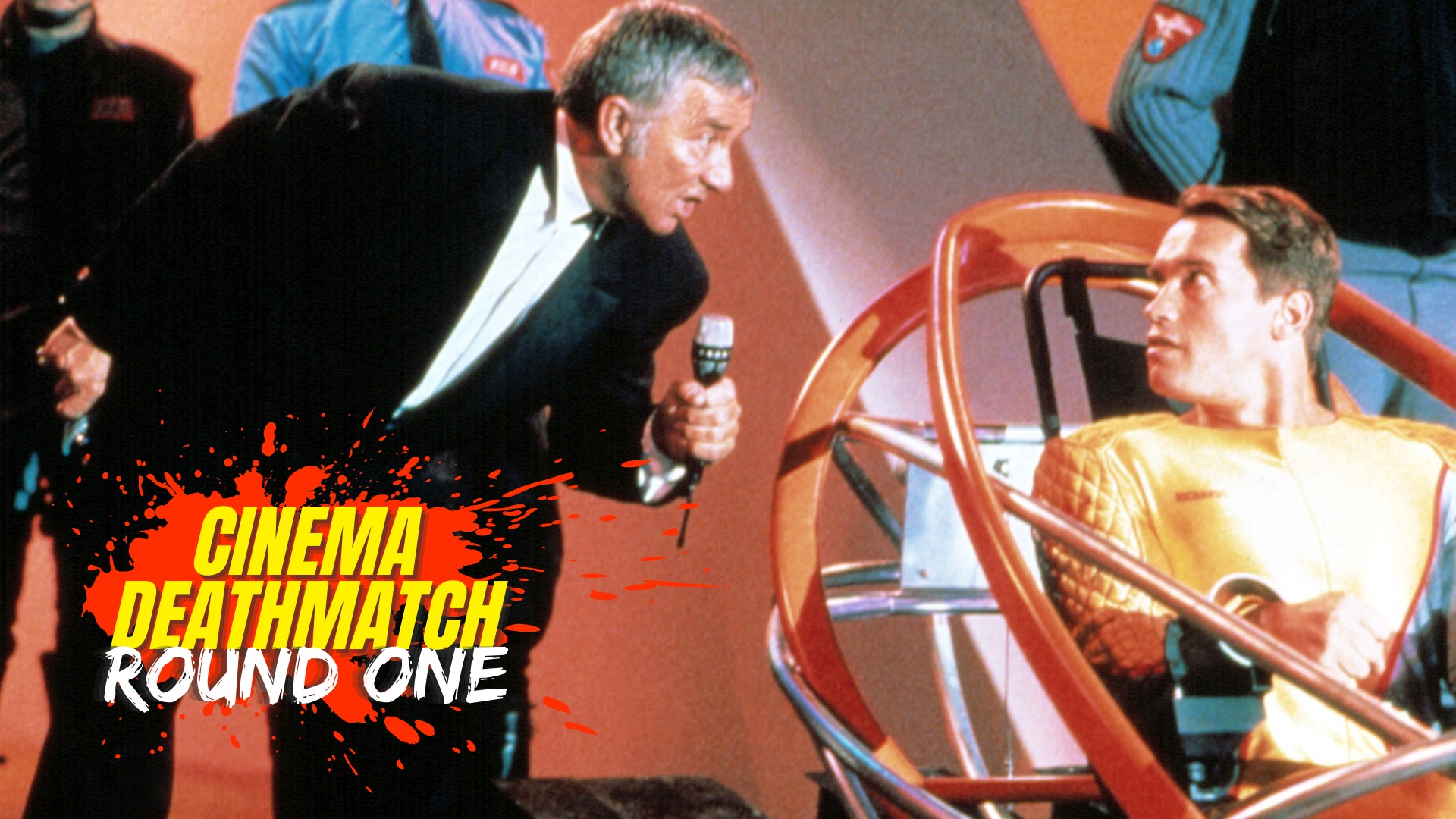 Everyone knows that sex and violence sell. Less acknowledged is the fact that condemnation of sex and violence sells. Puritans enjoy the frisson of voyeurism; voyeurs wouldn’t have any taboos to pruriently violate without the opprobrium of puritans. What fun is a primal scene if you’re supposed to see it?

Facets’ Cinema Deathmatch: Round One luxuriates in the double pleasure of taboo with a double feature of gore for you to love and hate. The Running Man (1987) and Battle Royale (2000) both stage bloody spectacles that the viewer is supposed to simultaneously and self-consciously enjoy and condemn. They are movies that embrace their own self-aware hypocrisy.

Both Running Man and Battle Royale fit into a long history of what might be called moral-panic entertainment. Exploitation cinema like Reefer Madness (1936), Anita: Swedish Nymphet (1973), and Unfriended (2014) encourage viewers to condemn up-to-the-minute iconically antisocial trends like drug use, free love, and social media bullying even as they enjoy the spectacle of sex, violence, chaos, and bad behavior. Reality television series like The Kardashians and The Bachelor are based on a similar dynamic; they feature shallow, messy, physically attractive protagonists you love to hate, and hate to love.

The Running Man borrows the scuzzy B-movie production look of exploitation cinema for a plot that foreshadows reality television contests. Set in the then-future authoritarian police-state dystopia of 2017, it features Ben Richards (Arnold Schwarzenegger), a police helicopter pilot who refuses to fire on civilian protesters. As punishment, he’s forced to become a contestant on The Running Man, a television game show in which convicts are chased down and executed by costumed celebrity stalkers.

See also  Who are these local and international BL stars we adore so much?

The MC of The Running Man show within the movie is Damon Killian, played by real-life Family Feud MC Richard Dawson. Dawson seems to be having the time of his life hamming it up as a caricature of himself. Hysterically excited audience members rush up to kiss him as he announces executions and offers them Running Man board games. “Americans love television,” he tells Ben with carny candor. “They wean their kids on it. Listen. They love game shows, they love wrestling, they love sports and violence. So what do we do? We give ’em what they want!”

What they want is also what you, the viewer, want. Ben murders Killian right after that speech, and you’re supposed to cheer.

For that matter the studio and television audience onscreen pivots seamlessly from rooting for Ben to die to rooting for Ben to murder. Killian urges an elderly lady named Agnes to choose which stalker she thinks will make the next kill. She hesitates, then decides to back Ben. “I can pick anyone I choose. And I choose . . . Ben Richards. That boy’s one mean motherfucker!” she exclaims.

Soon everyone is betting on Ben, and the callous crowd in the dystopian future merges with the callous crowd watching a Schwarzenegger pic. Violent spectacle is immoral and shallow—unless you’re on the side of the hero, in which case it’s good, not-so-clean fun.

Battle Royale, like Running Man, is set in a near-future dystopia. This totalitarian state is especially focused on policing children; every year one high school class is chosen to be shipped to an island, where the students are equipped with weapons and forced to battle each other to the death until only one remains.

The battle is directed and controlled by teacher Kitano (Takeshi Kitano) who was bullied and humiliated by the students. Kitano tells the students they’re to blame for everything that’s gone wrong with the country because they lack discipline and respect; the blood and carnage is a moral lesson in proper manners. That’s how viewers are supposed to view the film as well. The bloody spectacle is an opportunity for you to be horrified at the bloody spectacle. Kitano’s own righteous death restores order and justice, just as Kitano sees the children decapitating each other as a restoration of order and justice.

Critics sometimes say that films like Running Man and Battle Royale implicate the viewer. When you watch them, you’re supposed to recognize the ickiness of your own enjoyment of uber-violence. But isn’t the ickiness also part of the enjoyment? Moral panics work in part because people enjoy feeling pure, but also because they enjoy reveling in a debasement which they can both embrace and disavow. Do moral panic films critique those pleasures, or do they simply reproduce them? Perhaps there isn’t even a difference when part of the pleasure of The Running Man and Battle Royale is watching yourself watch your own corruption in the mirror of the screen.

What Really Happened To Leo In Kaleidoscope

Ruben Randall - January 10, 2023 0
TV/Movies
Leo Pap was the mastermind behind the heist in Kaleidoscope and had a shocking ending in episode Pink. Here is Leo’s Kaleidoscope twist explained....

Fintech valuations are in free-fall after soaring in 2021