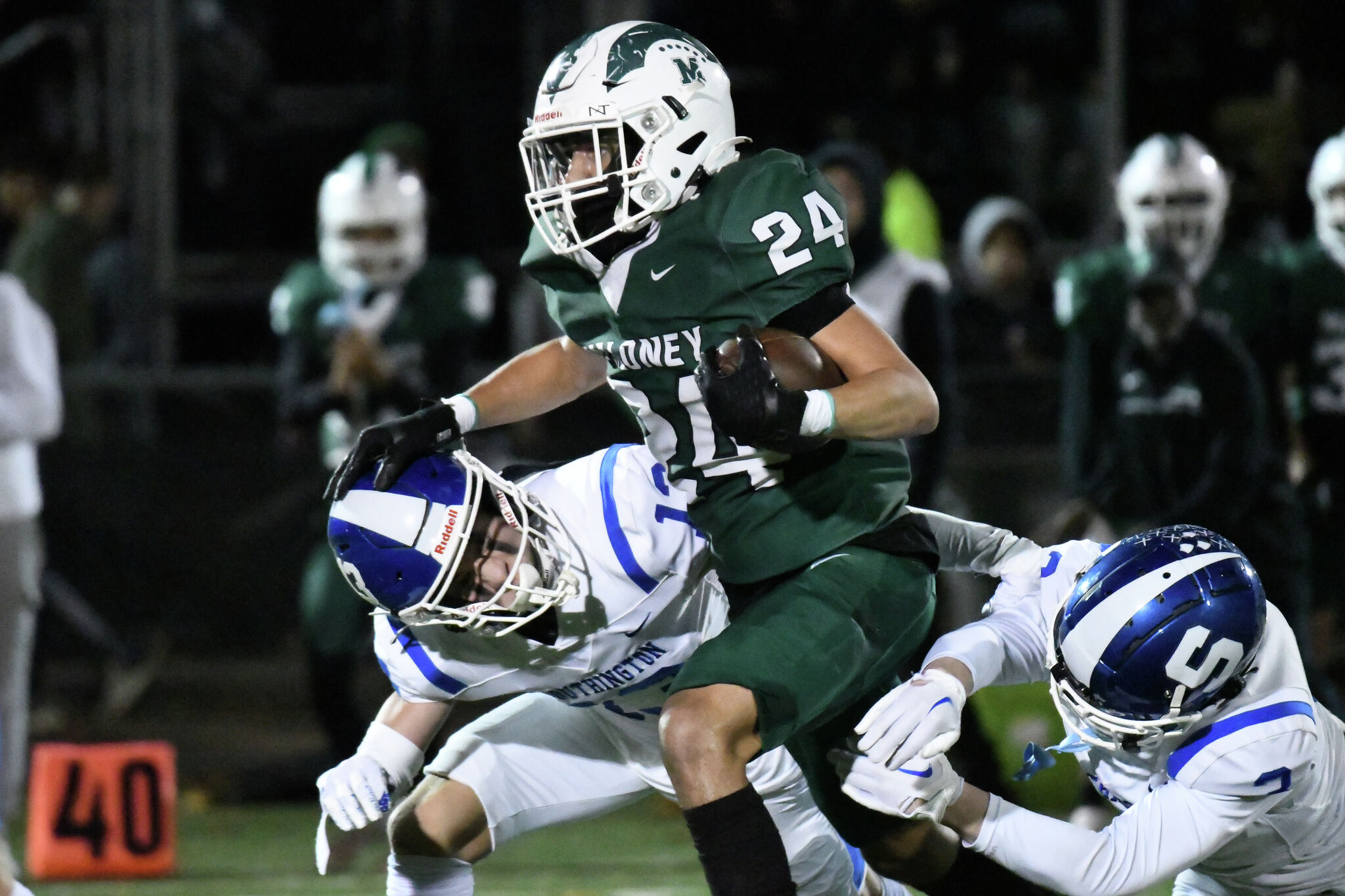 Keith Agba, CREC co-op: Freshman threw two touchdown passes, including the 67-yard winner to Elijah Williams, and ran in the two-point conversion that finished the scoring in a 22-15 win at Plainfield.

Brandon Alvarado, Wilcox Tech/Kaynor Tech: Ran for 287 yards and four touchdowns on 15 carries, was in on eight tackles, forced a fumble and recovered a fumble in a 49-20 win over Platt Tech.

Jonathan Angione, McMahon: Ran for 255 yards on 19 carries with two touchdowns in a 36-6 win over Bridgeport Central.

Zy’kie Askew, Middletown: On only seven carries, ran for 149 yards and two touchdowns in a 55-20 win over South Windsor.

Josh Boganski, Maloney: Ran for 170 yards and three touchdowns in a 31-28 double-overtime win over No. 1 Southington.

Darnell Bronson, New Milford: His 22 carries, 143 yards and three touchdowns included a 20-yard run in the fourth quarter to break a tie in a 28-21 win over Bunnell.

Paddy Brown, Newington: Ran for three touchdowns and, after Brendon Piggott recovered a fumble near midfield, threw a 9-yard touchdown pass to Akari Rosemond in the final minute and completed a two-point conversion pass to Josiah Ross for the winning score in a 28-25 win over Simsbury. Was 24-for-41 for 336 yards in all.

Freddie Camp, Gilbert/Northwestern/Housy: Scored on a 69-yard punt return and a 14-yard run in the Mountaineers’ 75-28 win over Derby.

Michael Citarella, Trumbull: Left tackle led an offensive line that helped the Eagles to a 28-13 win over Ridgefield.

Mickey Covino, St. Joseph: Five catches for 101 yards and a touchdown in a 17-13 win over Stamford.

Seth Cunningham, Thames River: A 22-yard touchdown run put him over 4,000 career rushing yards in a 42-0 win over Cheney Tech.

Nick Cuomo, Oxford: Ran for two touchdowns and 115 yards on nine carries in a 40-6 win over St. Paul.

Dom DeLuca, Greenwich: Caught three passes for 95 yards and a touchdown in a 59-6 win over Danbury.

Kaden DeWallace, Lyman Hall: Opened a 54-6 win over Bassick with a 70-yard kickoff return for a touchdown.

Thomas Dreibholz, Killingly: Was 5-for-5 passing for 208 yards and three touchdowns and 8-for-8 on PAT kicks in a 56-7 win over Waterford.

Ricky Feola, Shelton: His 75-yard interception return was the first of four consecutive Gaels touchdowns in a come-from-behind 34-14 win over Cheshire.

Darren Gasparri, Woodland: Ran for a touchdown and threw a touchdown pass as the Hawks built a 20-point lead and beat Naugatuck 20-7.

James Green, Ledyard: His second touchdown, a 4-yard score in overtime, gave the Colonels a 26-20 win over Windham.

Frankie Guerrera, Rocky Hill: Another 159 yards and two touchdowns on 37 carries in a 20-14 win over East Catholic.

Jett Hall, Naugatuck: Opened the scoring with a 75-yard touchdown run in a 47-0 win over Torrington.

Dylan Jackson, Masuk: Completed 18 of 23 passes for 240 yards and three touchdowns, all in the first half of a 46-12 win over Pomperaug.

Chris Kaminski, Ansonia: Threw for touchdowns of 47 and 60 yards in the second quarter to put away a 48-0 win over Watertown.

Camren Kemp, Hamden: Ran 20 times for 146 yards and two touchdowns as the Green Dragons stayed unbeaten with a 35-0 win over Hillhouse.

Jace King, Bacon Academy: His 50-yard reception set up his team’s first touchdown, and his interception finished off a 14-13 win over New London to end a 17-game losing streak.

Drew Kral, Fairfield Prep: Forced and recovered a fumble on the opening kickoff of a 14-7 win over Notre Dame-West Haven.

Connor Lavore, Avon: Ran for 180 yard and three touchdowns on 30 carries in a 31-21 win over Plainville.

Jamel Lee, Wilbur Cross: Ran for 197 yards on 18 carries and scored five touchdowns in a 32-14 win over East Haven.

Logunn Lee, Foran: Returned a kickoff 79 yards for his team’s final score, then blocked a potential tying extra-point kick to preserve a 35-34 win over Guilford.

Luke Maher, Granby/Canton: Returned a fumble 98 yards for a touchdown, setting a state record with his fourth fumble-return score of the season, in a 38-22 win over Morgan.

Malachi Mapp, Rockville: Ran for 175 yards on 26 carries, including three touchdowns and a tying two-point conversion on the way to a 27-20 win over Capital Prep.

Marcus McGregor, Woodstock Academy: Blocked a punt and recovered in the end zone for a touchdown in a 38-20 win over Fitch.

Jacob Rand, Valley Regional/Old Lyme: Ran for a touchdown, kicked an extra point and threw for a two-point conversion in a 22-14 win over the Stafford co-op.

Armani Reid, West Haven: Scored three touchdowns, two in the air and one on the ground, in a 48-6 win over Harding.

Amari Robinson, Platt: Scored four touchdowns – one rushing, one receiving, one off a fumble and one on a kickoff return – in a 50-0 win over RHAM.

Dan Rodriguez, Kennedy: Ran for 196 yards and two touchdowns on 17 carries in a big 41-34 win over Waterbury Career Academy.

Michael Rossetti, Seymour: His five catches included two for touchdowns, adding up to 90 yards in a 37-9 win over Wolcott.

KinKaid Rubino, Griswold/Wheeler: Ran for 80 yards and two touchdowns to pace a dominating rushing attack, and he kicked a 26-yard field goal in a 22-12 win over Stonington.

Michael Scott, Crosby: One of three 100-yard rushers behind a strong offensive-line effort, he scored three of the Bulldogs’ last four touchdowns, the last one to put away a 58-50 win over Wilby.

Danny Shaban, Barlow: Three touchdown runs (and 127 yards on six carries) and two touchdown passes in a 49-0 win over Bethel.

Luke Shannon, Glastonbury: Scored on a 93-yard interception return in a 35-0 win over Conard.

Bode Smith, Hall: Threw three touchdown passes, then ran for one in the Titans’ 35-6 win over East Hartford.

Caleb Smith, Newtown: Took the opening kickoff 89 yards to the end zone, ran for a touchdown and caught a touchdown pass in a 40-8 victory at Stratford.

Russell Smith, SMSA co-op: Caught a 5-yard touchdown pass and opened the second half with an 81-yard kickoff return for a touchdown in a 34-9 win over Haddam-Killingworth.

Hunter Telesco, New Canaan: Ran for 134 yards and two touchdowns on 11 carries in the Rams’ 42-20 win over Fairfield Ludlowe.

Michael Wall, Wilton: Caught a 9-yard touchdown pass in the third quarter and was perfect on four extra points as the Warriors built a 28-point lead and beat Fairfield Warde 28-14.

Chilli White, Windsor: Ran for a touchdown, caught a touchdown pass and returned a kickoff 81 yards for a score in a 47-14 win over Enfield.

Ruben Randall - August 10, 2022 0
Money
It is no secret that Los Angeles Lakers star LeBron James will push to become the highest scorer in NBA history. He is currently...