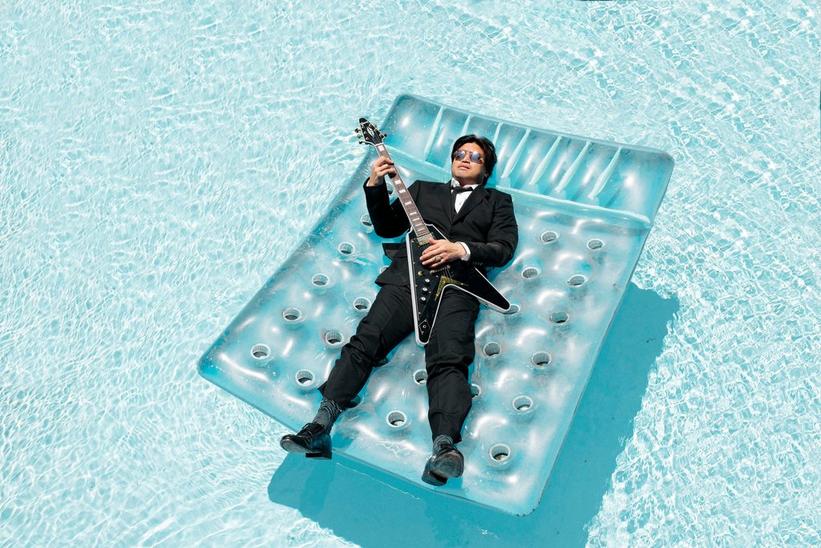 Silent partners are often obscured by overt counterparts — even more so when you’re in groups with Pharrell Williams. Producer and songwriter Chad Hugo actively chose the background.

As one-half of production crew the Neptunes and one third of hip-hop/rock group N.E.R.D., Hugo at times receded from public view during waves of massive success. The Virginia Beach-based musician would resurface to work with the likes of Jay Z and Rhianna, or Nigos’ recent reunion track, “Punch Bowl,” which featured old collaborators the Clipse.

All this is in line with Hugo’s withdrawn demeanor. He’s been called a silent savant for his consistent lack of hubris, despite three decades of enormous song credits. He’d rather emulate keyboard clinks than explain how things came about, taking umbrage with media when questions felt a bit constrictive: “What do you do after a magician reveals his tricks? That’s how I felt and through the years I’ve tried to refrain about getting into music theory with people because artists have a freedom that comes without getting too technical,” he tells GRAMMY.com.

Hugo and Williams met in band camp as teenagers, and famously wowed pioneering producer Teddy Riley at a local talent show. Riley took them under his wing, ushered the pair into the music industry and set them loose at his famed Future Records Recording Studios in Virginia Beach. The experience was “mind blowing,” Hugo recalls. Riley would later sign the Neptunes to Virgin Records in 1999.

By the time they reached their twenties, Hugo and Williams were among the industry’s most successful songwriting duos. The Neptunes’ diverse sound helped define modern pop music in the 2000s, and they became the go-to brain trust for top tier acts. Following “Superthug,” Noreaga’s highest charting hit ever, the Neptunes caught the ear of Jay Z, who introduced them to Justin Timberlake, whose solo debut they produced the majority of. Consider 2004’s “Drop It Like It’s Hot,” a hit that not only gave Snoop’s career a much needed shot of adrenalin, but remains lodged on commercial radio to this day.

They’ve since worked with Gwen Stefani, Ed Sheeran, Britney Spears and a laundry list of others. Standout moments with Kendrick and Andre 3000, too. Two GRAMMY Awards followed, including Producer of the Year, Non-Classical, and Best Pop Vocal Album for Timberlake’s Justified.

On June 16, Hugo and Williams will be inducted into the Songwriters Hall of Fame — a club that includes the likes of Burt Bacharach, Bruce Springsteen and Curtis Mayfield. Despite his reserved nature, the honor is not lost on Hugo, who came close to gushing: “I always considered myself a studio rat, just offering touches to songs or whatever I could add. I feel so blessed to do that and to be recognized for this.”

Here, Hugo rather openly – and perhaps uncharacteristically— spoke on how both his immigrant experience and rapport with Pharrell impacted his worldview and musical philosophy. These days, Hugo luxuriates in the fundamental sounds that inform his futurist pursuits.

I’ve read that you’ve recently immersed yourself in the blues and making connections between swing and hip-hop. Unpack that a bit for us.

With all the crazy times we’ve gone through, the blues seemed like such an appropriate soundtrack for everything. Without getting too dark, things were getting crazy with the pandemic — for me and everyone I suppose. And with the blues, there’s chord changes and progressions that are rooted in people singing while working hard in the fields. There’s a connection with hip-hop that goes all the way back to the slave days.

In some ways, you can call the blues church. It has a mired, sad sound to it. The blues is a simple formula where you repeat mantras, say things that have happened, and things you want to happen, or just express sadness. I’ve just been concentrating on that, playing jazz, bebop, and swing and just American music from earlier times.

You’ve been sitting in with local music educators and bands from Virginia Beach. What’s that interaction been like?

I’d like to touch on your early history a bit. Teddy Riley discovered you and Pharrell and next thing you know, you’re in his studio. What was that experience like?

I remember when we went to Future Records it looked like a surf shop [laughs]. I remember seeing fancy cars you don’t see in the suburbs of Virginia. Pharrell and our other friend, Mike Shae, and I went to Future after the talent show and we caught the ear of Omar Chandler, who eventually became our manager.

I remember seeing lots of records being made. They had three private studio rooms and loud music was blaring through the speakers at all times. It was like a big factory: engineers everywhere and people at desks and everyone was there just to make sounds. It blew me away.

What do you remember specifically about Teddy? How did he strike you?

I remember seeing Teddy reacting to all the rhythms that were coming out of the speakers. It was awesome seeing him react to the music. He’d also walk over and mute or turn sounds up on this huge multi-track mixing board. He was orchestrating things. Just seeing how his operation ran as an institution was incredible.

I wasn’t too familiar with Teddy to be honest. Back then, Future Records was a scene itself. Black Street was there of course. It felt like its own nightclub. We were too young to go there late at night [laughs] and just wanted to be a part of everything and make some dope sounds. It was nice seeing Teddy control all of that.

A lot has been made of Neptunes’ radio hits, but not all were radio friendly. Your work with The Clipse gained a strong following despite much radio play. In your recent GQ profile, Pusha T called you a genius. What are your thoughts on Pusha and tell us what you remember from that era.

The street life stuff he raps about, I can’t say I witnessed it. Probably a good thing [laughs]. But really, I think he’s just telling stories through his music. I remember him getting to the studio and stretching out his arms and having a notepad to write things down.

At the time, we were like a utilitarian swiss army knife. We would add this and that as needed, you know, make vibes and ultimately to make dope records. Pusha has always been ’bout it and had such a positive attitude. We had two schools of thought in the studio. Pusha wanted to make people move with his words and we wanted to make people move on the dancefloor. So it was truly different frames of thought that came together.

I know that you come from an immigrant household. Given that this is AAPI month, we’d be remiss to not touch on how being a child of immigrants may have impacted your outlook on music.

My parents came from the Philippines and we were in Jersey before moving to Virginia Beach. My mother was a med tech, dad was in the Navy.

We had a piano growing up, which was the go-to entertainment system in our house. I’m the youngest of three, and my sister and brother would convene at our piano teacher’s house to play. We’d always play music for my parents’ friends from the Filipino community. They were always working and did what they could. They cooked for us when they had time and tried to have us speak Tagalog. We knew the bad words of course [laughs]. Enrolled us in Catholic school where we had to wear uniforms and having to wear a tie and shirt teaches you that you’re in the same institution and situation as others. One of the first hip-hop people I met was a Filipino pop-locker at one of the community centers we’d frequent.

What are some of your earliest memories of being exposed to music?

I grew up off of everything. Earliest memories would probably be church songs, then things like “The Sound of Music,” where I learned all those “do-re-mi” notes. I always had an idea… that there is such a concept as sounds and [knowing] how they connect to instruments and electronics. Also, I watched a lot of old TV shows, black and white shows from the ‘60s and ‘70s and still remember all their theme songs.

You essentially went from watching those TV shows to winning GRAMMYs in a matter of years. What did winning a GRAMMY feel like?

I felt like we made it. We made those records, you know? There’s one thing my band teacher used to say, which is you’re only as good as your last performance. If you didn’t practice the part that was given to you on the sheet music, then you’re only as good as that. Where you take it from there is the main question. So there was always pressure to win, sometimes too much. But that was a memorable day for sure.

Moving towards now, I also read about your recent saxophone lessons. Why the sax specifically?

I just decided to keep up with it. I played it in my elementary years and for my latest sessions, I’ve been using a sax I bought when I lived in California years ago. I’m glad I put it to use. The whole idea was to learn riffs that I kept hearing, so I just wanted to brush up on my playing as a instrumentalist musician. I just love hearing tones from the sax.

The idea of working out my fingers has always been important to me. Certain people know the gym routine better than others, so this, to me, is just doing a better routine. Shout out to my teacher, I still have to turn in my most recent homework assignment [laughs].

We need to talk about your recent induction into the Songwriting Hall of Fame. After GRAMMYs and all your successes, how does this one feel?

Man, it’s just a huge honor. What I gathered recently was that the Songwriters Hall of Fame was founded by Johnny Mercer from the Tin Pan Alley days. I mean, he released a version of “Jingle Bells” in the ‘40s! He wrote all these legendary standards. This is the hugest honor to be a part of.

It’s remarkable how your career unfolded and the monumental triumphs you’ve had. What’s next when it seems like you’ve already done it all?

Thankfully I’m always working. Right now, I’ve had a heavy focus on Filipino and Asian artists, and have been doing some great stuff with Jo Koy, Dan the Automator, and some amazing new artists like the Blssm and Eyedress.  It’s an honor to lift up my fellow Asian musicians and the next generation.

I’ve also been doing things with M.I.A. which I’m very excited about. I love these projects because they added an element of challenge. If I’m not learning or challenging myself, I lose interest pretty quickly.

Meet Son Lux, Composers Of ‘Everything Everywhere All At Once’

Are Tom Felton & Emma Watson Dating? We Have An Answer