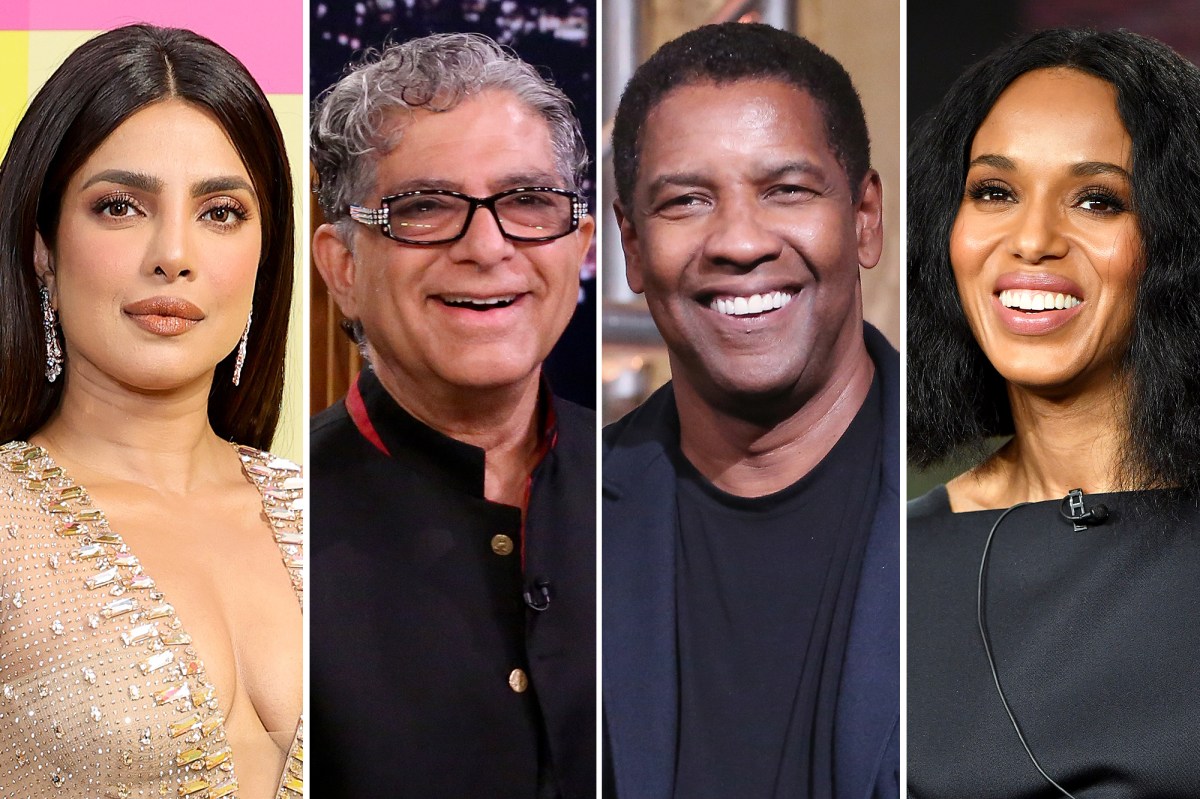 Not everyone with the same last name is related.

Rosie O’Donnell learned that the hard way this week when she accidentally told Priyanka Chopra she knew her father, Deepak Chopra. Unfortunately for O’Donnell, the two are not related.

In response, the “Isn’t It Romantic” star lambasted the former “View” host, “I have never taken myself so seriously to think everyone would know who I am, or my work for that matter. But if you wanted to make a public apology for a very awkward private encounter, I think probably best to take the time to google my name before doing it or even try to reach out directly.”

Here are other famous stars who share a last name, but are not related.

Martha Stewart and Kristen Stewart have no connection other than their name.Getty Images

Martha Stewart and Kristen Stewart may share a last name, but they are anything but related.

Martha notably turned her full name into a brand after founding Martha Stewart Living. However, Kristen first launched her Stewart name into stardom after playing the lead in the “Twilight” saga films.

Serena Williams has siblings, but Vanessa Williams isn’t one of them.Getty Images

Serena Williams has a sister and it’s not Vanessa Williams.

Vanessa made the Williams name famous when she was crowned as the first African-American Miss America in 1984. She has since taken up an acting career, starring in “Desperate Housewives” and “Ugly Betty,” and also recorded two studio albums.

Serena and her real older sister Venus, however, made the Williams name a total hit as tennis champions, with a combined 30 Grand Slam singles titles.

The only thing Jessica Simpson and Cody Simpson have in common is they’re both singers … and have blond hair. But they don’t share any relatives.

Jessica became one of the world’s biggest pop stars in the late ’90s and snowballed her success into a billion-dollar fashion and footwear empire.

Cody, on the other hand, is known for being an Australian singer who notably dated Miley Cyrus in 2020.

See also  Watch: Seo In Guk And Park Bo Young Can’t Stop Laughing Behind The Scenes Of “Doom At Your Service”

Jennifer Lopez and Mario Lopez are not siblings.

While Mario was busy breaking hearts as AC Slater on “Saved by the Bell” in the ’80s and ’90s, Jennifer was just getting her foot in the door. After shooting to superstardom with her 1997 role in “Selena,” Jennifer’s fame would soon surpass Mario. And while they both have acting chops, the “Marry Me” actress and Extra host don’t share any blood.

While Robin Williams and Michelle Williams share many things including being four-time Oscar nominees and Emmy winners, they do not share a family tree.

The pair both started off on TV with Robin rising to fame on “Mork & Mindy” and Michelle on the teen drama “Dawson’s Creek.” They both went on star in critically acclaimed films. Robin died by suicide in 2014.

All the Moore reason to assume they’re unrelated.

Mandy Moore and Demi Moore are not part of the same family.

Demi made a splash in Hollywood as a member of the famed ’80s Brat Pack and went on to star in movies like “Ghost” and “Striptease,” while Mandy has also been showing off her acting chops in “This Is Us.” However, Mandy got her start in the music world with the ’90s pop hit including “Candy.”

It would be a “Scandal” to think these two are related.Getty Images

Denzel Washington and Kerry Washington are not related and it would be a “Scandal” to assume so.

Denzel has made a career for himself both on the stage and on the big screen, winning a Tony and multiple Academy Awards.

Meanwhile, Kerry gained recognition on the small screen in her hit ABC drama “Scandal” for which she received two Primetime Emmy Award nominations.

Kristen got her start on Broadway but she made the Bell name famous when she starred as everyone’s favorite marshmallow Veronica Mars in the early 2000s. She earned high praise for her role in “The Good Place” as well as the movie “Forgetting Sarah Marshall.”

Drake, meanwhile, got his start on television, starring in Nickelodeon’s “The Amanda Show” and “Drake & Josh.”

Audrey Hepburn and Katharine Hepburn were two of the most glamorous women in Hollywood history, but they don’t share any family history.

Katharine was a Hollywood leading lady, with her career spanning over 60 years. She won four Academy Awards for Best actress — a record that has yet to beat.

Meanwhile, Audrey won an Oscar for her breakout film “Roman Holiday.” Other big titles include “Sabrina,” “Breakfast At Tiffany’s” and “Charade.” Audrey was also known for being a style icon.

No one is wondering whether Mariah Carey and Drew Carey share family members.Getty Images

It’s quite obvious that Mariah Carey and Drew Carey don’t share any family.

Mariah rose to fame with her debut album in 1990 and has since won five Grammy Awards, 19 World Music Awards, 10 American Music Awards, and 15 Billboard Music Awards. She’s also been dubbed the “Queen of Christmas” for her classic “All I Want for Christmas is You.”

Drew also got his start in the ’90s as a standup comedian until he had his breakout role starring on “The Drew Carey Show” from 1995 until 2004. He began hosting “The Price Is Right” in 2007.

Sorry, these two singer’s share nothing but a last name.Getty Images

Both Jesse McCartney and Paul McCartney have sang tales of love, but that doesn’t mean they’re biologically related.

Jesse got his start on “All My Children” in the late 1990s before gaining fame with boy band Dream Street. He eventually went solo with his album “Beautiful Soul” in 2004 and appeared on shows including “Greek” and “Young & Hungry.”

Meanwhile, Sir Paul is a British singer, songwriter, musician and record and film producer who rose to fame as one of the singers for the Beatles. Even after the iconic band disbanded in 1969, Paul kept his solo career strong and continues to tour.

While there is a Randy Jackson related to Michael and Janet Jackson, it’s not the “American Idol” host.Getty Images

It’d be pretty “Bad” to get Randy Jackson confused with siblings Janet and Michael Jackson.

Even though Janet and Michael have a Randy Jackson sibling, it’s not the “American Idol” judge, who rose to fame as a music producer.

Michael was dubbed the “King of Pop” with one of the most significant four-decade long music career and Janet had her own success as a five-time Grammy winner.

Camila Mendes is not a fan account for Shawn Mendes and his ex-girlfriend Camila Cabello.Getty Images

Camila has had her own significant accomplishments with a starring role on the hit CW series “Riverdale” and has since acted in other rom-coms and thriller movies.

Shawn, on the other hand, has been in the spotlight since becoming a teen heartthrob on Vine. He’s since released four studio albums that include hits like “Stitches,” “Señorita,” “There’s Nothing Holdin’ Me Back” and more.

There’s a reason it’s not M-Rod and A-Rod.

Michelle Rodriguez has been a leading lady since starring in the 2000 film “Girlfight” and won several awards for her role. She then appeared in other notable movies like “The Fast and the Furious,” “Resident Evil” and “Blue Crush.”

Meanwhile, Alex, a.k.a A-Rod, has had one of the most successful MLB careers, playing a total of 22 seasons for for the Seattle Mariners, Texas Rangers, and, most notably, the New York Yankees. Alex retired in 2016 but has kept busy doing various sports broadcasting and working on his company, A-Rod Corp.

Ruben Randall - June 18, 2022 0
Actor
It’s safe to say that at this point in his career, the love for Daniel Radcliffe is pretty much universal. Being in...