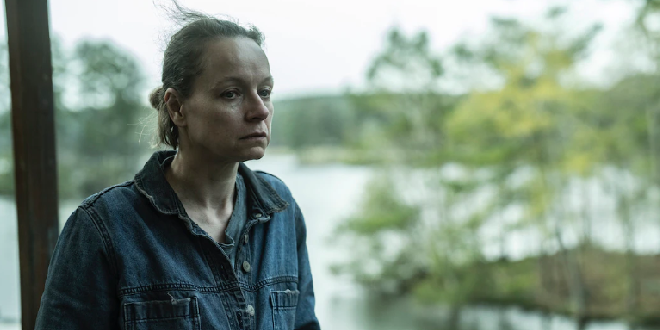 Welcome to this week’s edition of MuggleNet’s Casting News! After we saw the first-look image of Helena Bonham Carter and a new Ralph Fiennes clip last week, we’re turning to Samantha Morton for first looks this week. We’ve also finally got a release date for the latest Neil Gaiman adaptation. Castium Revelio!

First up, though, is a foray into a new world for Ciarán Hinds (Aberforth Dumbledore). He’s narrating a new podcast series for RTÉjr Radio. The podcast is called The Neighbourhood and will include nine episodes that will all tell tales of children’s bravery and kindness. Each episode is told from the perspective of a different child, but all of them are set in the same neighborhood.

Timothy Spall (Peter Pettigrew) will also play the lead for an upcoming project. He’ll play murder victim and inspirational lecturer Peter Farquhar in the BBC drama The Sixth Commandment. The show follows the confusing and twisting case of Farquhar’s murder, for which one of his students is currently serving a life sentence.

Harry Potter composer John Williams has made the front page of next month’s edition of Gramophone magazine! The magazine will celebrate his work outside of the film industry, specifically his Violin Concerto No. 2, which he recorded recently with Anne-Sophie Mutter. Take a look at the cover below!

While Williams has been working on magazine shoots, James and Oliver Phelps (Fred and George Weasley) have been shooting rounds at St. Andrews golf course in Scotland. Sixty celebrities were invited by fashion company BOSS to play the historic course before the professionals take to the stage for the British Open in the coming months.

We finally have more news about Netflix’s adaptation of Neil Gaiman’s graphic novel series The Sandman! We have a teaser clip, a release date, and character posters. Unfortunately, neither David Thewlis (Remus Lupin) nor Stephen Fry (narrator of the UK Harry Potter audiobooks) has a poster dedicated to his role, but Thewlis is included in the teaser. The show will be released on Netflix on August 5.

Not only did Netflix release information about The Sandman, but the streaming service also announced the full voice cast for its animated music-based series Entergalactic. Jessica Williams (Eulalie Hicks) has joined the cast for the show, which is set to showcase the music from rapper Kid Cudi’s latest album. Check out the first clip of the show below!

Colin Farrell (Percival Graves) is set to star in a new spy series for Apple TV+. We don’t know much about Sugar yet, but it will reportedly be a genre-bending private detective plot set in Los Angeles. Apple officially put out the series order for the show this week, having secured the rights to the script at the end of last year.

Next up is a first-look image of Samantha Morton (Mary Lou Barebone) in Tales of the Walking Dead. She’s returning as Alpha for the Walking Dead spin-off show, although the character has been renamed Dee. The show’s first two episodes will air on August 14, with the remaining episodes airing each Sunday. Check out the image of Morton below.

Ending this week’s edition is an exciting announcement from Harry Potter and the Cursed Child producer Sonia Friedman. Her production of Tom Stoppard’s Vienna-based play Leopoldstadt will start a run on Broadway later this year! Preview performances will begin on September 14, with opening night on October 2. The show has had two runs on the West End, one in early 2020 and the other in late 2021. Tickets will go on sale on June 29.

That’s a wrap on this week’s Casting News! Which of these projects are you most excited to see develop in the coming months? Let us know in the comments below.

Daniel Radcliffe Once Revealed He Didn’t Talk to Emma Watson for Days After an...

Seo In Guk And Oh Yeon Seo Share Glimpse Of Their...