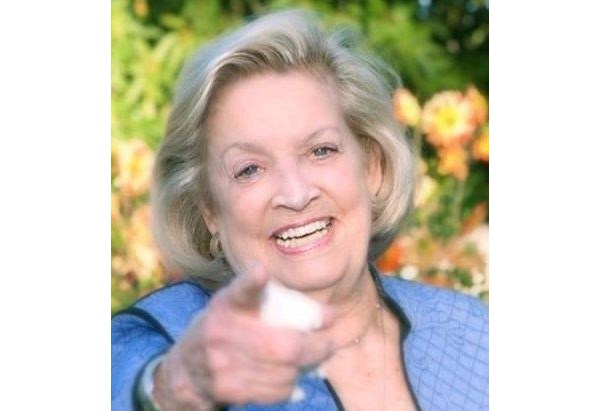 95, a Maryland native who spent most of her life in Missouri, left a life she loved on April 1, 2022, in St. Louis, with all five of her daughters by her side in her final days.

Carlyn was larger than life, a true original. She was known for her devotion to her children and grandchildren, tireless energy, steely resolve, elegance, intelligence, humor and her love story with her husband of 35 years, William C. Myers Jr. (“Bill”), who died in 1983.

Carlyn was yearbook editor, a cheerleader and lettered in basketball at Wicomico High School in Salisbury, class of 1944. She loved to dance and won a jitterbug contest. During World War II, she was a civilian volunteer aircraft spotter.

She worked part-time as a reporter on The Salisbury Times, then followed her dream to attend the top-ranked journalism school – University of Missouri at Columbia. At Mizzou, Carlyn met a dashing World War II bomber pilot, Bill Myers, a law student. They were married July 5, 1947, at a Salisbury Episcopal church. They lived in Columbia until both graduated, Carlyn with a bachelor’s degree in English. They soon settled and raised a family in Bill’s hometown of Webb City, Mo., where he was a prominent attorney.

Carlyn was a doer. If it needed to be done, she delivered with unmatched flair. She was involved in countless family and personal activities in the region, including at the First Presbyterian Church in Webb City, and Twin Hills Golf & Country Club in Joplin, Mo. She was an enthusiastic elementary school room mother for all five of her children.

A born competitor, she was an avid golfer, accomplished bowler, and a master card and bridge player. She won duplicate bridge tournaments into her 90s. Always a voracious reader, she finished 300 books one year and a 900-page book just months before she died.

In the late 1980s, Carlyn moved to Santa Monica, Calif., to be near two daughters and the ocean. She moved to St. Louis in 1992, where another daughter was having grandchildren. In those years, she was on Altar Guilds of Episcopal churches in Beverly Hills, Calif., and St. Louis County, respectively.

In St. Louis, Carlyn thrived as the family matriarch. She idolized her five grandchildren. They affectionately called her “Grandma Carlyn” and “Momo.” She passed down to them her zest for life, including making great fanfare of every holiday.

Services: A memorial service will be at 2 p.m. Saturday, May 7, at the Episcopal Church of St. Michael & St. George in Clayton, Mo.

Carlyn chose to be cremated. Her ashes will be interred at Mt. Hope Cemetery in Webb City, Mo.

In lieu of flowers, donations may be made in Carlyn’s memory to Evelyn’s House hospice in St. Louis.

Arnold Schwarzenegger’s son Joseph Baena reflects on the day ‘everyone found out’ who his...

DR MICHAEL MOSLEY: Why a bus pass isn’t the only perk...

Ruben Randall - May 28, 2022 0
Celebrity
There are lots of things that get worse as we age, from eyesight to reaction time, but I am delighted to say that...