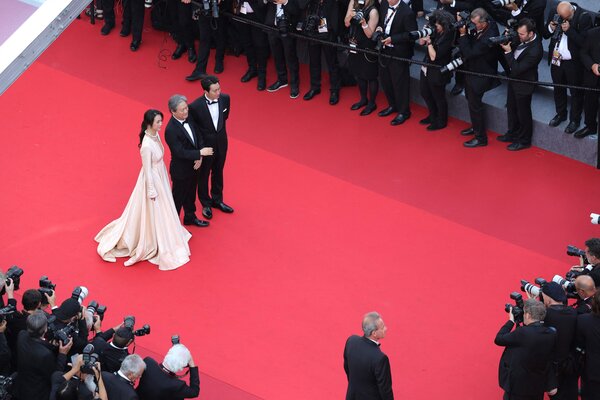 CANNES, France — Shorts made on TikTok haven’t been seen on the big screen in the Grand Théâtre Lumière just yet, but last week the video app was still accused of a Cannes faux pas: attempting to influence a jury’s decisions.

In March, TikTok announced that it would be an official partner of the Cannes Film Festival this year. Thierry Frémaux, the festival’s artistic director, was quoted saying that the collaboration was “part of a desire to diversify the audience” of the festival. Billboards that read “ceci n’est pas un film, c’est un vidéo TikTok” loom over the awnings across the street from one of the main movie theaters here.

TikTok also announced a competition for short films shot on its app. Although not an official festival event, the competition had a jury headed by the Cambodian-born filmmaker Rithy Panh, a survivor of the Khmer Rouge regime who has been a regular presence at Cannes with films like “The Missing Picture” and “Exile.”

But Panh quit as the jury’s president on Wednesday, he said, two days before the awards were to be given out, only to return to his role on Friday morning, hours before the awards ceremony. Panh said by email that he had quit because TikTok had “seemed to want to influence our decision about prize winners,” and that he returned to his post when the company agreed to respect the jury’s verdict.

“Their world, it’s not the art world,” Panh said in an interview later on Friday afternoon, sitting on a couch on the deck of the beachfront restaurant where he and his four fellow jurors had just given out the awards.

While declining to name names, Panh said some employees at TikTok had wanted to select different winners from the jury’s short list. It was “multiple people from TikTok,” he said. “One or two were very aggressive, very stubborn, very closed minded.”

TikTok issued a statement that seemed to attribute any trouble to ordinary disagreements in selecting winners. “As with any creative competition where the selection of a winner is open to subjective interpretation, there may be differences of artistic opinion from the independent panel of judges,” the statement said.

Even after receiving a guarantee that the jury’s choices would be honored, Panh said his first instinct was not to return to the jury. But he said he ultimately came back for the filmmakers. Some, he added, had traveled to Cannes from as far away as Japan or New Zealand. “You just can’t break their dream, you know?”

The ceremony on Friday was hosted by the social media personality Terry LTAM, who asked the jurors about their experiences watching the shorts. The Sudanese filmmaker Basma Khalifa said the judging process changed her perspective on the platform. “I didn’t give TikTok enough credit, I don’t think, for how much you can do with it,” she said.

Filmmakers from 44 countries submitted films to the competition, all between 30 seconds and three minutes in length. The top prize was shared between two directors: Mabuta Motoki, from Japan, whose film showed a man meticulously building a wooden tub, and Matej Rimanic, a 21-year-old Slovenian director who submitted a comedic black and white short in which two people flirt using a paper airplane. Rimanic said that working on social media platforms had sparked his desire to make movies.

“I started posting videos on Vine, then I went to Instagram and then TikTok came around, so I started posting on TikTok,” he said in an interview shortly after he received his award, a gold-colored statuette shaped like TikTok’s logo. “Now during this transition of me posting on videos on social media, I discovered my love for filmmaking.”

It was his first time at Cannes, either to attend the festival, or to visit the city. “I hope that one day I can come here with my feature film,” he said. “I only make comedies because the world needs more laughter.”

Ruben Randall - May 21, 2022 0
Celebrity
Placeholder while article actions loadLarry Ellison, the billionaire co-founder and chairman of the software company Oracle and the biggest backer of Elon Musk’s...