South Korean cinema went from strength to strength on Saturday, scooping two major prizes at Cannes for the first time in the country’s history.

In his acceptance speech, Park, 58, spoke of the challenges the pandemic had presented: “Fans didn’t visit movie theatres, but it was the time that we were aware of the value of cinema,” he said. “As we have hope and power to overcome this pandemic, I believe that we cineaste will keep theatres and cinema for good.”

Park is only the second South Korean director to win in his category, 20 years after Im Kwon-taek won for historical drama Chihwaseon.

Song’s best actor prize was his first, and he is now the first South Korean male actor to win an acting prize at Cannes.

“I couldn’t help running to him,” said Park, who hugged Song after his win. “He has appeared in many good films, and it is time for him to win the prize.”

Song said: “I’m so moved as an actor who has worked with director Park and joined hands with him in winning a prize with Thirst. I’ll not forget the moment when he ran to me and embraced me.”

The dark thriller helped catapult South Korean cinema on to the global stage – years before Parasite, which won the 2019 Palme d’Or and best picture at the 2020 Academy Awards. 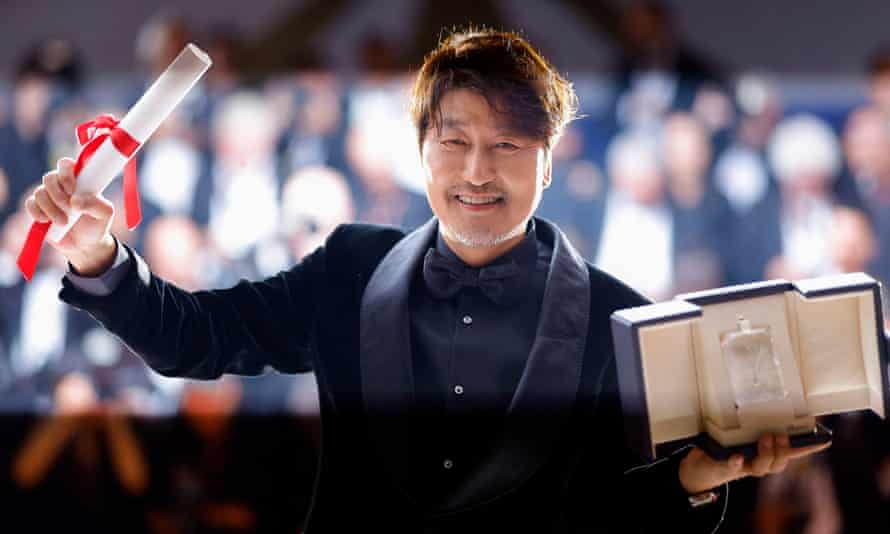 Decision to Leave features Chinese star Tang Wei and Korean actor Park Hae-il and tells the story of a detective who, while investigating a man’s fatal fall from a mountain, comes under the spell of the victim’s wife, whom he suspects of having caused her husband’s death.

“I’m not a romantic, but I’m very interested in the expression of emotions,” Park told AFP when the film premiered at the festival.

The film’s mesmerising soundtrack includes the Adagietto in Gustav Mahler’s 5th Symphony, immortalised in the 1971 movie Death in Venice by Luchino Visconti.

Park said the film drew inspiration from the methodical police work contained in the Swedish Martin Beck police procedural books. “That’s what I wanted to represent in a movie,” he said.

Song, 55, won acting honours for his role in Broker about a woman dropping off an unwanted child in a “baby box” for adoption. He plays a kind-hearted middleman trying to sell the infant to a loving family in the Japanese director Hirokazu Kore-eda’s first Korean-language feature.

Kore-eda won the Palme d’Or in 2018 for his touching family tale Shoplifters.

“I am very happy for my whole family,” Song said as he accepted the trophy at the gala ceremony on the French Riviera.

He said that the language and cultural barrier posed no problems on set. “Kore-eda is very familiar with Korean culture so there weren’t any differences when it came to getting along,” he said. “Japanese cinema is very familiar to Koreans. Personally speaking I’ve seen almost all the films made by Kore-eda. There’s lots of fans that love the aesthetics, which are typically Japanese.”

The Kang Dynasty Writer Has An Odd Avengers Recast Ideas