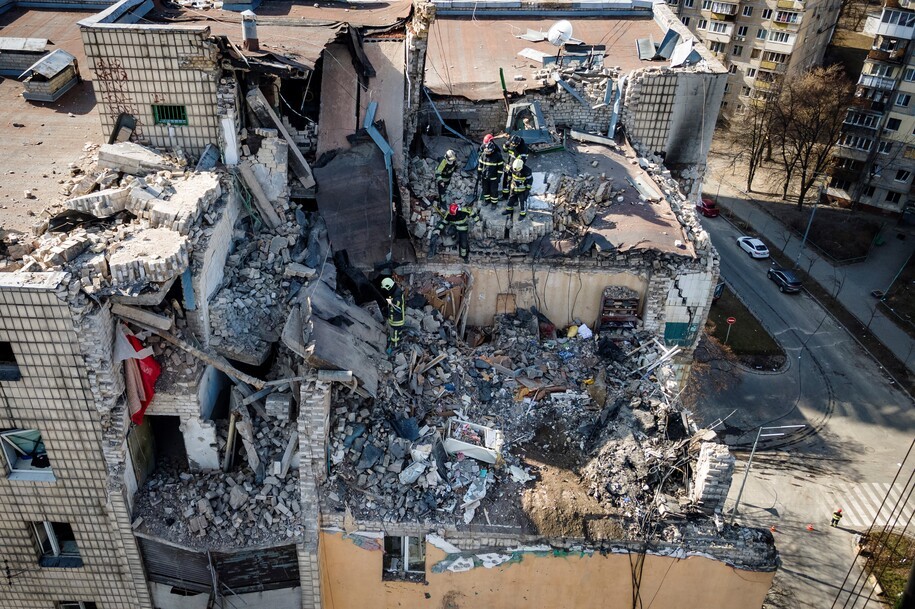 Firemen search the rubble of a residential building hit by a rocket in Kyiv. March 17, 2022.

When the Russian stock market closed on February 25, after losing over 60% of its value in under two days, it was news. When it stayed closed the next day, that was news. That it’s still closed three weeks later doesn’t even merit a mention. The daily updates on whether or not that market would resume trading have stopped. That Russian analyst who drank to the death of the market back on Mar. 4 may have seemed overly dramatic at the time, but he was absolutely correct in his assessment.

As Yahoo News reports, Russians are just waking up to the fact that whatever investments they made, any hopes for their financial futures are gone. And it’s not just stocks. “Until February 24 I was sure money in my bank or investment account would always be there to help me,” said one young woman. “But I was wrong. I understand that I am now completely unprotected.”

That lost of any fiscal security is one of the reasons that Bloomberg reports Russia is suffering an enormous “brain drain” with the country’s “best and brightest” making a “stampede for the exits.” An estimated 200,000 Russians fled the country in the in the first 10 days of the invasion for “Armenia, Georgia, Israel, Kazakhstan, Kyrgyzstan, Turkey—any country that admits Russians visa-free.” Both Turkey and Uzbekistan have added additional flights from Moscow and St. Petersburg. Those flights are leaving Russia full. The ones going back are all but empty.

Economically, Russia is done. The kleptocracy that spent decades skimming from an extraction economy while failing to fund public programs, education, infrastructure, or the military, has discovered that the well has a bottom after all. Moves to nationalize assets of manufacturers and retailers who have idled their operations only help to make sure there will be no second act.

Russia was already near the poorest nation in Europe when it came to the average wealth of citizens. Now that rapidly declining net worth places them far down the list — in the realm of crushing poverty. But at the same time, the cost of living in Russia is soaring and the services provided by the state are decreasing. Whether or not Russia defaults on its debts this week, its money is now fundamentally worthless outside its own borders. Whatever value it maintains inside those borders isn’t clear.

Underscoring all this is Vladimir Putin’s increasing calls for “purification” and spitting out the “scum and traitors.” And new legislation that imposes a 15-year sentence for reporting news that disagrees with the government. And thousands of arrests for protesters.

It was already clear that Putin has a fetish for restoring the Soviet Union—a name that both Putin and his advisers have repeatedly used in recent weeks when describing the Russian Federation. What wasn’t clear is that Putin’s admiration of all things Soviet included the bread lines, famine, labor camps, and political purges. Russia is going to get the restoration it deserves.

I have translated and added subtitles to the latest video speech by Vladimir Putin from two hours ago. Please don’t let it go in vain – I want everyone to see what a speech of true fascism looks like.

No further comment needed, it’s all here, in his speech pic.twitter.com/QEzsG9BODX

This statement is worrisome not because Russia has any genuine proof of biological weapons research insider Ukraine, but because it could be a preliminary step to giving Russian an excuse to use chemical agents — or even tactical nukes — against Ukraine. This is nothing but an effort on Russia’s part to claim that WNDs are already in use.

Ukrainian President Volodomyr Zelenskyy continues to work tirelessly to gain support for more supplies and more assistance in Ukraine. After speaking to the U.S. Congress on Wednesday, and speaking with multiple world leaders overnight, he spent Thursday talking to the German parliament.

“AfD” is “Alternative for Germany,” a right-wing nationalist party that has tried to get Germany to leave the European Union, and whose leaders were, unsurprisingly, supportive of Putin in the past. They had about 10% of the vote in the last election and were strongest in the areas of former East Germany.

Speaking to the members of the Bundestag, Zelenskyy told them that the West is placing “a wall” around Ukraine rather than giving it all the assistance it needs.

Zelenskyy: “You find yourselves once again behind the wall. Not the Berlin Wall, but in the heart of Europe, where there is freedom. This wall is getting stronger, with every bomb that falls on our soil in Ukraine, with every decision that isn’t made – when did that happen?”

Reviewing the earlier film of two Ukrainian planes going down, there are a couple of things worth noting:

2 — the reason for the first crash is utterly prosaic. The pilot simply turns too sharply at low speed, then tries to go nose up without applying enough throttle, all while only about 100’ off the deck. The Su-25 stalls, drops, and crashes. Trust me, I know this mistake personally, and I was only trying to dodge a tree, not incoming fire.

Nova Petrivtsi is a small suburb on the banks of the Dnieper River, only about 1 mile north of Kyiv proper. Most of the area is actually a park containing a 17th century monastery and the lavish home of former prime minister Viktor Yanukovych lived. That would be the pro-Russian PM whose campaign and even inaugural speech were prepared by Paul Manafort.

Yanukovych obtained the property in the middle of monastery grounds though a mixture of corruption, bribery, and outright authoritarian seizure. His home and it’s lavish furnishing is preserved as a museum in order to showcase the wealth that he stole from the Ukrainian people.

Outside the park, Nova Petrivtsi contains a number of very high end residential neighborhoods, nice restaurants, and hotels favored by visitors to Kyiv. Or … it did.

This has now been confirmed. It places Ukrainian forces much closer to the captured city of Kherson, and reverses the usual narrative about the possibility of Ukrainian forces becoming trapped. In this area, it’s Russian forces in danger of being cut off and surrounded by a Ukrainian offensive.

Reports that the Armed Forces of Ukraine have liberated the town of Posad-Pokrovske, along the M-14 highway between Kherson and Mykolaiv. If true, this cuts off Russian fascist forces along the Southern Buh River. pic.twitter.com/FDOI4yWcGP

Space was one of the few areas of technology where Russia has remained relevant in the post-Soviet era. But they’ve been running on momentum and decades old designs. They’ve offered reliability, but no innovation. Now that they’ve undercut that reliability, there’s no reason for anyone to pretend that Russia is still making significant contributions in space.

“While recognizing the impact on scientific exploration of space, ESA is fully aligned with the sanctions imposed on Russia by its Member States,” the agency wrote.