It was a cold and windy February day in South Carolina. Pundits doing live shots in the parking lot of the bar were wearing blankets over the lower third of their bodies, just out of frame. A Democratic presidential primary was going on, and if there was a general consensus, it was that Joe Biden’s campaign at least had to cloud a mirror held under its nose to account for what had been to that point a doomed and futile ride into forced retirement.

He’d stumbled badly in Iowa, fallen flat on his face in New Hampshire, and finished far up the track in second in Nevada. This was Biden’s third try at the presidential nomination, and he had yet to win a single primary in any of them. A former vice president to a still-popular two-term president, Biden needed to do something in South Carolina or he was headed for the remainder bin. Almost a year later, after a lot of fuss and bother (and one armed insurrection), Biden was sworn in as the forty-sixth president of these United States.

He’d crushed the field in South Carolina, in no small part due to the endorsement and political acumen of Representative James Clyburn, Democratic whip in the House of Representatives and a force in the state’s Black community. (Exit polls indicated that the majority of Democratic primary voters in South Carolina were Black.) Once Biden got rolling, there was no stopping him. Various temporary top rivals—Pete Buttigieg, Amy Klobuchar—dropped out and signed on. Biden won ten primaries on Super Tuesday and picked up more than six hundred delegates, which pretty much cleared out the rest of the field.

And although El Caudillo del Mar-a-Lago and his parade of brain-wormed sycophants continue to dominate headlines, Biden has doggedly persevered in his governance as he did in his campaign. The result is a tally of accomplishments as ambitious as they are historic.

Since taking the oath of office in January 2021, Biden has pulled American troops out of Afghanistan and signed both the Infrastructure Investment and Jobs Act and the Inflation Reduction Act, which together addressed the country’s screaming need for infrastructure improvement and made the most serious bid to confront the climate crisis ever attempted at the federal level. He got a gun law passed, and a law to relieve the suffering of veterans exposed to toxic burn pits in Iraq and elsewhere. He put his money where his mouth was in Ukraine. He put Justice Ketanji Brown Jackson on the Supreme Court; has had more federal judges confirmed, as of August, than any president to that point in his tenure since JFK; and has managed both the Covid pandemic and the aftermath of the Trump administration—twin plagues that fed off each other.

He’s done all this FDR-LBJ legerdemain with a razor-thin majority in the House and a de facto stalemate in the Senate. He’s done it in the teeth of a radicalized Republican party still in thrall to a nihilistic narcissist and its frenzied media ecosystem—and with an approval rating that, month to month, struggles to stay in the low 40s. This is, politically, nothing short of miraculous. A very big part of why is that Biden understands that he’s reached the Davy Crockett, “make sure you’re right and go ahead” portion of his political career.

It’s not that he’s evolved; it’s that he’s freed himself from the prison of his own ambition.

For decades, Biden was an ambitious senator with one eye always on the next step up the ladder. This contributed to his occasionally taking loathsome positions on issues like crime and abortion. It also likely played a role in the ungainly dive he took as chairman of the Senate Judiciary Committee when confronted by Anita Hill’s testimony against Clarence Thomas. Still, one always had glimpses of substance beneath the surface calculations. His authorship and stalwart defense of the Violence Against Women Act was among these. So was his successful push for a ten-year ban on assault weapons in 1994. In retrospect, these look very much like the seedbed for the Biden presidential administration but with one important difference: The political calculus changes when you have reached the summit. He has already pushed for a new assault-weapons ban. His decision to issue pardons for federal marijuana-possession convictions and open the door to its reclassification shows the president is engaging with policies that are pragmatic and popular, if not exactly centrist. To appreciate the scale of this transformation, consider that the Joe Biden of 1982 supported a constitutional amendment that would have allowed states to overturn Roe; now, in the wake of Dobbs, he is taking aggressive steps via executive order to safeguard reproductive rights. It’s not so much that he’s evolved per se; it’s that he’s freed himself from the prison of his own ambition.

In May 2022, the Department of the Interior released a groundbreaking report from the Federal Indian Boarding School Initiative, a program started in 2021 to dig out the truth behind the disgraceful system of education for Indigenous children that operated in the U. S. from 1819 into the 1970s, when they were shipped from their homes and had their language and culture ripped away. Some of them died and were buried in unmarked graves. The report is the kind of reckoning with the foul aspects of our national history that’s giving so many conservatives the vapors these days. The initiative was launched by Interior Secretary Deb Haaland, a member of the Pueblo of Laguna in New Mexico and the first Native American to serve as a Cabinet secretary.

The most conspicuous difference between the last two administrations is that the Biden administration has actually constructed a government, as opposed to the Trump administration, whose Cabinet members appeared to have been chosen either completely at random (Wilbur Ross?) or because they were diametrically opposed to the mission of the agency they were picked to lead. This latter tactic has been characteristic of Republican administrations going back to Reagan’s. But the unending mayhem within the Trump Cabinet was unique in recent history, a carnival of incompetence and backbiting that reached its lunatic conclusion in the days and weeks surrounding January 6, 2021, when the president threw the upper echelons of the executive branch into chaos in his attempt to overturn the election. By comparison, Biden’s Cabinet seems to consist of competent people, pulling generally on the same oar. Secretary of State Antony Blinken has been central to the president’s policies in Ukraine. Labor Secretary Marty Walsh, the first secretary of labor in years to have actually once run a union, has worked tirelessly to avoid a massive railroad strike. Besides her work on the boarding schools, Haaland has brought a new and unique perspective to Interior.

Perhaps the most significant relationship between the president and a Cabinet official has been that between Biden and Attorney General Merrick Garland. Biden’s Justice Department has imposed a moratorium on federal executions. Garland has reinvigorated the department’s Civil Rights Division, along with its Voting Section. The worst anyone with any credibility has to say about Garland is that he is overly judicious—not a bad thing for an attorney general to be after the final few months of the previous administration, when the president attempted to turn the DOJ against the very government of which it was a part. 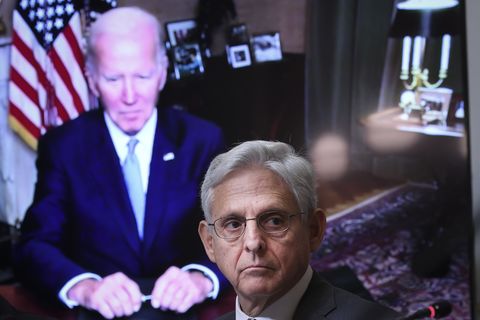 Biden has given Garland room to operate.

Like it or not, the shadow of Donald Trump’s crimes falls as heavy over the politics of this administration as the shadow of the pandemic falls over the national economy. A proper reckoning with both is as important to the country and to history as Secretary Haaland’s efforts to preserve the memory of the boarding schools are to the history of Indigenous peoples. Rightly or wrongly, the legacy of Biden’s presidency will be defined by what his administration does about the previous presidency.

However frustrated he may be by the pace of the proceedings, Biden has done an admirable job of giving Garland a free hand, staying out of the investigations into his predecessor’s assorted misdeeds. It is essential to his strategy of unwinding the chaotic politicization of the DOJ under Bill Barr. Without some sort of credible legal resolution to these matters, Biden will stand arraigned for having left unfulfilled his most significant campaign promise: to win what he called—rightly—the “battle for the soul of America.” This is not a battle that can end in a tie, nor one that can end in a half-a-loaf negotiated settlement. It’s a battle that must be won decisively, and in the full light of day. It’s a battle that gives life to everything else he’s trying to do.

Victory in this battle means more than all the shiny new bridges in the world.

Charles P Pierce is the author of four books, most recently Idiot America, and has been a working journalist since 1976. He lives near Boston and has his three children.

Olivia Cooke and Milly Alcock Have Been Submitted Under Best Supporting Actress Category …...

“Think of the Children” has become a dangerous dog whistle for...

Ruben Randall - April 27, 2022 0
TV/Movies
Post Views: 269 Courtesy of Pexels Out of most developed countries, Americans are often the most supportive of...

The Worst Thing That Happens To The Hogwarts Professors