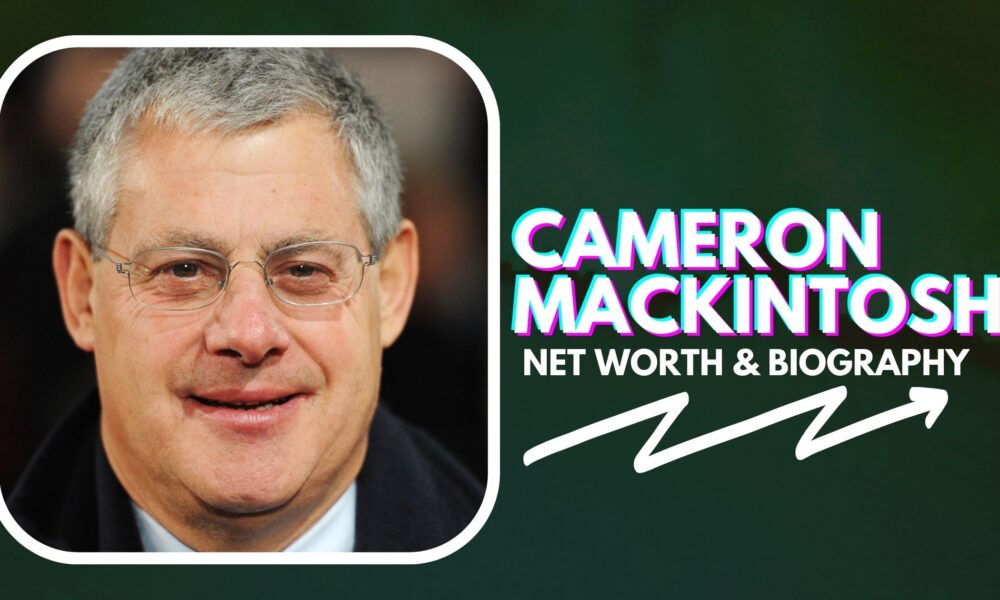 Sir Cameron Anthony Mackintosh is a British theatrical producer and theatre owner with an accumulated net worth of $1.1 billion, making him 0ne of the richest producers in the world. He is notable for his association with many successful musicals. In this article, RNN details Cameron Mackintosh’s net worth, biography, and career.

Cameron Mackintosh was born in Enfield, London on October 17, 1946. His parents are Diana Gladys, a native of Malta, and Ian Robert Mackintosh, a Scottish. Cameron Mackintosh was raised in his mother’s Roman Catholic faith and he attended Prior Park College in Bath. At the age of 8, his aunt took him to a matinee of the Julian Slade musical Salad Days, his experience there made him pick an interest in becoming a theatre producer.

Cameron Mackintosh started his theatrical career in his late teens as a stagehand at the Theatre Royal, Drury Lane, and later on became the assistant stage manager on some touring productions. In 1967, he worked with Robin Alexander and co-produced five plays at the Kenton Theatre, Henley. Then in the 1970s, he started producing his own small tours before finally becoming a London-based producer. His early London productions include Anything Goes In (1969), The Card (1973), Side By Side (1976), My Fair Lady (1978), and Tomfoolery (1980).
In 1981, Cameron Mackintosh produced Andrew Lloyd Webber’s Cats. It became a hit and one of the longest-running musicals on both sides of the Atlantic. After the success of the project, he approached the French writing team, Claude-Michel Schönberg, and Alain Boublil about bringing their musical Les Misérables to the London stage as it was then a successful French concept album. The musical opened in 1985 at the Barbican before transferring to the Palace Theatre. Les Misérables initially didn’t get enough attention but later became a hit, it became the longest-running musical and second longest-running London production.

In September 1989, Cameron Mackintosh produced Claude-Michel Schönberg and Alain Boublil’s next musical Miss Saigon, which opened at the Theatre Royal, Drury Lane in the West End. And he has relentlessly produced several other successful musicals such as Five Guys Named Moe, Oklahoma, My Fair Lady, Carousel, and so on. Also, he produced the 10th-anniversary concert of Les Misérables in London in 1995.

In 1990, he became a co-owner of the theatrical company, Music Theatre International. And in 1991, he founded the Delfont Mackintosh Theatres. Thomas Schumacher, Disney Theatrical Productions President in 2001, met with Cameron Mackintosh to discuss making Mary Poppins into a musical. The musical adaptation was a success and the job well done immediately fetched him other projects which were the 2004 West End and 2006 Broadway Productions at the Prince Edward Theatre and the New Amsterdam Theatre alongside Thomas Schumacher. He co-produced the London transfer of Avenue Q, which opened in the West End at the Noël Coward Theatre on 1 June 2006.

In 1998, Cameron Mackintosh celebrated thirty years in show business with a gala concert, Hey, Mr. Producer! featuring songs from shows he had produced throughout his career. The concert was performed on the 7th and 8th of June and the proceeds were sent to the Royal National Institute of Blind People and the Combined Theatrical Charities. The June 8 performance was graced by Queen Elizabeth, Prince Philip, Duke of Edinburgh, and several other celebrities.

Cameron Mackintosh produced a revival of Lionel Bart’s Oliver! at the Theatre Royal Drury Lane and it ran from 2008 to 2009. The publicity and attention were so intense and it aided the success of the production. By January 2009, the production was reported the fastest-selling show in West End history having made up to £15 million of pre-opening sales.

In 2013, he worked with the Chichester Festival Theatre on a revival of Barnum, it was performed in a giant tent ‘Theatre in the Park’ in July and August. On 27 January 2014, Cameron Mackintosh became the first British producer to be inducted into Broadway’s American Theater Hall of Fame. Later on, on May 3, 2014, he relaunched Miss Saigon at the Prince Edward Theatre in London, celebrating 25 years since its first launch. On December 6, 2017, Cameron Mackintosh began previews of Lin-Manuel Miranda’s Broadway hit musical Hamilton in London. It premiered on 21 December 2017 at the Victoria Palace Theatre.

As of 2022, Cameron Mackintosh has an estimated net worth of $1.1 billion, making him one of the richest producers in the world.

Cameron Mackintosh was the first theatrical producer to recognize that both touring productions and worldwide productions have highly lucrative market potential. He also had high-rated success in bringing in legitimate theatre directors and technicians to the field of musical theatre. The Delfont Mackintosh group owns eight London theatres, Prince Edward, the Prince of Wales, the Novello, the Sondheim, the Gielgud, the Wyndham’s, the Victoria Palace, and the Noël Coward.

In 1998, Cameron Mackintosh was named on a list of the biggest private financial donors to the Labour Party and he claimed to have had regrets based on his decisions. In the 2015 British general election, he donated £25,000 to the successful Conservative candidate for Somerton and Frome, David Warburton. And in 2016, Cameron Mackintosh voted for the UK to leave the EU in the EU Referendum.

Cameron Mackintosh is married to Australian-born theatre photographer, Michael Le Poer Trench whom he met on the opening night of a production of Oklahoma! in Adelaide, Australia in 1982.

During the 1996 New Year Honours for services to musical theatre, Cameron Mackintosh was knighted by Queen Elizabeth II. In 2005 & 2006, he was listed as No. 4 on The Independent on Sunday’s Pink List which is a list of the most influential “out-and-proud” gay people. Also in 2007, he topped The Stage 100 list, a list that recognizes the most influential members of the performing arts community annually. Cameron Mackintosh is a patron of The Food Chain which is a London-based HIV charity.

In 1994, he bought the Nevis Estate and has been involved in a long-time dispute with a tenant crofter over the use of the land on the estate. As the laird, Cameron Mackintosh wishes to use the land to build holiday homes but the crofter insists the land is useful and needed for grazing.

See also  So You're Ready to Buy Some Bitcoin. Which Method Should You Choose?

More Than 60 Plays and Musicals to Take In This Fall

Looking back at the memorable Steelers vs. Bengals Steel City contests

Ruben Randall - November 20, 2022 0
Celebrity
Do the Cincinnati Bengals and the Pittsburgh Steelers have a long and storied history? They do now. The rivalry dates back...

After Retiring From The NBA, Hakeem Olajuwon Launched An Incredibly Successful...