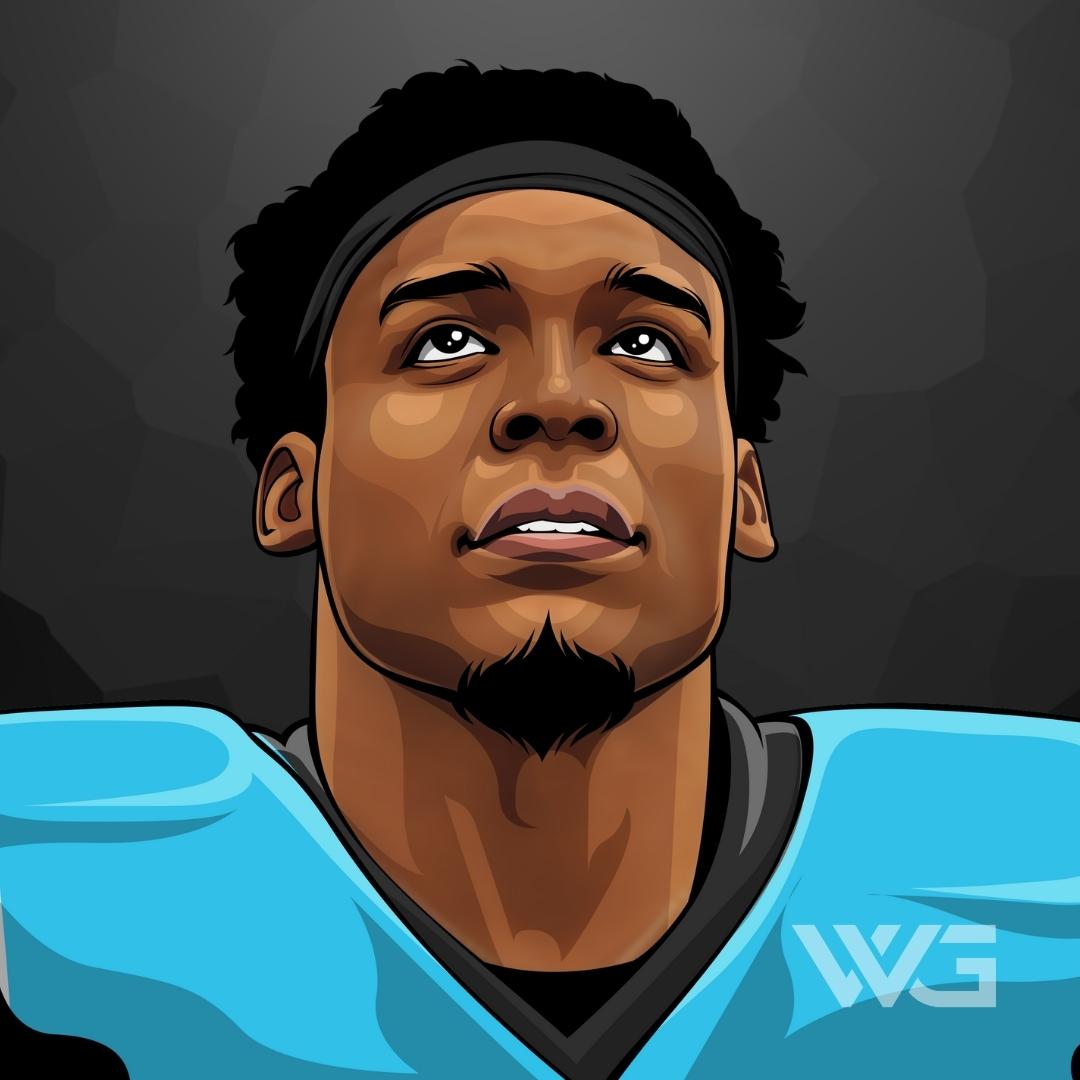 What is Cam Newton’s net worth?

Cam Newton is one of the most sought-after and talented quarterbacks in the NFL, and he has earned millions as a result.

Since he has shown no signs of retiring, we expect that his fortune will only continue to grow as he remains a force to be reckoned with on the field.

Cameron Jerrell Newton was born May 11th, 1989, in Atlanta, Georgia, to Jackie and Cecil Newton Sr.

Cam’s father was a safety for the Dallas Cowboys in 1983 and for the Buffalo Bills in 1984, while his older brother, Cicil Newton Jr., played center for the Jacksonville Jaguars.

While attending Westlake High School, Cam played for the football team, and as a junior player, he quickly earned a reputation for his skill.

Although Newton originally enrolled at the University of Florida, where he played for the Florida Gators football team in 2007, he transferred to Blinn College in Texas in 2009 to play for the head coach Brad Franchione.

However, his tenure there only lasted until 2010, when he signed with the Auburn Tigers at Auburn University, where he excelled on the field and graduated with a degree in sociology.

Cam Newton played his first game for the Carolina Panthers in 2011, and by 2012, his skills on the field earned him a place in the Pro Bowl.

By 2014, Newton had moved up to #24 on the Top 100 NFL Players list, and he earned a spot in the Pro Bowl again but ended up needing surgery on his ankle, which caused him to sit out for four months.

The next year was by far Newton’s most successful, and it saw him lead the Carolina Panthers to win the NFC Championship and enter the Super Bowl, with Cam being named the NFL MVP a day before the big game.

Despite being defeated in the Super Bowl by the Denver Broncos, Newton was named #1 on the Top 100 NFL Players list in 2016.

Following this success, Cam experienced a series of injuries, including a partially torn rotator cuff, a concussion, and another shoulder injury that caused him to undergo surgery in 2019.

Later in 2019, Newton suffered a Lisfranc fracture in his foot and was placed in reserve for the rest of the season before allowing him to pursue a trade the next year.

Cam signed with the New England Patriots three months after being released from the Panthers but left a lasting legacy with the numerous records he set.

As one of the richest NFL players in the world, Cam Newton has done very well for himself in terms of money.

Although we don’t have all of the details about his career earnings, we do know a bit about how much he’s made playing for the NFL.

While he may not have earned as much money as John Madden, Cam Newton’s net worth is certainly substantial, and it is still growing today.

Cam Newton has four children with his former girlfriend, Kia Proctor, and he also fathered a son with an Instagram model just months before his and Proctor’s fourth child was born.

Newton has previously described himself as a pescetarian, though he has since become vegan as of 2019.

Outside of football, Newton has created his own clothing line with Belk called MADE, which debuted in 2013.

He also opened a cigar bar and restaurant called Fellaship in Atlanta in 2019 and sometimes participates in motivational speaking, having started the Cam Newton Foundation to motivate youth by addressing their social, educational, and physical needs.

As such an accomplished quarterback, Cam Newton has earned many awards during his time in college and with the NFL.

While all of his accolades have been important, some have stood out more than others.

Here are some of the most significant awards Cam Newton has earned throughout his career:

All of the awards Newton has won have helped put him on the same level as other NFL greats, such as Payton Manning and Tom Brady, ensuring that his legacy in the sport will live on even after he’s retired.

How Does Cam Newton Spend His Money?

Cam Newton has more than enough money to buy anything he wants, and he has spent quite a bit on houses throughout his career.

The location of this condo is in an exclusive building known as The Trust, a residence where Michael Jordan also owns an entire floor.

During his time living in this condo, Cam lived a life of luxury in a home that took up half of the entire fifth floor of the building.

This open-concept condo is huge and spacious with a very modern style and floor-to-ceiling windows that offer incredible views.

Cam even had his own Rookie of the Year soda vending machine that decorated his foyer!

Although he hasn’t found a buyer for this condo yet, we’re eager to see if another big star decides to call this place home in the future.

Although Cam Newton has reached a lot of milestones throughout his career in college football and the NFL.

However, some of his highest points have stood out more than others for their impact on his career and legacy.

Here are some of the best highlights of Cam Newton’s career:

Having played for some of the richest NFL teams, Cam created a unique NFL legacy that stands out as one of the most impressive in sports history.

Cam Newton is an inspiration to anyone looking to pursue a career in football, but even those who aren’t can be inspired by his words.

During interviews, Cam has often spoken about how he keeps going, giving fans a great insight into his personality and character.

Here are our favorite quotes from Cam Newton:

There are many great things we can learn from Cam Newton, even if we’re not looking to break into the NFL.

Now that you know all about Cam Newton’s net worth, let’s take a closer look at the lessons he can teach us about reaching our own goals.

Here are some of the best success lessons to learn from Cam Newton:

It’s easy to make excuses for when something goes wrong or you fall short of your goals, but excuses can end up holding you back.

Once you make one excuse, it’s easy to keep making them until you fall behind and end up even further away from your goals than before.

2. Believe Anything Is Possible

If you can hold on to the belief that anything is possible, you’ll be in a much better place when it comes to chasing your goals.

While it’s easy to become jaded and make excuses as to why you can’t do something, if you replace that mindset and work hard, you can and will find success.

3. Take Pride In Yourself

Every achievement is significant, and it’s important to celebrate your victories, no matter how small they may seem.

If you take pride in what you have accomplished, you can keep yourself motivated to keep working towards your biggest goals.

Cam Newton is one of the most skilled quarterbacks in the NFL, and he’s made millions using his talents.

Fortunately, he is expected to keep playing for many more years, so we expect his fortune to continue increasing substantially with each new season.

Make sure to check back for updates as Newton continues in his career and grows his net worth.

What do you think about Cam Newton’s net worth? Leave a comment below.

Donald Trump No Longer in Contempt of Court in NY but AG Still Holds...

Ruben Randall - May 20, 2022 0
Money
Photo: PGA Tour Rory Mcllroy is an Irish Professional Golf player. Here, you will know his net worth, salary, age, height, wife and all the...