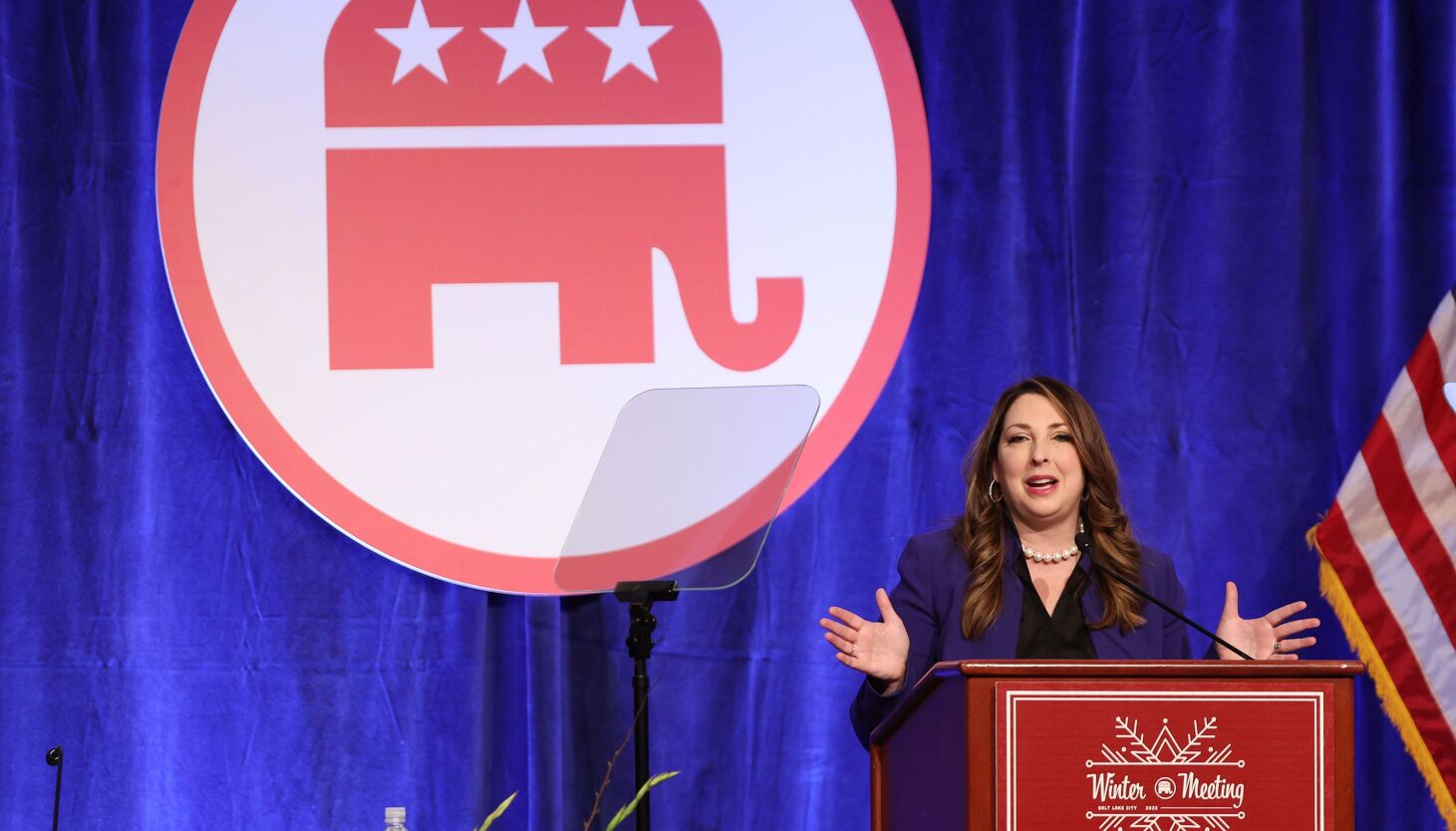 Ronna McDaniel looked and acted every bit like a party boss after winning her campaign in 2015 to chair the Michigan Republican Party. Smiling widely and glad-handing everyone within arms reach, she promised to turn the state red in the next year’s presidential election— a bold goal the GOP hadn’t accomplished in nearly 30 years.

But then it actually happened.

Surprising everyone, Donald Trump was catapulted into the White House and elected president — due in part to McDaniel’s work in Michigan. “Ronna has been extremely loyal to our movement and her efforts were critical to our tremendous victory in Michigan,” Trump said before announcing her as his choice to lead the Republican National Committee.

After being handpicked by Trump, McDaniel has served as party chair for six years, winning three two-year terms by landslides. If she is reelected this Friday for a fourth consecutive term, McDaniel — who is Brigham Young University-educated and a niece of Utah Sen. Mitt Romney — will become the longest serving Republican chair in history.

“Republicans are tired of losing,” Harmeet Dhillon, McDaniel’s chief challenger for RNC chair, said, while suggesting on multiple news outlets the losses were McDaniel’s fault. “The chair has had six years of leadership and in those six years we have successively lost the White House, the Senate and now barely performed in a promised red wave.”

Dhillon is a Republican lawyer and TV personality who represented the RNC and Trump during the House investigation into the Jan. 6, 2021, U.S. Capitol riot, in addition to other lawsuits. She wants the RNC to engage in more battles over election integrity, an area where she feels McDaniel has failed.

“Leading up to the 2020 election, the important work of election integrity challenges fell — either neglected or unaddressed by the RNC or campaigns, while the Democrats aggressively pressed their cause,” Dhillon wrote in an op-ed on Daily Wire last week. “This neglect and inaction was a failure with ominous consequences.”

Earlier this month, Dhillon claimed McDaniel supporters were engaging in a whisper campaign about her Sikh faith. In a statement, McDaniel, who is a member of the Church of Jesus Christ of Latter-day Saints, told Politico she wholeheartedly condemns religious bigotry.

“We are the party of faith, family and freedom, and these attacks have no place in our party or our politics,” McDaniel said. “As a member of a minority faith myself, I would never condone such attacks. I have vowed to run a positive campaign and will continue to do so.”

McDaniel and Dhillon did not respond to requests for interviews for this article.

BYU Political Science Professor Chris Karpowitz told the Deseret News the outsized attention the race is receiving could be a signal of a broader debate. “Often these elections occur with very little fanfare, but the apparent conflict is an indicator that there are differing views about what the future of the Republican Party ought to be,” he said.

Although McDaniel appears poised to win the election, even in Utah she hasn’t locked up all the votes.

Carson Jorgensen, chairman of the Utah Republican Party and a voting member of the RNC, told the Deseret News he hasn’t decided yet who he will support after meeting with McDaniel and Dhillon over Zoom. “Its a hard [decision] for me, because I want to get out there and sit down with them to feel them out on where they’re at and where they want to be,” he said.

Jorgensen said regardless of who wins the seat for chair he would like to see greater resources directed toward “election integrity in certain states to ensure they are following their voting procedures.”

McDaniel has juggled the complexities of party politics her whole life. A granddaughter of three-term Michigan Gov. George W. Romney, politics runs in her family. Her first campaign job was as a driver in Michigan for her mother’s failed U.S. Senate run in 1994.

After graduating from BYU, she worked for a political consulting firm in Washington D.C. where she met her husband. Soon after, they moved back to Michigan to raise their two children. While she was a stay-at-home mom she stayed active in local politics and in GOP circles across the state.

When her uncle, former Massachusetts Gov. Mitt Romney, launched his 2012 campaign for president she was all in. McDaniel served as the chair of the campaign’s Women for Mitt initiative and was heavily involved in other efforts.

“Ronna is about as high-energy and high-powered as they come,” Romney told the press in 2015 when asked about his niece. “Maybe she inherited her grandfather’s zeal for great causes. Like him, Ronna defies odds and breaks stereotypes.”

Although that campaign wasn’t successful, McDaniel remained involved in Michigan politics, serving in various party positions until deciding to run for state party chair in 2015. After winning that race, she immediately got to work building grassroots strategies to help Republicans win the state in the 2016 presidential election.

Surprising seasoned political pollsters, Trump won Michigan by a narrow margin of less than a quarter of one percent, giving him the electoral college votes necessary to secure victory. A month after the election, President-elect Trump asked McDaniel to swap her Michigan stomping grounds for a national party stage by becoming the new party chair.

Throughout the Trump Administration, McDaniel was a loyal partisan and cheerleader for the president, at times putting him above her own family members.

Days before taking office as Utah’s newly elected senator in 2019, Mitt Romney published an op-ed criticizing Trump’s character. Trump quickly shot back and McDaniel backed the president by speaking out against her uncle, saying Romney was “feed(ing) into what the Democrats and media want.”

POTUS is attacked and obstructed by the MSM media and Democrats 24/7. For an incoming Republican freshman senator to attack @realdonaldtrump as their first act feeds into what the Democrats and media want and is disappointing and unproductive. https://t.co/ArhI7Bi7bo

Noticeably, after taking the reins at the RNC, McDaniel stopped using the name “Romney” professionally. It was widely reported that Trump asked her to stop using her maiden name, and it wasn’t long before the official RNC website and her personal social media accounts reflected her decision to drop the name publicly.

After Trump’s failed 2020 reelection bid, McDaniel supported the GOP’s efforts to prove election fraud, urging patience to Republican faithful. “We have seen a lot of irregularities,” she told Fox News Anchor Bret Baier, suggesting the RNC would call for a recount in her home state of Michigan. “We’ve been pursuing reports coming in on our hotline, people who were disenfranchised from observing the vote count and some more serious allegations that we’re seeing.”

Ultimately, neither Trump’s campaign nor the RNC could prove evidence of widespread voter fraud, but McDaniel won reelection for RNC chair in January 2021 with Trump’s endorsement.

Over the last two years, McDaniel and the RNC have continued to support Trump, including by paying for some of his legal bills. “Defending President Trump and his record of achievement is critical to the GOP,” a RNC spokesman told the media. “It is entirely appropriate for the RNC to continue assisting in fighting back against the Democrats’ never ending witch hunt and attacks on him,” the spokesman added.

Will the GOP remain Trump’s party?

Several attacks on McDaniel leading up to the RNC convention, which convenes later this week, have focused on Republican losses in the past three elections. Republicans were expected to sweep the 2022 midterms, with McDaniel promising a “red wave.” But the wave didn’t materialize, leaving the GOP with only a thin majority in the House and short of a victory in the Senate. Not long after, Trump announced his 2024 presidential election, which led the RNC to stop paying his legal bills to avoid breaking party bylaws that prohibit in-kind campaign donations to candidates.

McDaniel has appeared to distance herself from Trump while still being careful not to sever the relationship. She has told the media she will remain neutral in the upcoming Republican presidential primary, and last week the Washington Post reported she told a private gathering of Republican National committee members that she is the only person who can keep Trump from starting a third party if he falls short of winning the 2024 GOP nomination for president.

Republican Party members are juggling a host of unknowns in the lead-up to 2024. Karpowitz said a debate about what Trump’s role will be in the party should be expected during the the race for party chair. “The chair is in an important position to ensure the nominee process will be run fairly, or if the process will advantage one presidential candidate over others,” he said.

Although Dhillon continues to roll out public endorsements from committee members and popular GOP politicians leading up to this week’s vote, McDaniel published a letter of endorsement from over 100 voting RNC members several months ago.

But whether support for McDaniel has held isn’t clear. A candidate must win support in a secret ballot from a majority of the 168 voting members of the RNC.

Regardless, a picture of the Republican Party’s future will be a touch clearer after a winner is chosen.