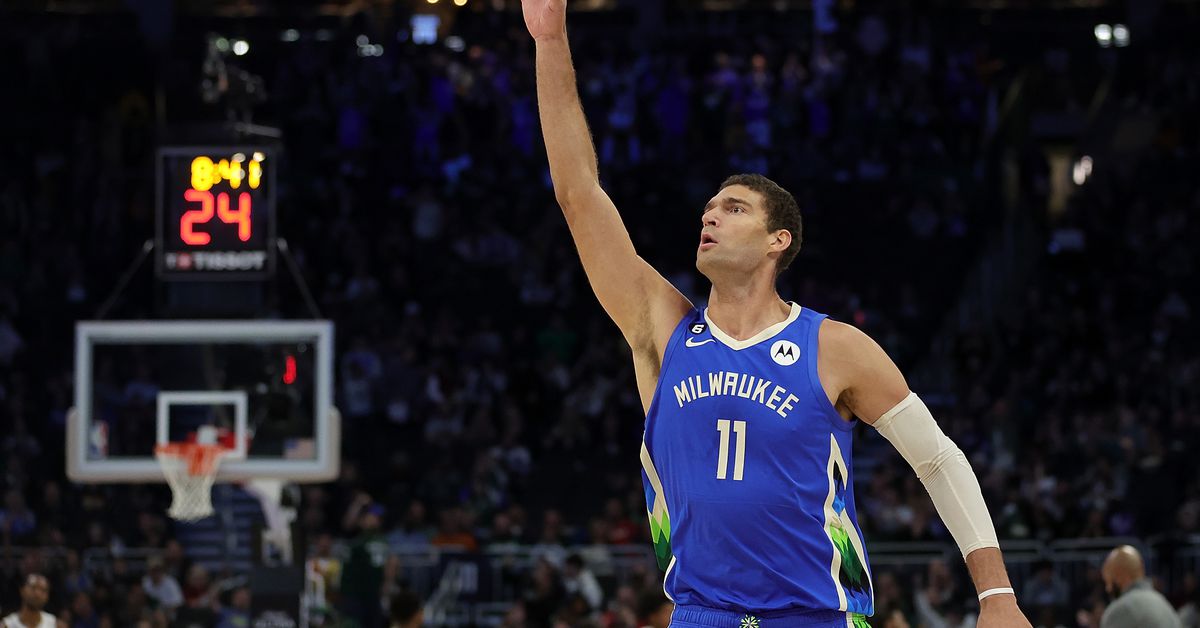 At least Milwaukee is back on the victor’s side of the ledger, though this week saw some uninspiring basketball from the key players who remain healthy. Unfortunately, with a cresting number of Bucks on the injury report—a figure likely to come down in the games ahead—some of the previous dilemmas remain. Bobby Portis still can’t buy a make. Grayson Allen hardly played due to illness and injury, meaning he couldn’t continue last week’s heater. As Jrue Holiday’s return to the floor beckons after practicing in recent days, the question of whether he can reassume a slightly-oversized scoring load has to wait. However, since Pat Connaughton’s first action of the season appears imminent, and Khris Middleton’s may have already occurred if not for the death of his father (our sincere condolences to the Middleton family), Holiday could ease into a less-demanding scoring burden in the weeks ahead. Until then, Jevon Carter is the lead guard, and perhaps he’ll have more to tap into once he cedes playing time after all these increased reps. There was one quandary that did receive an answer, but not a good one…

Giannis Antetokounmpo: B- (last week: A)

… and that comes from the top of the roster. Near triple-double and a clear preference to facilitate in the first half on Wednesday aside, this was not the week Milwaukee needed from Giannis. I wondered if he would seek revenge on Onyeka Okongwu and company by dismembering the Hawks’ interior, answering lingering questions about his knee pain along the way. While I don’t see him struggling physically or in pain, there’s no doubt the recent absences curbed any scant confidence in his jumper, which already looked in need of repair. This isn’t so surprising, but his struggles inside are. While I don’t think this is a sign of a long-term trend, and he’s seeing more bodies than usual on his way to the rack lately, Giannis should still consistently outwit Lamar Stevens. He benefitted from enough whistles (18 FTAs on Monday and 11 on Wednesday), but with Jarrett Allen missing, I expected more in the second half versus the Cavs. Mobley’s length was a problem to some degree, but the real issue currently is Giannis’ touch, both from floater range and in the restricted area.

Fortunately, Lopez picked up the offensive slack at almost every turn. Early and often this week, he was the primary scoring option in the halfcourt, capping it off by going toe-to-toe with Donovan Mitchell, ultimately coming out ahead (a sentence I never thought I’d type). Obviously, he’s the biggest revelation this year for the Bucks, but he’s an unheralded story nationally as a key reason they remain atop the standings. His scoring average is likely to come down from today’s 16.4, but if he somehow manages to keep this up, is he an All-Star?

After massive efforts last week, Carter stabilized as more of a complementary player in the scheme of the offense, while remaining its lead ballhandler. Essentially he’s in more of a traditional point guard role, especially after Giannis rejoined the team against Atlanta. While his scoring output naturally dropped, his playmaking upped to the tune of a 14-2 assist-to-turnover ratio. The long-term question remains if he can be that second-unit facilitator the Bucks need, but if this week is any indication, signs point to yes.

It has to be tough for Portis, seeing barely any of his looks drop through the net from outside 10 feet. After his long stint as a starter last year and continued double-doubles this year, his shooting feels less critical to Milwaukee’s success than it did in 2020–21. That means his minutes are safe, but it’s worth noting that Portis’ cold streak—or at least the absence of any hot streak—dates back to the previous league year: outside of this season’s third game, the last time he made more than two triples was Game 3 of the Bulls series in late April. Maybe Lopez can introduce him to Noah.

MarJon Beauchamp: B (last week: B+)

I’m starting to have mild optimism for Beauchamp’s prospects on this year’s roster. It’s likely the minutes will dry up and his offensive chances with it, but with the confidence from performances like Monday’s under his belt, he’s more likely to hit the few shots he’ll see come spring. His playing time will then mostly hinge on defensive matchups, and I wonder how he’ll do with smaller players. While the degree of difficulty on his looks was high, Donovan Mitchell cooked the rook often on Wednesday after Bud gave Beauchamp the assignment. Mitchell is certainly one of the league’s elite scorers right now, but given Beauchamp’s length, I hoped Mitchell wouldn’t find it quite as easy. At least he did it without getting whistled: after almost fouling out a second time in OKC last week, he had no more than two in more extended minutes these past three outings.

Following up a stinker with a mediocre-at-best night on Monday, Nwora salvaged his week with some outstanding work off the bench on Wednesday evening as the only reserve to break even (with apologies to Mamu, who only played 8 minutes) in 29 minutes. Entering that contest shooting an anemic 30.2% from both the field and downtown, he quite possibly bought himself some more playing time until two of Connaughton/Holiday/Middleton are back. When that time comes, Beauchamp probably takes what minutes remain on the wing, and rightfully so.

As Milwaukee battled back from an early and manageable second-quarter deficit on Wednesday, I thought Hill did a fine job running some very shaky-looking reserve units as they improbably evened the score. Though the production wasn’t evident otherwise, the mere fact that he attempted nine shots in San Antonio earns him a tip of the cap during a week where too many Bucks passed up open looks. I imagine his work in the months ahead will look similarly unspectacular, but I don’t think one can argue that he’s hurt the team this year much, if at all.

Though his plus-minus won’t attest to it, Ibaka quietly put up a great week in select action thanks to his jumper. I don’t think this is vintage Toronto- or OKC-era Ibaka, but his fingerprints were all over that second quarter against Cleveland when the bench staked Milwaukee back to equilibrium. He’s not taking minutes away from Portis, but these glimmers recently prove that a useful player still exists, despite fears entering the year that Ibaka’s playing days might already be over.

I imagine the Bucks’ training staff will be pretty careful with Matthews in the near term after he strained his hamstring on Monday. Maybe the reset will do him some good, as what little scoring he could provide completely vanished recently, leaving a strictly defensive player. Milwaukee doesn’t need much from him offensively, but even as a defensive specialist, he needs to make at least one bucket a week to see minutes when their full complement of wings is available. He’s someone else who Beauchamp could usurp in the weeks ahead.

This week saw the most action for Milwaukee’s two-way players, so I want to make note of their brief contributions here because there actually were some. Mamu managed to draw a whopping three fouls in under 90 seconds on Wednesday, and although he missed half the six ensuing free throws, snaps for Mamu for getting after it out there.

There was a sequence in the first on Wednesday—yes, A.J. Green did indeed receive first-quarter minutes versus a quality NBA opponent—where he corralled an offensive board, hit his first career NBA shot (a three), grabbed a defensive rebound, then barely missed another from deep. Again, snaps for Green. Side note: I can’t find anything online about what A.J. stands for. Could that be his actual first name? That’s what it appears like.

Mike Budenholzer: B (last week: A)

Somehow the franken-lineups Bud had no choice but to trot out on Wednesday got the Bucks back in it, so our man looks like some sort of mad scientist genius who has nothing left in his lab beyond half a roll of scotch tape and a few paper clips. How that calculus worked out facing a quality, if banged-up Cavs squad but not the plucky Spurs, I don’t know. Here’s hoping that Connaughton and Holiday are able to coexist alongside “key role players” Ibaka and Beauchamp. If the former two can’t integrate with this motley crew that kind of embarrassed Cleveland the other night, well… what future in the NBA do they have?

Though he’ll miss his good buddy James Harden and the added motivation that brings, maybe Giannis is salivating at taking Joel Embiid down a peg yet again tonight, and these days we are all surely craving a typical big Giannis night. That might not even be the week’s biggest development should Holiday and Connaughton get healthy, and the latter reestablishes himself in the rotation. The two other Bucks whose playing time shouldn’t wane but have reputations to maintain Lopez and Beauchamp. One is currently a featured scorer, the other merely a starter and budding contributor. Do both of those stick?

How would you grade the Bucks’ performance this past week?

What are your individual grades? Let me know in the comments below.

Ruben Randall - March 11, 2022 0
Money
THE seventh season of the Masked Singer is off to an extraordinary start, as Firefly choked mid-performance and McTerrier's mask fell off. Firefly's performance Wednesday...