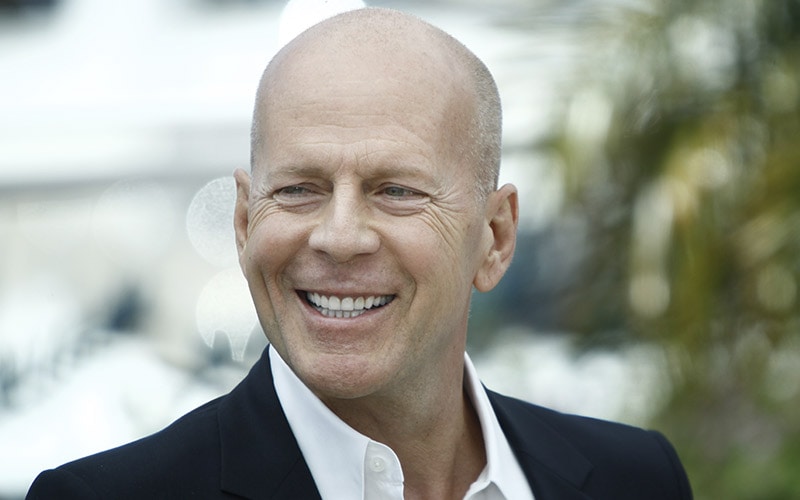 Bruce Willis is an American actor best known for his roles in Die Hard, Pulp Fiction, and The Sixth Sense. Having started his career in Hollywood in the early 1980s, Willis has over 145 acting credits to his name.

But it’s not just his work on the big and small screen that has contributed to his massive financial success. Bruce Willis’s net worth is also heavily impacted by his work as a musician and his production company. His Planet Hollywood endorsements and equity percentage ownership in Belvedere SA’s Sobieski Vodka help as well. Read on to discover Willis’s most profitable projects and follow his career from the early 1980s until the present day.

Bruce Willis was born on March 19, 1955, in Idar-Oberstein, West Germany. His father, David Willis, was serving in the American military at the time, and his mother, Marlene, was German. Willis is the eldest of four children. His siblings are Florence, David, and Robert (who has passed away).

In 1957, David Willis left the Army after being honorably discharged from service. The family relocated to Carney’s Point, New Jersey. Both parents worked for a living. Willis’ father found work as a mechanic, welder, and factory worker, whereas his mother worked in a bank.

Willis’s interest in drama and acting started in high school at Penns Grove High School. He furthered his studies in the arts by enrolling in the Drama Program at Montclair State University. And while he did not complete the course, it gave him a head start in the industry.

He moved to New York to pursue his acting career and waited tables and tended bars while auditioning for roles in between. His first break came in an off-Broadway play, Heaven & Earth. And not long after, he moved to Los Angeles to further his career as an actor.

After moving to Los Angeles, Bruce Willis starred in several minor roles in TV series such as Miami Vice and The Twilight Zone. But it wouldn’t be until the TV series Moonlighting landed at his doorstep that Willis’s fame would start to rise.

In Moonlighting, Bruce Willis won over audiences with his joyful nature and the chemistry between him and co-star Cybill Shepherd. And his work as David Addison Jr. would earn him a Golden Globe as well as an Emmy for Outstanding Lead in a Drama Series. He starred in 66 episodes of the series, which ran from 1985 until 1989.

Bruce Willis’s most known character is, without question, John McClane. The first movie, 1998’s Die Hard, was an instant classic and set the standard for action movies to come. With a budget of $28 million, the film earned $141 million globally.

See also  What You Never Knew About Tori Spelling

The movie also made Willis a household name and an international movie star. He would go on to star in four more Die Hard movies. Die Hard 2 was released in 1990, and the film performed even better than the original, grossing $240 million worldwide on its budget of $70 million.

The sequel’s success paved the way for the next film, 1995’s Die Hard with a Vengence. Samuel L. Jackson and Jeremy Irons also starred in the franchise’s third installment, which was even more successful than the previous film. The movie grossed $366 million worldwide against a budget of $90 million. And, as of 2022, it’s Willis’s fifth highest-grossing film.

Willis would take a break from the character for over a decade as he explored other projects. But he would return to the role of John McClane for 2007’s Live Free or Die Hard.

The fourth installment was another successful project for Willis. With a budget of $110 million, the movie made $388 worldwide. And, as of 2022, it’s Willis’s third highest-grossing film.

In 2013, the fifth and final installment premiered, A Good Day to Die Hard. With a budget of $92 million, the film was another success, earning $304 million globally.

Needless to say, the Die Hard films have significantly contributed to Bruce Willis’s net worth throughout his career.

1997 brought the sci-fi action adventure flick The Fifth Element. The movie, which also starred Gary Oldman, Milla Jovovich, and Chris Tucker, wasn’t a huge hit in the U.S. – only grossing $63 million in North America. However, the film grossed over $263 million globally.

1998’s Armageddon was another big contributor to Bruce Willis’s net worth. As of 2022, the movie, which co-stars Ben Affleck and Liv Tyler, is still Willis’s second-highest-grossing film. Making over $554 million globally on a budget of $140 million, the film was also the second most successful film of 1998. Titanic was the only film to beat it.

Bruce Willis’s highest-grossing film of his career is 1999’s The Sixth Sense. The M. Night Shyamalan-written-and-directed movie tells the story of a young boy who communicates with spirits. Willis plays a disheartened child psychologist Malcolm Crowe, who tries to help the boy.

With a budget of just $40 million, the film grossed over $672 million worldwide. It’s reported that Willis took a pay cut for the film. Instead of his usual $20 million rate at the time, he took a salary of $14 million plus a cut of the back-end profits. In total, it’s estimated that The Six Sense increased Bruce Willis’s net worth by $114 million.

Sin City and Sin City: A Dame to Kill For

After The Sixth Sense, Bruce Willis didn’t slow down. He appeared in several movies leading up to 2005’s Sin City. Frank Miller, Quentin Tarantino, and Robert Rodriguez came together to direct the film, which was based on the graphic novels by Frank Miller.

See also  Zac Efron Net Worth: Did He Get married?

Willis co-starred alongside Mickey Rourke, Clive Owen, and Jessica Alba in the film, which grossed $158 million globally against its $40 million budget.

The movie’s success was enough to greenlight a sequel, 2014’s Sin City A Dame to Kill For. However, with a budget of $65 million, the film only made $13 million domestically and topped out at just shy of $40 million worldwide.

In 2010, Willis starred in Red opposite Helen Mirren and Morgan Freeman. The movie tells the story of Frank Moses (played by Willis), who finds his peaceful life threatened by a high-tech assassin. Moses reassembles his old team in a last-ditch effort to survive and uncover the enemies.

With a budget of $58 million, the movie grossed $199 million worldwide, which was enough to greenlight the 2013 sequel Red 2. The film earned $148 million globally against an $84 million budget.

Willis has three rock albums to his credit, all of which have received positive reviews. He released three solo albums called “The Return of Bruno,” “If It Don’t Kill You, It Just Makes You Stronger,” and “Classic Bruce Willis: The Universal Masters Collection.”

His music made it onto the television series Miami Vice, which was also Willis’ television debut in 1984. He played the part of the gun runner, Tony Amato, in the episode No Exit and also sang the song “Respect Yourself” for the episode Lend Me an Ear.

Willis also started Cheyenne Enterprises, a movie production company, in 2000 with Arnold Rifkin. The company has produced a number of Willis’s films over the years.

Bruce Willis’s net worth is also affected by a number of business ventures outside of Hollywood as well. For example, he opened a nightclub called Mint in Haley, Idaho in the 90s. He ended up closing the property in the 2000s. But in 2018, he sold the property to local investors.

Willis also opened the Liberty Theater in the same town. He restored the theater to its former glory. However, the venue never turned a profit. And in 2016, Willis and his ex-wife Demi Moore donated the theater to the Sun Valley Center for the Arts.

Willis, Sylvester Stallone, and Arnold Schwarzenegger, the original Planet Hollywood promoters, received the payment through an employee stock ownership plan for their appearances and endorsements.

In exchange for 3.3% of the company, Willis agreed to represent Belvedere SA’s Sobieski Vodka globally in 2009.

Bruce Willis’s net worth has also been significantly impacted by his real estate investments over the years. He has owned homes in Penns Grove, New Jersey, and Los Angeles, and apartments in New York, Riverside South, Manhattan, and Trump Tower.

However, as of 2022, when Willis announced his health had started to decline, he has begun selling off a number of properties, $65 million worth.

Bruce Willis was married to actress Demi Moore from 1987 to 2000, when their divorce was finalized. Together, they have three daughters, Rumer, Tallulah, and Scout.

In recent years, Willis was diagnosed with aphasia, which affects a person’s cognitive abilities. While performing in Out of Death, the director requested that the screenplay be adjusted to help accommodate Willis.

On March 30, 2022, Willis announced his retirement at age 67. While he has a number of projects that are still to premiere, he will step away from the industry.

As of 2022, Bruce Willis’ net worth is estimated at $250 million. His net worth primarily comes from his acting over the last three decades, but it’s also impacted his business ventures, production company, and brand deals.

Willis has also completed work on Paradise City, where he stars opposite John Travolta. The movie releases on November 11, 2022. And lastly, there is Die Like Lovers, which was initially titled Soul Assassin. However, there is no release date for the film currently set.

Great Names That Were Ruined by Television Series

Ruben Randall - February 11, 2022 0
TV/Movies
If you have lived in  Buffalo long enough, you have experienced some amazing heartbreak. I'm talking about the kind of heartbreak you only have...