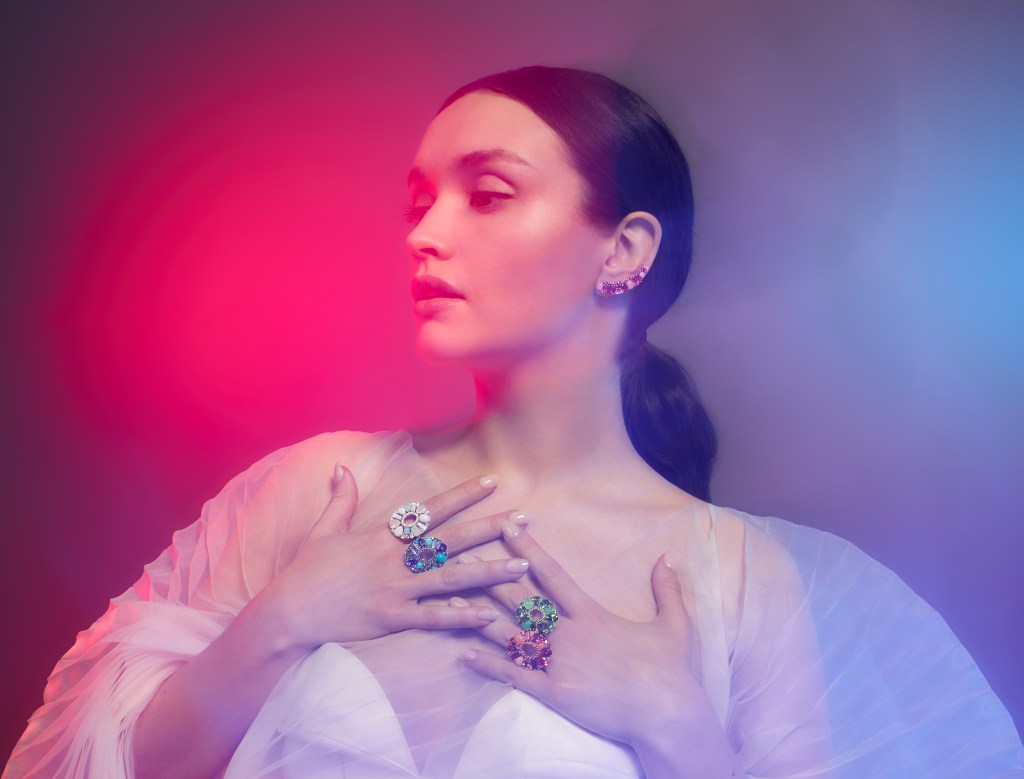 LONDON — Actress Olivia Cooke, the new face of Garrard, will make her debut for the British jeweler this week wearing pieces as bright and shiny as candy wrappers from the new Blaze collection.

Cooke — who played Becky Sharp in the ITV adaptation of the 19th-century novel “Vanity Fair,” and who’s appearing alongside Gary Oldman and Kristin Scott Thomas in the TV series “Slow Horses” — was photographed by Warren Du Preez and Nick Thornton Jones.

Cooke had her breakout moment at the 2015 Sundance Film Festival, where the offbeat teen comedy “Me and Earl and the Dying Girl” (in which she played said girl) was scooped up by Fox Searchlight just hours after its premiere and released later that year.

She has also appeared in the horror films “The Quiet Ones” and “Ouija” and the show “Bates Motel.”

Among the Garrard pieces she’s wearing are rose gold and pink sapphire ear climbers with rubellites and pink opals, and a white gold and opal cocktail ring with diamonds, agate and mother-of-pearl. She also sports eye-popping cocktail rings made with tanzanites, aquamarines, blue topaz and turquoise, or with green sapphires, tourmalines, tsavorites and chrysoprase.

The collection lands at Garrard on Albemarle Street in London on Thursday. Garrard, which became the first official Crown Jeweler in 1843, created Princess Diana’s engagement ring, which the Duchess of Cambridge wears today.

A pair of Garrard Blaze earrings with stones including blue sapphire, tanzanite, aquamarine, topaz and turquoise.
Image Courtesy of Garrard

Garrard is also marking the Queen’s Platinum Jubilee year by turning its store colors back to the original royal blue and unveiling a commemorative pin and pendant.

For both jewelry designs, Garrard’s creative director Sara Prentice took inspiration from the brand’s Sovereign motif. The design is inspired by the setting that Garrard created in 1910 to hold the Cullinan I diamond on the British sovereign’s sceptre.

Prentice created the pin in the shape of a peacock feather with a blue topaz at the center. Garrard said it can be worn as a lapel pin, a hair jewel or a hat accessory. Prentice’s pendant has blue enamel on one side, while the other side is covered in white diamonds. The pendant has a more spare, contemporary look and comes fixed on its own chain.

Elon Musk’s Politics Are About As Complicated As Trump’s