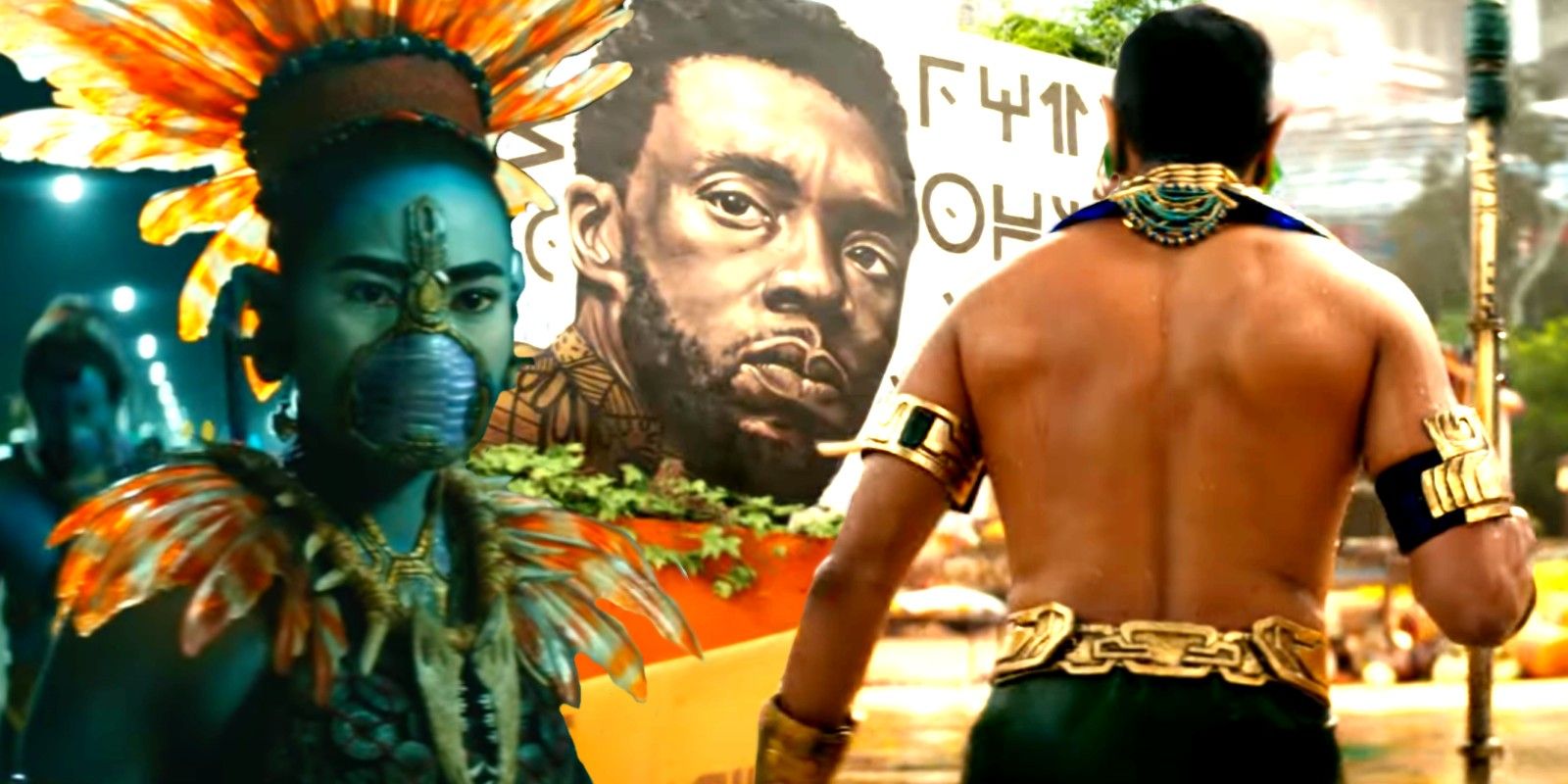 The first trailer for Black Panther: Wakanda Forever showcases the film’s emotion and introduces Namor the Sub-Mariner as a new power player in the MCU. Marvel Studios president Kevin Feige had always promised Marvel Studios would only go to San Diego Comic-Con if they could overdeliver, and the SDCC 2022 panel certainly fulfilled that promise. Feige made a raft of announcements that included the entire MCU Phase 5 slate, and the promise of Avengers: The Kang Dynasty and Avengers: Secret Wars.

That naturally means there will be a painful parallel between Black Panther: Wakanda Forever and the real world because the people of Wakanda will also be mourning the passing of a great man. Marvel understands the significance of this decision, and the first Black Panther 2 trailer focuses in on the grief sweeping through the fictional African nation – before ending with an optimistic hint of T’Challa’s successor. Here are the secrets and Easter eggs revealed in the Black Panther: Wakanda Forever trailer.

The Black Panther: Wakanda Forever trailer opens with scenes of grief as T’Challa’s loved ones mourn his passing. Marvel has yet to confirm the reason for King T’Challa’s death in the MCU, although there have been rumors he will have died of cancer, like Chadwick Boseman himself. Early shots in the Black Panther 2 trailer show Shuri, and later Ramona, mourning on a beach. Curiously, the architecture in the background is somewhat more evocative of South America than Africa, so these shots may not be based in Wakanda.

Ramonda Sits On The Throne Of Wakanda

The tragic death of T’Challa is even more difficult because Killmonger destroyed all stocks of the Heart-Shaped Herb, meaning the line of Black Panthers could potentially be at an end. After her son’s death, Ramonda takes the throne, becoming Queen of Wakanda. But the Black Panther 2 trailer makes it abundantly clear her heart is not in it; she is torn apart with grief. It’s possible Ramonda survived Thanos’ snap in Avengers: Infinity War, which would mean she’d already grieved for T’Challa once, only to have him return; his death would therefore be a particularly cruel twist of fate.

Black Panther 2 Introduces Namor – But Is He King Of Atlantis?

Namor the Sub-Mariner is a classic Marvel character, a sometimes-superhero who nonetheless has a fierce rivalry with Black Panther in the comics. Tenoch Huerta’s Namor is introduced in ceremonial garb that looks distinctly Mayan in appearance, perhaps suggesting Marvel has moved the Kingdom of Atlantis away from its traditional locations – in the Mid-Atlantic or Aegean – and placed it nearer to South America. Scientists have indeed found sunken cities in the Caribbean, perhaps as much as 4,500-8,000 years old, so this relocation could potentially be based in fact. Marvel has probably switched things up a little to avoid direct comparisons with DC’s Aquaman.

There have long been rumors the conflict between Wakanda and Atlantis is triggered by an undersea expedition that becomes a cause of conflict. These are apparently confirmed by the Black Panther 2 trailer, raising intriguing questions about why Wakanda is launching expeditions to the sea floor. Rumors have suggested the Wakandans are looking for vibranium, having detected evidence of an undersea deposit that – though they don’t know it – is situated close to Atlantis. If these reports are correct, it’s likely the Wakandans are hoping vibranium radiation has mutated some of the flora and fauna of the ocean, creating a substitute for the Heart-Shaped Herb.

The Throne Room Of Wakanda Is Ravaged By Fire & Water

One particularly shocking shot in the Black Panther 2 trailer shows the throne room of Wakanda being ravaged by both flames and floodwaters. The imagery is reminiscent of the destruction of the Heart-Shaped Herb stocks in Black Panther, symbolically suggesting the destruction of Wakanda. The title of the film may be “Wakanda Forever,” but this haunting shot suggests the nation will suffer a great deal.

Riri Williams’ Ironheart Teams Up With Shuri In Her Lab

Black Panther 2 will introduce Dominique Thorne as Riri Williams (codenamed Ironheart), a young genius who appears to be a good friend of Shuri’s. In the comics, Riri was a teenager at MIT who annoyed Tony Stark when she successfully reverse-engineered his Iron Man armor. Black Panther: Wakanda Forever serves as Ironheart’s MCU debut, along with her own Disney+ TV show spinning out of the film.

Black Panther 2 Features The Return Of M’Baku & The Jabari

Naturally, all the tribes of Wakanda are shaken by T’Challa’s death. That is even the case with the Jabari, whose leader M’Baku dared to challenge T’Challa in Black Panther. The trailer confirms M’Baku and the Jabari will prove to be potent defenders of Wakanda, waging war against invaders – and daring to take on enemies that are definitely out of their league. It will be interesting to see whether M’Baku still hopes to claim the throne of Wakanda for himself, potentially positioning him as another adversary to the Royal Family.

Related: M’Baku Can’t Become Black Panther No Matter How Much We Want Him To Be

The Forging Of The Ironheart In Black Panther 2

Marketing for Black Panther 2 has confirmed the film will see Ironheart create her first armor, which will be named due to the distinctive shape of her version of the Arc Reactor. The Black Panther: Wakanda Forever trailer deliberately parallels Ironheart with Iron Man, showing her forging the back-plate for the Arc Reactor. The shot is placed in surprising prominence, suggesting that Ironheart really does have a significant role in the film.

Wakanda Is Ravaged By Floods In Black Panther 2

The Black Panther: Wakanda Forever trailer builds to a dramatic climax with scenes of conflict, revealing the forces of Atlantis invade Wakanda – and flood the fictional African nation. The war between Wakanda and Atlantis is the stuff of legend in the comics, initiated by a similar event during 2012’s Avengers Vs. X-Men event when a Phoenix-powered Namor decided to drown Wakanda. The initial conflict wound down, but the hostility between T’Challa and Namor ran through to 2015’s Secret Wars. Marvel has confirmed that is the final film of Phase 6 – Phases 4-6 are collectively considered “The Multiverse Saga” – so the rivalry between Wakanda and Atlantis may not wrap up in Black Panther 2.

See also  The 10 Best Bromances On TV, According To Ranker

Finally, the Black Panther 2 trailer confirms there will indeed be a new Black Panther. This is expected to be Letitia Wright’s Shuri, although it’s difficult to say how she becomes the Black Panther; presumably, she either synthesizes the Heart-Shaped Herb or finds a substitute for it. Whatever the case may be, this new champion will provide hope for her people in Black Panther: Wakanda Forever.


Tom Bacon is one of Screen Rant’s staff writers, as well as a Peer Mentor for new writers and a member of the Care Team, offering support and a listening ear to members of the Comics group. A lifelong fan of major franchises including Star Wars, Doctor Who, and Marvel, Tom is delighted his childhood is back – and this time it’s cool. You can find him on Twitter @TomABacon.