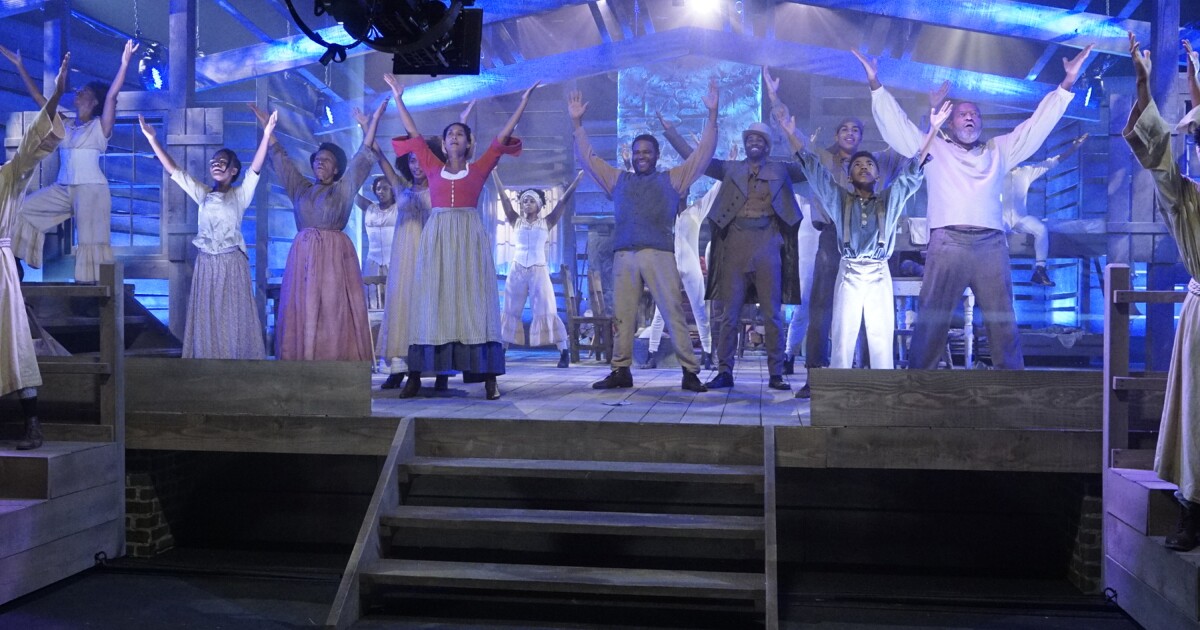 No sitcom amasses a 175-episode catalog without understanding the power of 22 perfectly sculpted minutes of television. But of its generation of network comedies, none carried off the very special episode with the bold, unapologetic conviction of “black-ish.”

ABC’s family sitcom, which concludes its eight-season run on Tuesday, has used the format to tackle the N-word, police violence, Black history, even — in an episode that was hidden for years before being made available on Hulu in 2020 — the presidency of Donald Trump. (My personal favorite is the extraordinary “Juneteenth,” a rollicking animated/musical episode that took cues from “Schoolhouse Rock” and “Hamilton” to explore the emancipation of enslaved people in the United States.) To pay tribute to the series’ mastery of the form, we asked “black-ish” cast members to tell us the episodes that were most meaningful to them. Here are their answers, ordered by number of mentions.

The entire series is streaming on Hulu and Disney+, so you have no excuse for not catching up.

It sets us up for the journey that we are about to embark on with Dre and the Johnson family, specifically dealing with the issue of race in the workplace and society as a whole and how this family deals with it — not only from three generations but also from a biracial perspective. Welcome to “black-ish.” —Anthony Anderson (Dre Johnson) 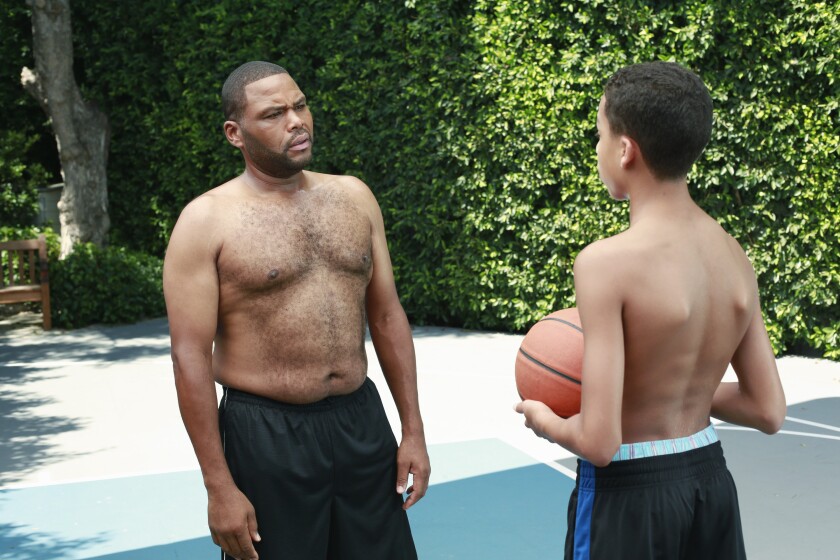 My first favorite episode of “black-ish” was “The Talk,” [in which Dre discusses sex with his eldest son, Junior]. It was the first episode where I felt in the groove and [believed], “I can do this.” It’s hilarious, has so many layers and important lessons and was one of my favorites to film. —Marcus Scribner (Andre Johnson Jr.) 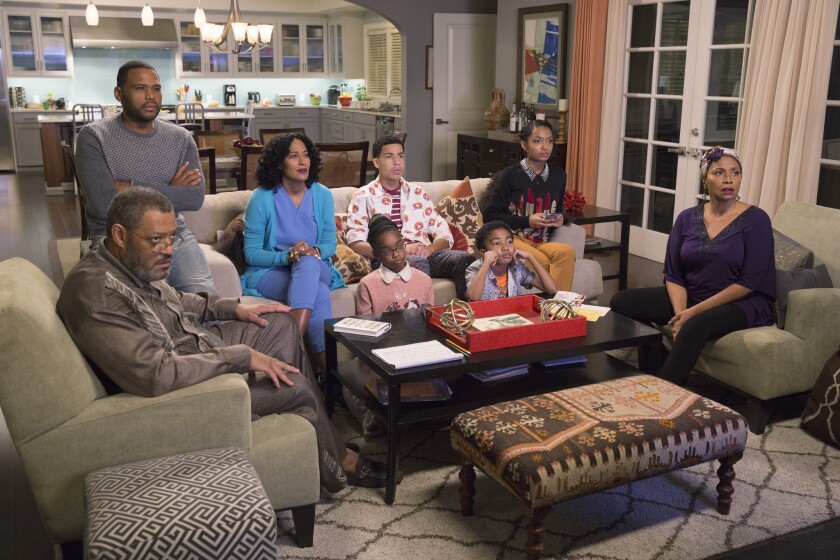 ABC will air “Hope,” as well as an additional important episode of “black-ish,” tonight.

“Hope” is an important “black-ish” episode to me because of how we showed the importance of accountability, peacefully protesting and standing up against police brutality. I learned how the power of my young voice mattered as well. —Miles Brown (Jack Johnson)

See also  These Shows Like ‘Jersey Shore’ Thrive on Partying, Fights, and Drama 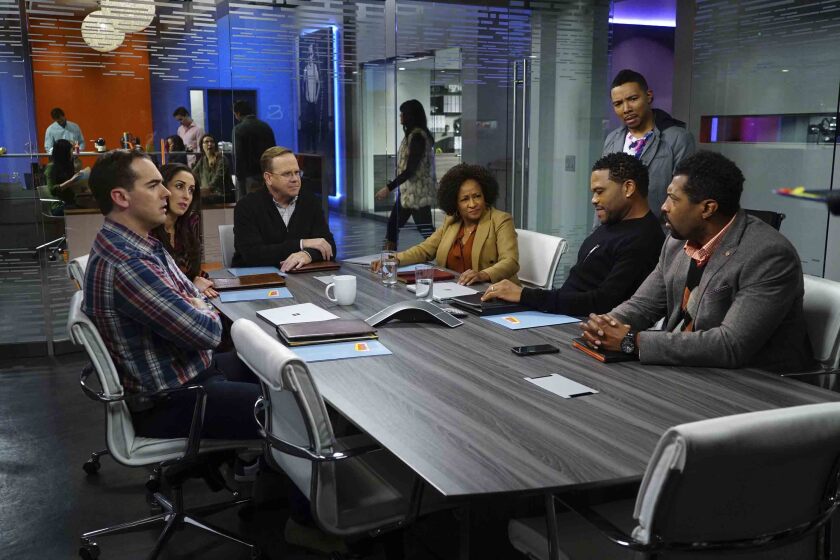 In “Lemons,” the nation is still reeling after the outcome of the 2016 presidential election, and tensions are particularly high at Dre’s office. They haven’t been able to get anything done since election night — eight weeks ago.

This episode resonates to me because it really clearly spoke to the power that a network television show could have because of its ability to be poignant and timely in its concept and production. We pivoted our storytelling in the wake of the [2016] election and wrote an episode that spoke to the disparate and weighted emotions that Americans were having at the time. I believe the whole process was done in less than two weeks. That couldn’t happen in any other medium. —Kenya Barris (series creator) 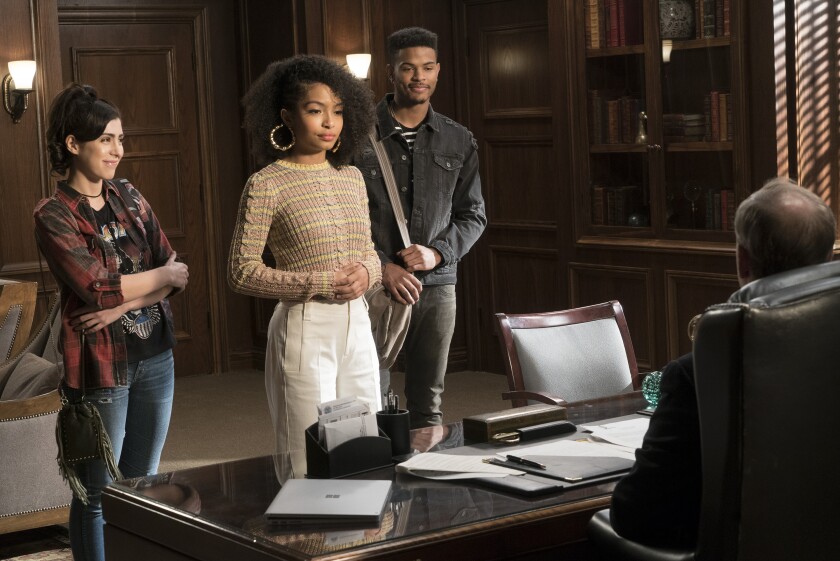 “Liberal Arts” was our backdoor pilot that led me to “grown-ish,” and before Kenya approached me with the idea of a spinoff, I had no clue we would ever follow Zoe’s journey into college. I thought she would fade into the background as the Johnson kid that comes back time and again to do laundry. I think it marked a moment in my character’s history where we get to see her outside of the spaces that we’re so familiar with, with her as an older sibling. She goes from being what I consider the grounded Johnson to suddenly being pushed into brand-new terrain and realizing how much her family protected her in many ways and the fact that she has to find her own way. —Yara Shahidi (Zoe Johnson) 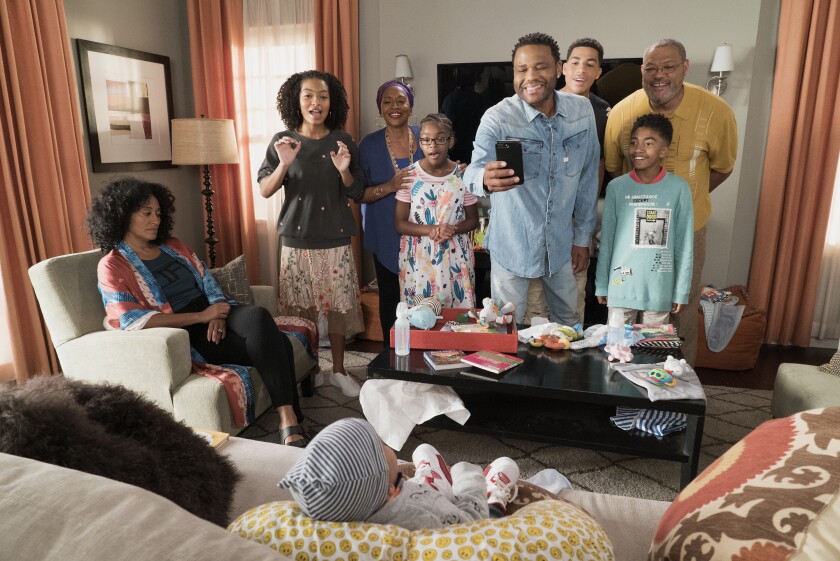 Bow (Tracee Ellis Ross, far left) deals with postpartum depression after the birth of her son DeVante in “Mother Nature.”

Many women in the Black community deal with postpartum mental health silently, either because they are misdiagnosed, not supported or fear losing their children if they ask for help. Hopefully this episode sparked some much-needed conversations and let Black women who are experiencing or have experienced postpartum depression know that they are not alone. Also, this episode was beautifully written and is another great example of our show being groundbreaking in our willingness to tackling heavier issues and shine light in areas that are often dark in the world of TV let alone comedies. —Tracee Ellis Ross (Rainbow Johnson) 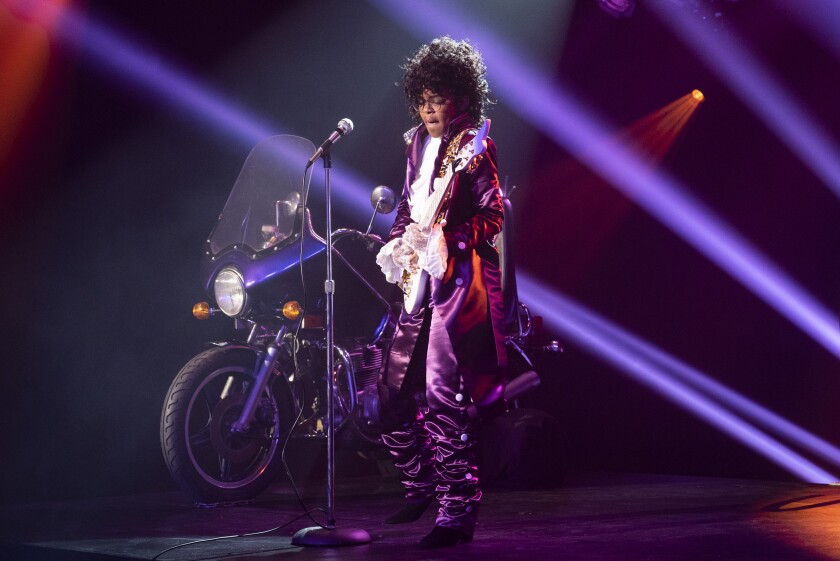 Our homage to Prince speaks to what our show does so well, in that we’re not only participating in this renaissance of Black culture, but we always tip our hat to the heritage, histories and cultures that have made shows like “black-ish” even possible. And I think Prince represents that in so many ways — his mastery of music, of course, but his commitment to activism as well. And we did it in such a fun way in which no detail was overlooked. Our cast is on our A game. Those costumes are custom made. The set detail, every single thing about it speaks to the amount of love that goes into our show and how much we care about how we tell these stories. —Yara Shahidi 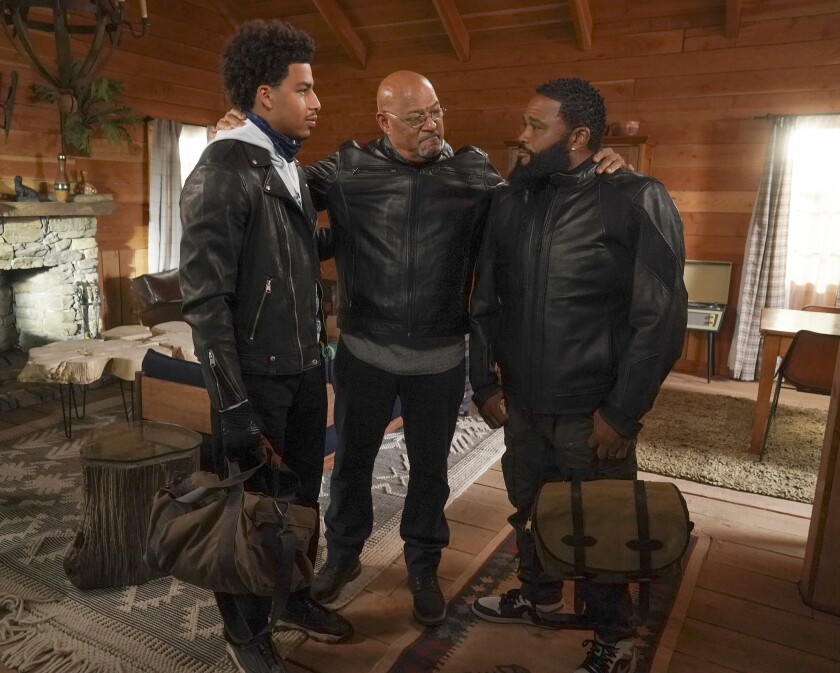 In “If a Black Man Cries in the Woods…” Pops, Dre and Junior go on a “man trip” to heal old wounds. Marcus Scribner, from left, Laurence Fishburne and Anthony Anderson pictured.

We have deep, meaningful conversations and tackle a lot of the built-up tension with our characters after years of conflict. It’s a beautiful episode that resonated deeply with me as a young Black man. —Marcus Scribner 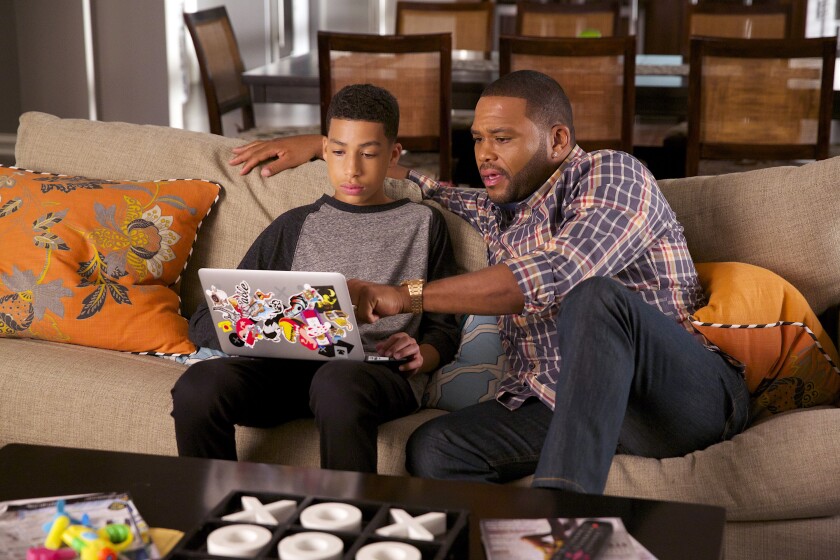 Marcus Scribner, left, and Anthony Anderson in “The Nod,” in which Dre sets out to expand Junior’s social circle to include more Black kids after he discovers Junior is clueless about the titular social signal between Black men.

This episode showcased “the nod,” a simple yet poignant and universal act exchanged between Black men. This act takes place in everyday life but really when these two or few men of color are the only ones in the crowd, especially in the workplace. It’s an unspoken yet universally understood gesture that lets the other person know that I acknowledge you and see you and then if some -ish goes down, I got your back! —Anthony Anderson

I think this was the first episode that gave a glimpse into exactly what “black-ish” as a show could amplify culturally in terms of specificity. It was the episode where I felt the “legs” of the show really begin to move. —Kenya Barris

“The Nod” was my first episode where Diane was a big part of the main plot. This was my first time where I got to really experiment with who my character was, which also felt like I was coming into my own as an actress. —Marsai Martin (Diane Johnson) 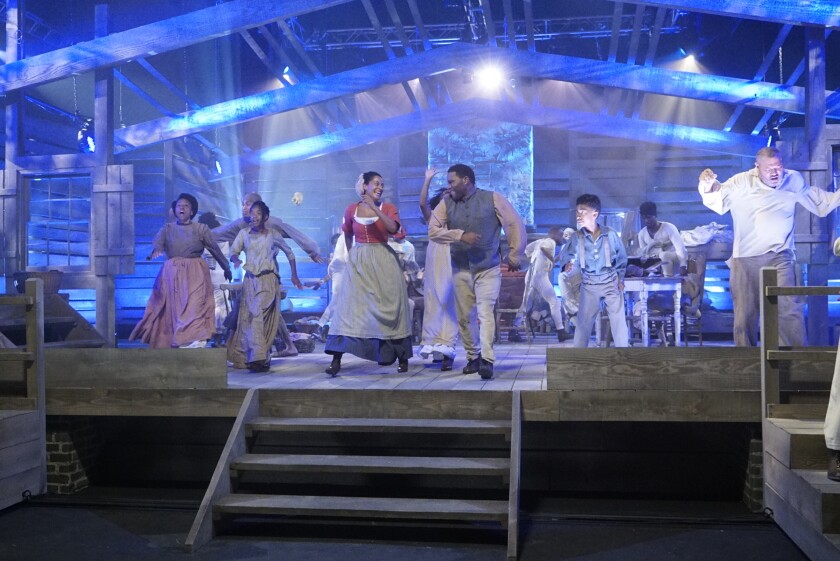 “black-ish” channeled “Hamilton” to tell the story of Juneteenth.

Many people say that this episode was the first they had ever heard of Juneteenth. What an honor to be a part of raising awareness about an important day in American history. And to be able to do it together as a cast and share other parts of our craft; we got to record the songs in the studio, learn choreography. It was a special episode to create together that allowed us all to play and trust each other and that showcased the incredible talent of our writers, crew, costume and hair and makeup departments. —Tracee Ellis Ross

It represents a detailed [exploration] of when and what it was like to really be free from slavery. On “black-ish,” we were able to tell the story in a relatable way to the point that we helped get it recognized in the Apple calendar. — Miles Brown

I learned so much about the holiday that week on set. —Marsai Martin

It was so damn necessary. — Jenifer Lewis (Ruby Johnson)

Rating: TV-PG-L (may be unsuitable for young children with an advisory for coarse language)

Surprise: Trump Doubles Down on Support of GOP Candidate Accused of...