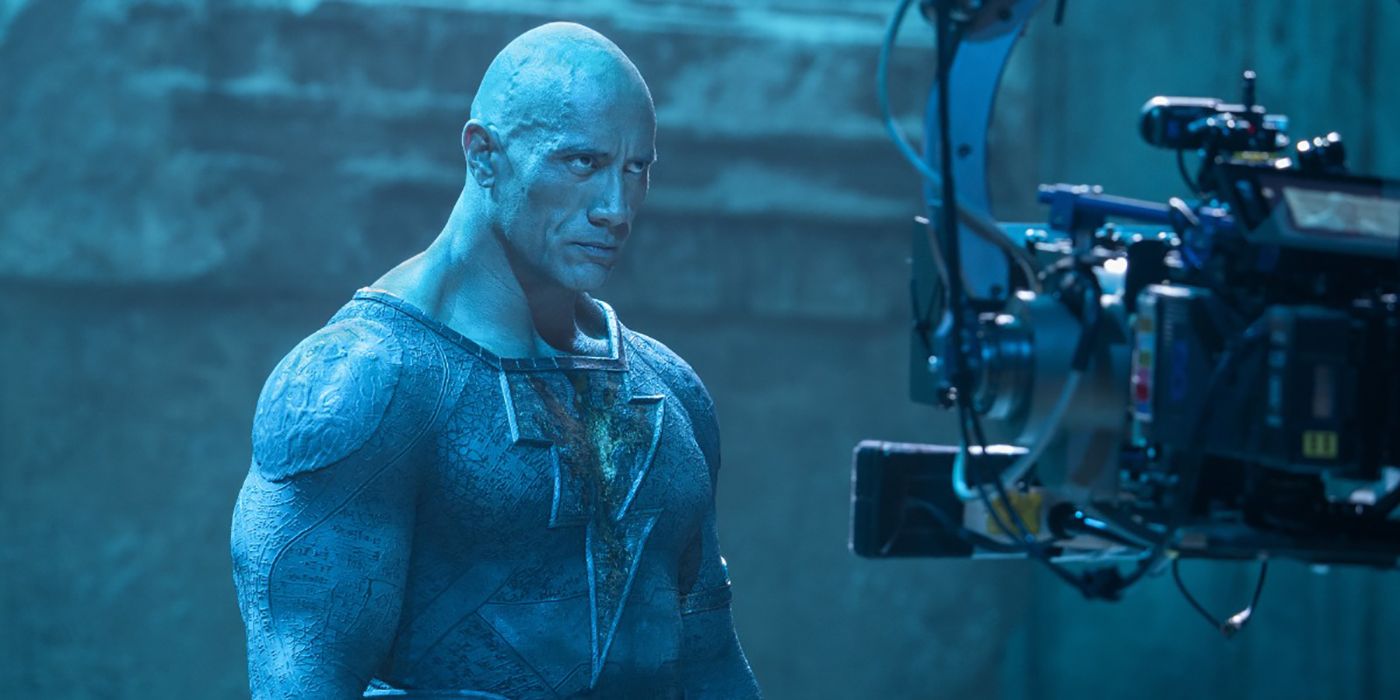 A Black Adam set video shared by Dwayne Johnson marks the official filming wrap on the DC Extended Universe movie slated for release this fall. For the former WWE wrestler turned movie star, his debut as Black Adam has been years in the making. The Rock was originally attached to star as the villain in 2019’s  Shazam!, though those plans were scrapped to give the character his own film. Black Adam was once planned for a December 2021 release date, but the timeline was severely delayed by the COVID-19 pandemic.

Johnson leads the Black Adam cast as the titular antihero alongside Noah Centineo as Atom Smasher, Aldis Hodge as Hawkman, Quintessa Swindell as Cyclone, and Pierce Brosnan as Doctor Fate, all members of the Justice Society of America. Johnson reunites with Jungle Cruise director Jaume Collet-Serra on Black Adam, which was written by Adam Sztykiel, Rory Haines, and Sohrab Noshirvani. Precise plot details for the film remain elusive, though it is expected to tell an origin story for Shazam’s archnemesis, a slave from Kahndaq who is granted powers by the ancient wizard Shazam and imprisoned for 5,000 years after abusing his abilities.

Related: Black Adam Is Fixing A Problem With The Rock’s Movie Formula

Now, a Black Adam set video shared by Dwayne Johnson marks the official filming wrap on the DCEU film. Shared on The Rock’s Twitter account, the video sees the actor in costume as he rolls up in a golf cart outside the studio and announces, “That’s an official wrap on Black Adam.” He continues, “As the Man in Black himself would say, ‘Toodle-oo, mothaf*cka,'” before hilariously driving off and being hit by a lightning strike effect that transitions into a Black Adam title card. Check out the original post and video below:

A parting message from The Man In Black himself, #BlackAdam⚡️

The finishing touches are complete.
That’s a wrap 🎬

The hierarchy of power in the DC Universe will change..

..and who says Black Adam doesn’t have a sense of humor 💀😈 pic.twitter.com/6w0rg2uAd4

Johnson shared a Black Adam set video last summer announcing the film had finished principal photography. However, nearly every superhero blockbuster or studio tentpole undergoes some type of reshoots or pick-ups to augment the footage already shot. The reason that additional photography on Black Adam took so long was reportedly because Guardians of the Galaxy Vol. 3 was occupying studio space at Trilith and the DC film had to wait for the Marvel movie to finish filming before beginning reshoots in early May.

Thanks to The Rock’s announcement, it can now be said with certainty that Black Adam is totally finished filming ahead of its release date on October 21. The other notable part of his post is the world premiere of the Black Adam trailer, which Johnson has been teasing on social media for the past few weeks. Now, the first full look at the next DCEU film on June 8 is just one day away. Stay tuned for any potentially surprising developments related to the upcoming Black Adam trailer.

Next: The Rock’s Black Adam Can Avoid A Major Snyder DCEU Criticism

See also  NBA: The Wizards need to move on from Davis Bertans

Pennywise: The Story of IT Trailer Explores BTS of Original Miniseries


Adam Bentz is a movie and TV news writer for Screen Rant. From a young age, Adam has been interested in a wide range of movies and television, but it was talented auteurs like Quentin Tarantino, Paul Thomas Anderson, and Aaron Sorkin who ultimately sparked his interest in the craft. Motivated by his love for the screen, Adam studied creative writing with a concentration in screenwriting at Southern New Hampshire University.

Ruben Randall - April 14, 2022 0
Money
Everyone nowadays is interested in learning more about Meagan Good’s relationship as well as her dating life. As a result, we’ll talk about who...

Ben Platt’s Pants Were At It Again