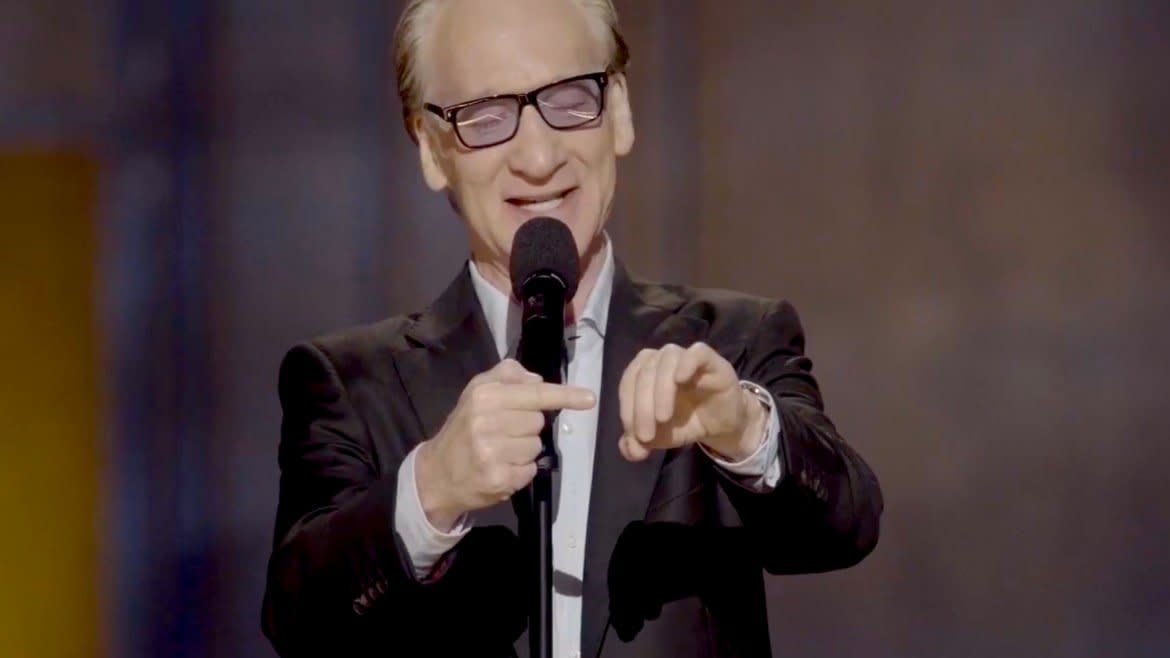 These days, a Bill Maher stand-up special more closely resembles a political pep rally. In lieu of setups and punchlines, audiences pay top dollar to be pummeled by a relentless combo of holier-than-thou takes.

He crows about correctly predicting that Trump would fail to concede if he lost the 2020 presidential election (something most leftists thought would happen). Rudy Giuliani is a vampire who sleeps in a coffin; Marjorie Taylor Greene a “Real Housewife of Karen County.” In case you hadn’t heard, Donald Trump appears to harbor disdain for his sweaty spawn Don Jr. Also, the right has “a lot of nerve” for thinking he’d ever move over to the Republican Party, even though the sour sexagenarian spends most of his time amplifying their culture-war diversions. Gen Z has apparently assembled Avengers: Endgame-style to “cancel Abraham Lincoln”—a crusade that exists almost entirely within the comic’s limited imagination. Oh, and in case you were wondering, he’ll still play R. Kelly whenever he wants because “the music didn’t rape anybody.”

Such “bold” opinions are on fully display in #Adulting, Maher’s new HBO comedy special out April 15. It’s his 12th stand-up special for the cable network that remains hopelessly in thrall to his brand of smug contrarianism and the crowd at Miami’s Fillmore Theater, where it was taped some months back, lap up his every word.

The title of the special, #Adulting, is in reference to young folks’ tendency to jokingly call the accomplishing of grown-up tasks “adulting.” This term—which again, was used in jest by twentysomethings—gained popularity around 2015/2016 and hasn’t been used in years, though Maher, who fancies himself something of an expert on millennial and Gen Z behavior, is unaware of this.

After mocking vaccinated crowd members for wearing masks—even though Maher himself suffered a breakthrough case of COVID and emerged sporting special corrective lenses—he took aim at the youths for wearing masks outdoors.

“I still see young people, alone, walking outside with a mask,” offers Maher. “I want to fucking punch them and breathe on them. You know what? You’re young, you’ve got the good immune system, it’s outside, play the odds a little bit you fucking pussies. No, really, we are raising a generation of Howie Mandels. We induced mass hysteria.” (Mandel suffers from crippling OCD.)

I’m not sure why the sight of young people wearing face coverings during a pandemic would incite such rage, but I am also not a self-absorbed talk-show host worth over $100 million.

If Maher is to be believed, there are few things worse in 2022 than being roundly criticized for a day or two on Twitter over perceived wrongdoings (at least for rich folks like himself). And no group is more guilty of this unspeakable act of barbarism than liberals.

There’s more, of course. A deeply unfunny and uninspired section on the perils of the #MeToo movement includes Maher dismissing the sexism and harassment allegations made by those on the Bernie Sanders campaign by saying, “Who raised these jellyfish? This cannot be the image women want or deserve. Yes, it’s great that we had a reckoning, but some stuff women…just handle yourself.”

This dismissive take isn’t all that surprising when you consider that one of Maher’s exes, Karrine Steffans, who is Black, once said of him, “Bill wants someone he can put down in an argument, tell you how ghetto you are, how big your butt is and that you’re an idiot. That’s why you never see him with a white girl or an intellectual.”

Maher proceeds to complain about the allegations of sexual misconduct made against Bill Clinton (who’s been accused of serial sexual harassment and rape); Al Franken, who was accused by a Democratic congressional aide of forcibly kissing her and saying “It’s my right as an entertainer,” along with multiple instances of groping; and Aziz Ansari, who was indeed the victim of some truly shoddy reporting. These are, according to Maher, examples of people who were unfairly canceled—even though Clinton is currently a bestselling author and statesman who charges six figures per speech, Franken is a podcast host who tours the country doing stand-up, and Ansari took a year off before getting paid millions by Netflix for a Spike Jonze-directed stand-up special wherein he riffed on the controversy (he is currently planning his feature directorial debut for Searchlight Pictures, which will see him star alongside Bill Murray and Seth Rogen).

Toward the end of #Adulting, Maher lambastes the state of modern-day liberalism and honors his own consistency.

“Liberalism is lifting up those who have been forgotten and forsaken. It’s not being petty, and scolding, and virtue-signaling,” he remarks. “Trust me, folks: I haven’t changed. I’m still the same pot-smoking, childless, unmarried libertine I always was. I have many flaws, but you cannot accuse me of maturing.”

So, who is Maher lifting up here?

Read more at The Daily Beast.

Get the Daily Beast’s biggest scoops and scandals delivered right to your inbox. Sign up now.

SIMMONS SAYS: McDavid’s amazing goal truly one of a kind

Seo In Guk To Return As A Singer For The First...

Ruben Randall - May 26, 2022 0
Actor
Singer and actor Seo In Guk will probably be returning as a singer after a protracted hiatus. According to officers, he will probably...