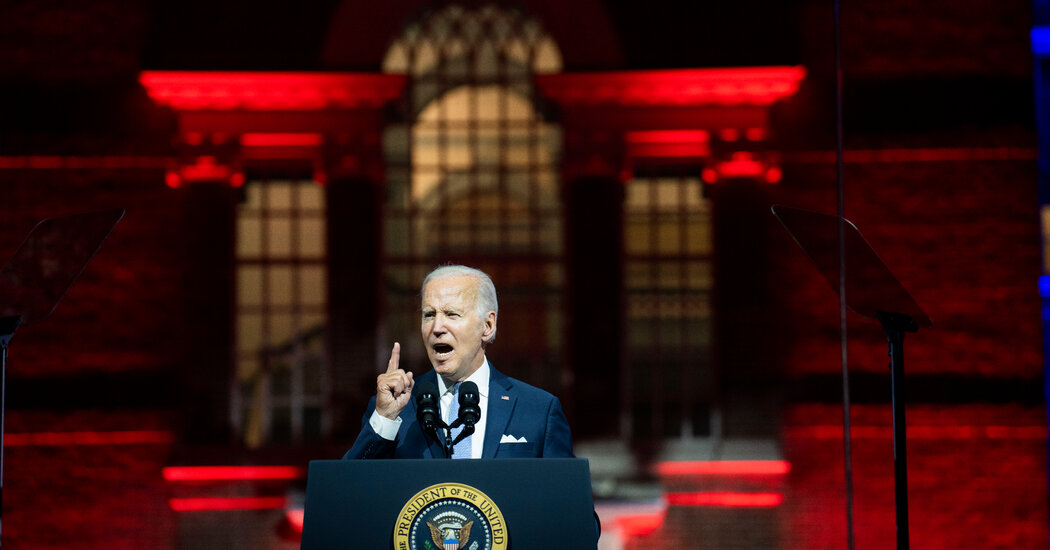 PHILADELPHIA — President Biden traveled to Independence Hall on Thursday to warn that America’s democratic values are under assault by forces of extremism loyal to former President Donald J. Trump, using a prime-time address to define the midterm elections as a “battle for the soul of this nation.”

In a 24-minute speech, Mr. Biden blamed his predecessor for stoking a movement filled with election deniers and people calling for political violence. He went out of his way to declare that not all Republicans embrace extremism, however, and he said that defending democracy will require rejecting Mr. Trump and his ideology in elections this fall.

“Donald Trump and the MAGA Republicans represent an extremism that threatens the very foundations of our Republic,” Mr. Biden said, flanked by Marine guards.

“But there’s no question that the Republican Party today is dominated, driven and intimidated by Donald Trump and the MAGA Republicans,” he added. “And that is a threat to this country.”

Speaking to several hundred spectators seated in front of Independence Hall in Philadelphia, where the country’s political institutions were born, and just steps from the Liberty Bell, Mr. Biden made it clear that he believes the political violence and election denial espoused by the former president and his allies have damaged America’s reputation abroad.

He cited the “extraordinary experiment of self-government” represented by the American Constitution and the Declaration of Independence, saying that “history tells us a blind loyalty to a single leader and a willingness to engage in political violence is fatal to democracy.”

The president was interrupted by protesters who chanted “Let’s go Brandon,” a reference to a crude epithet aimed at Mr. Biden that is popular among Mr. Trump’s supporters. At one point, the president joked that “good manners is nothing they ever suffered from,” but he also defended their right to protest, saying “they’re entitled to be outrageous.”

Before Mr. Biden delivered his remarks, Representative Kevin McCarthy of California, the top House Republican, said it was Democrats who were “dismantling Americans’ democracy before our very eyes.”

After the speech, Republicans said Mr. Biden was maligning the 74 million people who voted for Mr. Trump in the 2020 election.

“Joe Biden is the divider in chief and epitomizes the current state of the Democrat Party,” said Ronna McDaniel, the chairwoman of the Republican National Committee. “One of divisiveness, disgust and hostility towards half the country.”

The stakes are high for Mr. Biden and his political advisers, who believe they must cast the midterms as an existential choice for voters between Mr. Biden’s agenda and a return to the extremism of “MAGA Republicans” who have enabled Mr. Trump’s ideology. Mr. Biden plunged into the cultural issues that his party believes could help galvanize Democratic voters.

But the president, a practicing Catholic, avoided a direct mention of abortion rights, an issue he has struggled with for decades.

The president delivered what amounted to two back-to-back speeches in an address that was carried live by cable channels but not the broadcast networks.

In one, Mr. Biden painted a dark portrait of a democracy on the brink, threatened by violence and able to survive only if Americans “choose a different path.” In the other, he hailed his administration’s progress as evidence of a prosperous and free country, roaring to new heights where drugs are affordable, climate change is being confronted and the economy is growing rapidly.

The contrast was striking, but aides said Mr. Biden was determined to deliver both messages ahead of elections that will determine control of Congress, believing that only with a sense of optimism will Americans be willing to fight back against extremism.

The focus on threats to democracy is a return to an issue that Mr. Biden said drove him to run for the presidency, after white supremacists marched through Charlottesville, Va., in 2017. Since taking office, he has often said that the United States and its allies are engaged in a long-running struggle between “autocracy and democracy.”

The president had sought to avoid casting the conflict as a purely partisan one, aides said, and White House officials insisted that the address did not amount to a political event. But Mr. Biden directly called on Americans to go to the polls in November and reject Republican candidates who have signed on to the former president’s brand of politics.

Mr. Biden said Americans are not powerless to stop extremism and do not have to act like “bystanders in this ongoing attack on democracy” by failing to vote.

“For a long time, we’ve told ourselves that American democracy is guaranteed,” Mr. Biden said. “But it’s not. We have to defend it. Protect it. Stand up for it. Each and every one of us.”

In particular, Mr. Biden condemned what he sees as an increase in politically violent rhetoric such as the threats against federal agents in the wake of the F.B.I.’s search for classified documents at Mr. Trump’s Mar-a-Lago estate. Such threats, he said, threaten to undermine faith in the country’s law enforcement and have no place in normal political discourse.

In Thursday’s speech, Mr. Biden was specific about the threats inside America’s borders, saying that his political rivals have formed a party of extremism, threatening the democratic traditions debated and adopted at Independence Hall almost 250 years ago.

Mr. Biden has been planning the speech since early this summer, according to a Democratic official familiar with the president’s thinking. The official, who asked for anonymity to discuss private conversations with Mr. Biden, said the president has been concerned that the forces that animated the Jan. 6, 2021, attack on the Capitol are not fading away.

Recently, however, the president has grown more motivated to deliver it because of persistent false claims of election fraud as voters prepare to go to the polls in the midterms, a White House official said.

Mr. Biden’s combative message coincides with new polling that suggests his party’s fortunes — and his own popularity — have improved after several legislative accomplishments, a decline in gas prices and strong job growth that has given Democrats hope that they may retain control of Congress.

A poll published by The Wall Street Journal on Thursday found Democrats with a small lead over Republicans when voters were asked which party they preferred in their own districts. Five months ago, Republicans held a larger lead over Democrats in the same survey.

The poll also found some improvement in Mr. Biden’s approval rating, which rose to 45 percent from 42 percent in March. That could mean Mr. Biden is less of a drag on his party’s candidates than some Democratic strategists had feared in the spring.

Senator Mitch McConnell of Kentucky, the Republican leader, once vowed that “100 percent of my focus” would be on stopping Mr. Biden from making progress on his Democratic agenda. Recently, the Senate’s longtime tactician has found himself on the losing end of the legislative ledger.

Mr. McConnell has failed to block several of Mr. Biden’s high-profile bills, including a $1 trillion infrastructure package, a bill to improve competition with China, and a vast new investment in efforts to fight climate change and negotiate drug prices.

That has been in part because Mr. McConnell needs to protect incumbent Republican senators from a suburban backlash against the kinds of extreme positions in parts of the Republican Party that Mr. Biden has been raising more frequently in recent weeks.

The president and his allies still face a difficult task: retaining control of the House and the Senate at a time of high inflation and deep concerns among the majority of voters about the direction of the country under the leadership of Mr. Biden and Democrats in Congress. In The Journal’s survey, two-thirds of the registered voters who were polled said they believe the country’s economy is not good or poor.

But Mr. Biden’s political advisers believe the warnings about political extremism and Mr. Trump are an important part of motivating Democrats, independents and moderate Republicans to come to the polls.

The trip on Thursday was Mr. Biden’s second to Pennsylvania this week, and he is expected to make a third on Labor Day. Pennsylvania, a swing state, will hold crucial races for the House and Senate as well as a closely watched governor’s race.

During his first year in office, Mr. Biden promised to bring a sense of normalcy to the White House and largely ignored Mr. Trump. But the former president is once again at the fore, with continuing investigations into the Jan. 6 attack on the Capitol and an F.B.I. search last month of his residence in Florida for classified documents.

“I think finally the party and the people are waking up to see we have to hold these folks accountable,” said Quentin James, the president of Collective PAC, an organization dedicated to electing African-American officials.

“You may be paying a little more for your groceries, but the reality of what’s on the other side? It’s much more dire,” he said.

The speech comes at a moment of deep national divisions.

According to an NBC News poll released last month, nearly three-quarters of Americans believe the nation is heading in the wrong direction. The F.B.I. and the Department of Homeland Security have issued several warnings about how false claims regarding election fraud are motivating extremists attacks.

“We are in a crisis in this country. There’s no doubt about it. Not just in terms of the sanctity of the vote or trusting our votes will be counted,” said Allida Black, a historian at the University of Virginia who met privately with Mr. Biden last month to discuss the state of democracy. “We seem to attack rather than embrace responsibility and accountability.”

It is not the first time Mr. Biden has delivered a speech that is not about policies or campaigns but rather the morality of the country. He embarked on a “soul of the nation” bus tour during the presidential campaign and committed to unifying America during his inauguration.

On Thursday night, Mr. Biden summed up his criticism of Mr. Trump and his followers.

“You can’t love your country only when you win,” he said. “It’s fundamental.”

Tacos in Texas and God in NJ

My £4,000 nose job is the best cash I ever spent, writes KATHRYN KNIGHT

Meet the ‘vegan bros’ here to bust the myth that real...