For all their later successes, there’s still nothing in the Pixar catalogue that matches the dopamine hit of their very first feature. The first fully computer-animated film, its candy-coloured visuals simultaneously represented a new dawn and a vision of the future, in animation itself and in film-making more widely. Gone were the days of pen and ink, or the sense of something actually happening in front of the camera; the era of software-generated fantasy cinema was upon us.

Toy Story also arrived at the dawn of the kidult era, and played a large part in defining its style: a mournful nostalgia for a boomer childhood wrapped up in frenetic, kid-friendly camerawork. As Pixar’s films may have got more conceptually and thematically elaborate – your Inside Outs, your Wall-Es, your Souls – they have certainly probed depths that no mainstream American animated film did before. But it’s the cheerful human-scale drama of Toy Story that stays with me, and one I’d happily watch again and again. Andrew Pulver 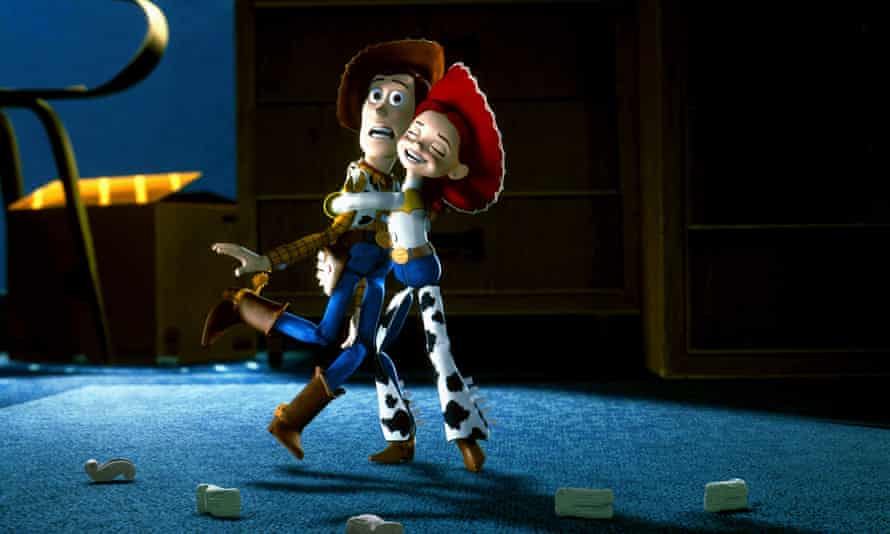 Though it was universally hailed upon its 1999 release, Toy Story 2 seems to have gotten lost in both the volume of great Pixar movies and the consistency of the Toy Story series. The original gets credit for firsties, while the end of Toy Story 3 inspired a flood of millennial weeping. But for sheer feel-great entertainment, I’ve always preferred the second entry.

Its rescue-mission plot, with Buzz Lightyear (Tim Allen) leading a group of fellow toys on a mission to help Woody (Tom Hanks), who contemplates a possible life after Andy, is endlessly inventive, maximizing the comic thrill out of simple ideas like “the toys visit a toy store” and “the toys drive a car”. On top of its enviable joke hit rate and set pieces, Jessie the Cowgirl’s lament (accompanied by the heartbreaking song When She Loved Me) covers some Toy Story 3 emotional ground with Up-like concision. In some later Pixar movies, the machinery behind the laughter and tears gets noisier and more obvious. Toy Story 2 gives the company’s engineering a flawless, fittingly plastic gleam. Jesse Hassenger 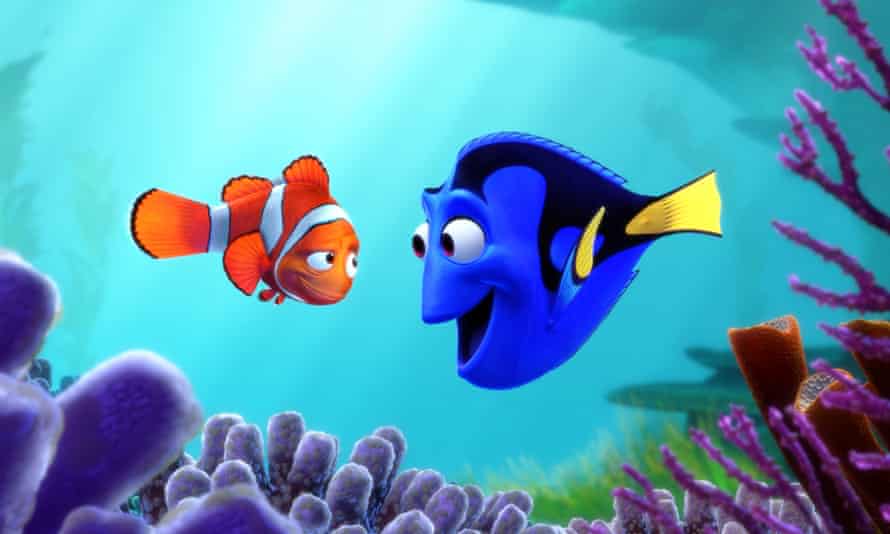 Before he started toying with Kubrick references and alienated Antonioni-esque perspectives in Wall-E, director Andrew Stanton got me in my feelings with a shot in Finding Nemo that flexes his old-school sense of framing. The shot arrives at the midway point during the joyous, comical and thrilling adventure, about a daddy clown fish (Albert Brooks) on a desperate intercontinental search for his stolen child. The eponymous clownfish sees his reflection across the Sydney skyline in the same way that a young Vito Corleone saw himself alongside the Statue of Liberty in The Godfather Part II. And then a gently moving pan reveals the layers of glass between freedom and Nemo’s captivity in a dentist’s fish tank.

I’m not saying Finding Nemo is The Godfather Part II of animation. But I’m not not saying it.

The 2003 movie felt like Pixar’s coming-of-age, the point when the young studio behind Toy Story and A Bug’s Life took their computer animation to new depths while hewing closer to classic Disney storytelling. Finding Nemo has the talking wildlife, the death of a parent trope and sincere emotional weight buoyed with fun, laughter and wonder. Meanwhile, it challenged Pixar animators to be meticulous with the ways light moves, reflects and gets lost in water, which made way for a visual grace that was breathtakingly new. Radheyan Simonpillai 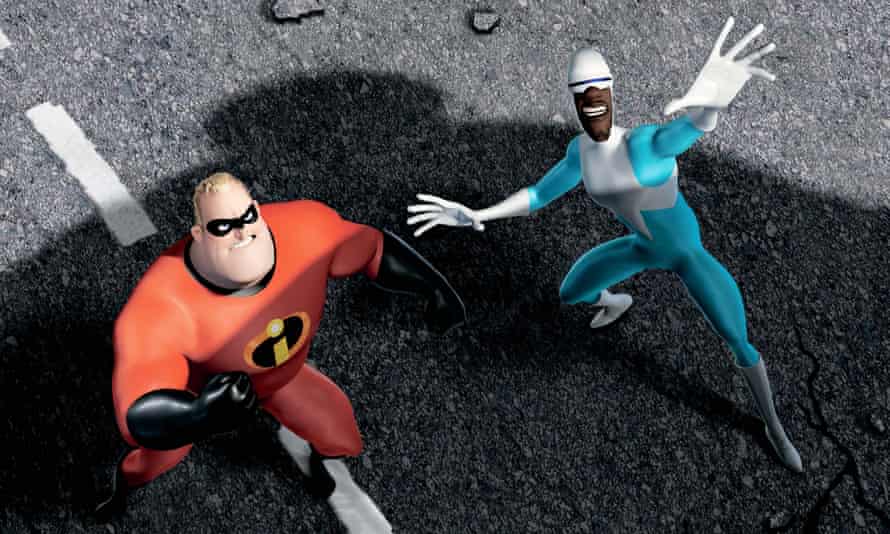 Pixar’s sixth feature was also their first about human beings, though the Parrs are anything but ordinary. All of the studio’s output up to that point had engaged with mature emotional experiences – friendships being tested, separation of parent from child – but writer-director Brad Bird ventured into unprecedentedly existential territory via the Parr family, keeping their crises light with mid-century whiz-bang superheroics.

A brute-force dad, a flexible mom stretched thin, a shy daughter who can disappear into thin air, and an inexhaustible ball of energy for a son face down the drudgeries of middle age and the tribulations of puberty, any navel-gazing leavened by a tightly paced battle between complicated goods and evils. (Not to mention a genuine, sympathetic villain, a fan-favorite vocal performance from Samuel L Jackson, and Michael Giacchino’s most hummable scoring work to date.) The rare original capes-and-tights picture to capture the exuberance of the comic book medium, it’s nonetheless shot through with grownup anxieties scarier than any villain. Charles Bramesco 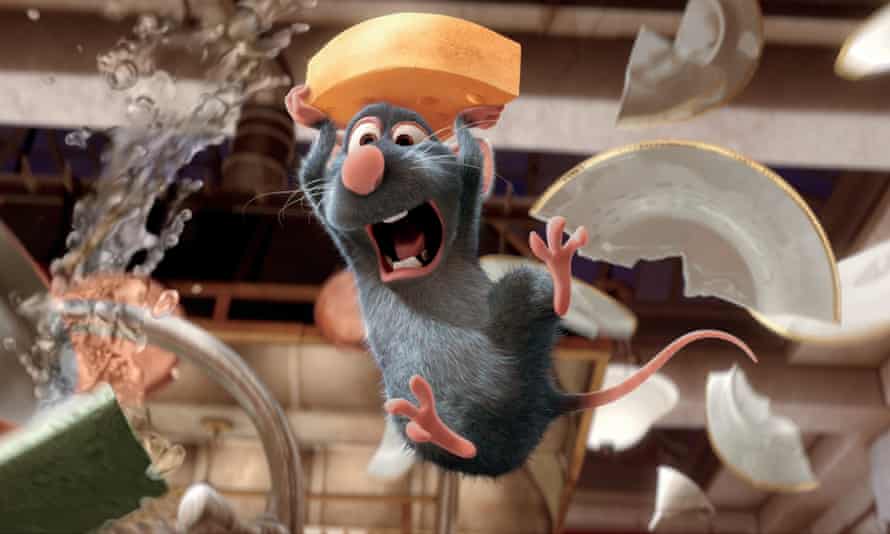 A niggling complaint with Pixar’s output, and one that seems to be getting progressively more pronounced with time, is an inability to find a story that’s quite as ingenious as the original concept, the out-of-nowhere brilliance of the set-up too often let down by pedestrian plotting, an elevator pitch quickly toppling down the stairs.

But never has idea been complemented by ideation quite so perfectly as in 2007’s Ratatouille, the very best kind of Pixar film that leaves you slack-jawed at just how brilliantly it all hangs together. A rat who dreams of culinary greatness helping a gangly kitchen assistant to wow the snobbish foodie elite of Paris, it’s an underdog story told with genuine love; for food, friendship and the inescapable pull of creativity. It felt like the studio at their purest and least calculated – the heartstring-pulling gentle, the slapstick restrained, the sequel opportunities scarce – and the film, as a whole, seemed less invested in luring the youngest of viewers (at a packed Hammersmith cinema on opening weekend, I vividly remember a screaming set of kids bored to tears by the “here’s what a sous chef does” of it all). It tracks that it was then one of their lowest performers at the box office and perhaps led to more safe, cut-and-paste franchise offerings in years to come, but there’s still nothing quite as satisfying as watching a rat pull a man’s hair to make the perfect meal, a three-course feast that leaves no room for seconds. Benjamin Lee

See also  Vivek Oberoi says powerful Bollywood people sabotaged his career: ‘I sat at home after delivering hits, nobody came to me with films’ 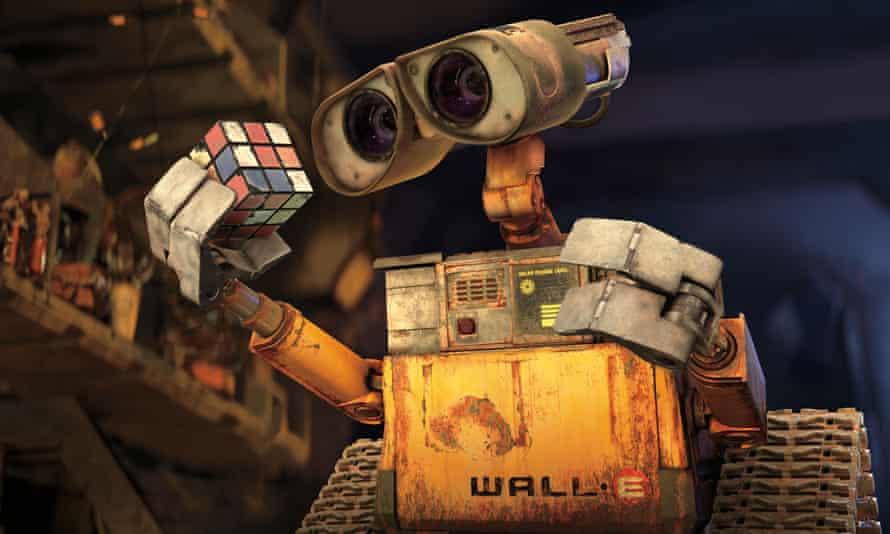 After an almost unrivaled run of commercial and critical smashes, Pixar took the biggest swing of its creative heyday: a dystopian comedy about a sentient trash compactor cleaning up the ruined remains of an abandoned Earth.

The opening half hour remains a nearly wordless masterclass in pure visual storytelling, but the film is no less bold after it blasts off into the cosmos, shifting into a madcap cruise-ship romp with shades of the great Jacques Tati and a vision of materialistic creature comfort as satirical as it is ironic coming from Disney. Bridging these tonally distinct passages is Wall-E himself, a lovably Chaplin-esque creation who doubles as a mechanical archeologist of lost humanity, cobbling together a soul from the discarded proof of our own. Today, the film looks like a sad premonition of our junkyard future and screen-addicted present – and a relic of a past when Pixar was still pushing the artistic limits of all-ages entertainment. AA Dowd 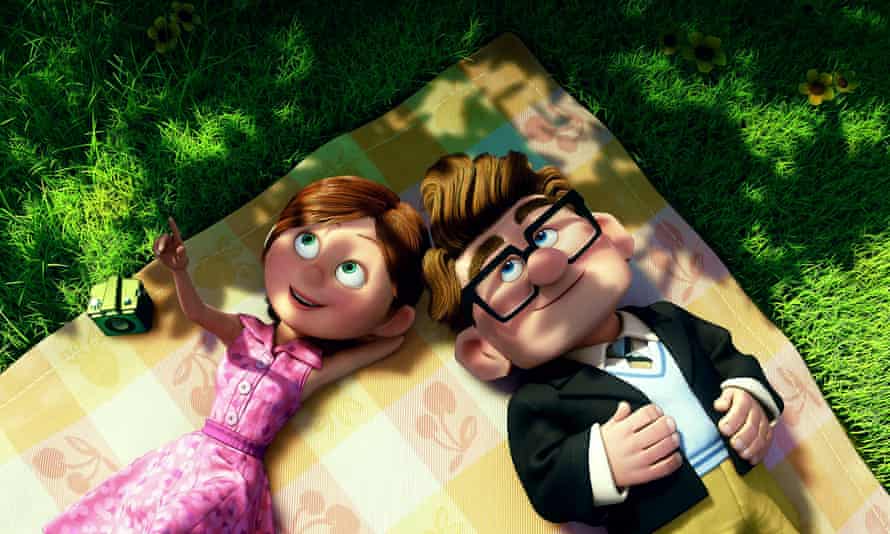 Pixar has long been on the cutting edge of where computer animation can go, but the heartbreaking montage near the beginning of Up is just as audacious in staking out new emotional terrain, too. Accompanied only by Michael Giacchino’s bittersweet score, this wordless prologue recaps the marriage between Carl (Ed Asner) and his late wife Ellie, two happy adventurers whose partnership is nonetheless defined by disappointment – first with inability to have children, then a trip to South America that never happens. The montage helps establish Carl as a lovable curmudgeon and set up his whimsical plan to reach South America by tying thousands of balloons to his house.

Up is full of delightfully silly touches, like a giant flightless bird named Kevin and a golden retriever with a collar that translates his thoughts into English but that montage, combined with Carl’s grudging friendship with a misfit boy scout, gives a special meaning to this incredible dream and the lifelong struggle to realize it. Family films are loaded with wish-fulfillment fantasies. Up is the rare one to consider the broad spectrum of feeling that can be invested in them. Scott Tobias 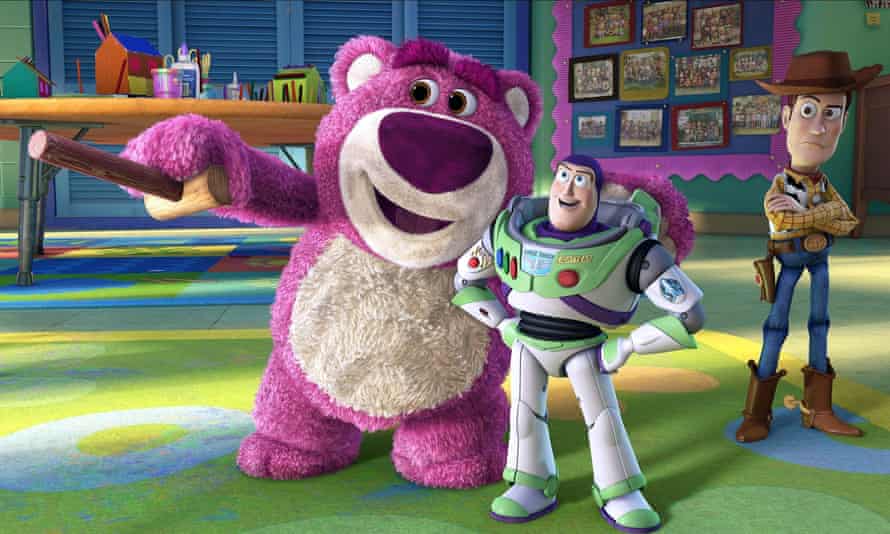 The Toy Story films always understood how objects can be the most accessible portals to childlike emotion, and the third film, released in June 2010, is arguably Pixar’s sharpest nostalgia missile. Andy, now 17 and bound for college, begins the film dismissive of his toys, which are accidentally set out for garbage. He ends it, in a scene that never fails to make me cry, by introducing them to a new home. The child, as Andy once was, greets them with the same unadulterated enthusiasm Andy once had. Woody’s bittersweet “so long, partner,” as Andy drives away is emotional kryptonite, instant Pixar canon.

I thought of that scene two Christmases ago, when my dad gave me a duplicate of the plush cat I’d cherished since age two. He had bought it as a back-up, in case I lost original Kitty and was inconsolable. You could not tell that the two Kittys were related, let alone once the same – one had been loved into a limp, matted heap, the other sat untouched in a drawer for 26 years. I cried for days afterward, in part because it was a sweet gesture, but mostly because I couldn’t stop thinking about them like Toy Story characters: two sentient beings who each endured the passage of time, who were in service for love, who had a lot to catch up on. Thanks to Toy Story 3, how else could I view them? Adrian Horton 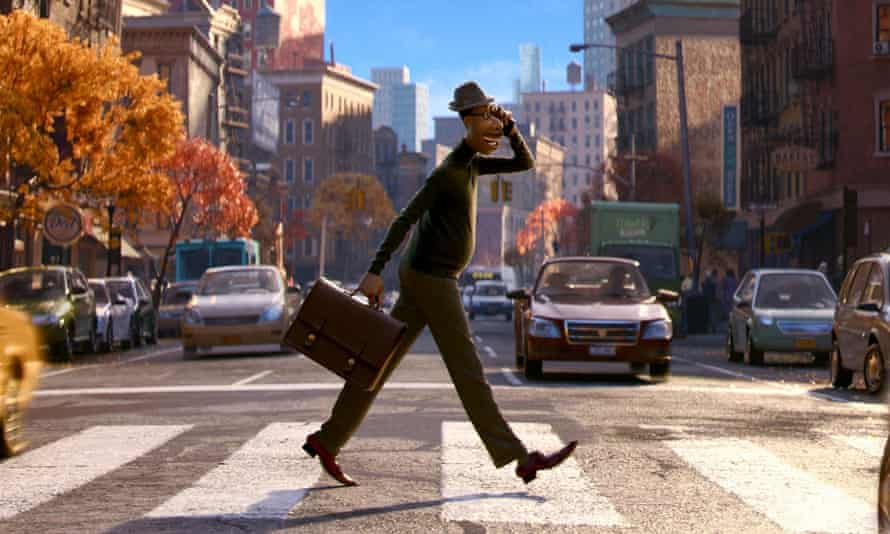 It is fitting that a movie about the experience of joy is itself a visually astonishing experience. Pondering exactly which moments make us thankful for the decades we get to spend here on Earth, Soul follows the existential adventure of jazz pianist Joe Gardner, who dies in the movie’s first few minutes and spends the rest of the film trying to get back into his own body.

Along the way, Joe spends a good deal of time journeying through the afterlife, and Pixar’s striking depiction of the Great Beyond, as well as the Great Before (where souls hang out before they acquire bodies), lingers long after the final credits have run. That, plus one unforgettably depicted moment when Joe realizes just what earthly joy is for him, make Soul more than just a visually dazzling film – it’s a movie that unites form with function, the two connecting as intricately and seamlessly as do Joe’s fingers with his piano when he’s lost in the euphoria of a jazz solo. Veronica Esposito 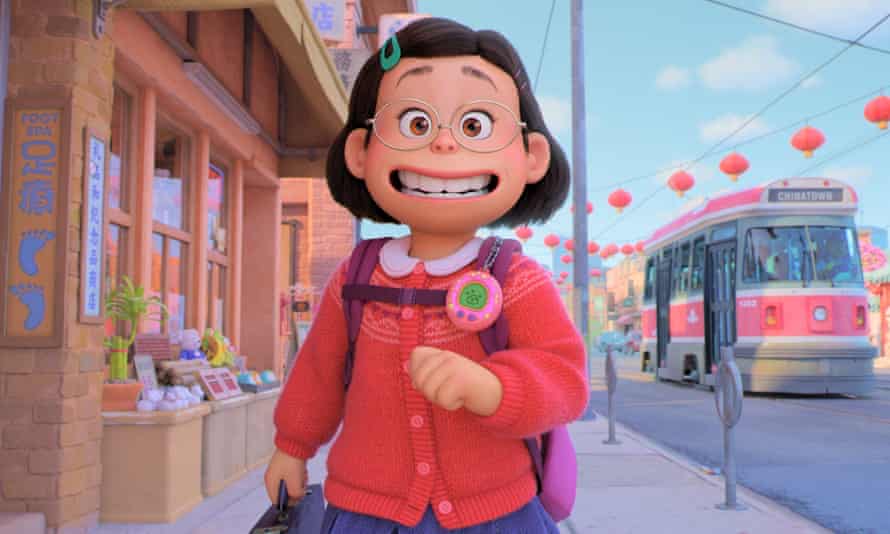 Turning Red is a refreshing counterpoint to the studio-defining Toy Story and its cinematic universe. While Toy Story’s adventures take place in a nondescript, spotless, always-sunny, somewhat timeless suburb, Chinese-Canadian director Domee Shi sets her film on the gritty streets (well, to the extent that a Pixar film can be gritty – ie, there’s light graffiti and litter) of her Toronto hometown – and specifically in an Asian Canadian enclave within the metropolis, during the year 2002.

Gen Z pop acts Billie Eilish and Finneas remarkably channel the sound of millennial boy bands with their earworms for Turning Red’s fictional group 4*Town, whose members are objects of white-hot lust for protagonist Meilin Lee and her buddies – they’re quite a departure from Randy Newman’s cheerfully platonic Toy Story ditty You’ve Got a Friend in Me. In short, Turning Red is a Pixar movie for the rest of us. Lisa Wong Macabasco