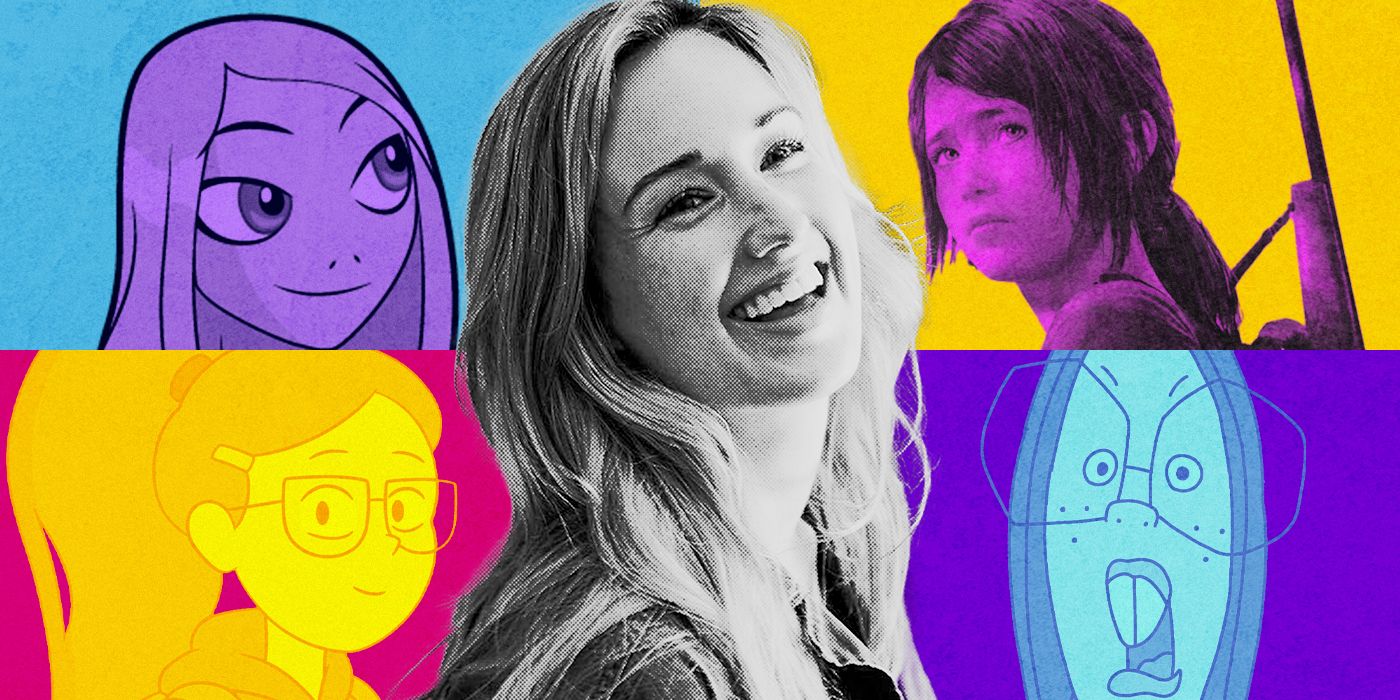 Acting as a career is an option for people of all ages, and Ashley Johnson has definitely shown that acting is something she not only loves to do but is something she is very proficient at doing as well! Starting from the young age of just six, she has amassed quite an impressive variety of credits, from shows to video games to even visual formats that are just now breaking the molds of what is possible with entertainment media! Here are the top 11 performances of Ashley Johnson.

RELATED: How ‘Critical Role’ Adapted a Dungeons and Dragons Game Into ‘The Legend of Vox Machina’

This role made Johnson known as a child actress as she took on the role of Chrissy Seave in the sixth and seventh seasons of Growing Pains after the character was aged up to five years old. Her performance on the show even got her nominated at the Young Artist Awards three times from 1991 to 1993, being nominated specifically for the “Exceptional Performance by a Young Actress Under Nine/Ten” (‘91and ‘92 respectively) and “Outstanding Actress Under Ten in a Television Series” in 1993.

When she was just starting to become a teenager, Johnson voiced a young Peter Shepard in the animated series of Jumanji, which ran from 1996 to 1999. This decision to have a female actor voice a young male is quite common, and it speaks to Johnson’s abilities that she was chosen to voice the character instead of an older actor with perhaps more experience in the field of voice acting. This entry also shows that she was not afraid to expand her skills into different formats, something that would become even more recognizable within her career as it went on.

In Blindspot, Johnson played the part of the head of the FBI Forensic Science Unit who helps to study the tattoos of Jane, the person that the show centers around. Patterson takes an immense amount of pride in her ability to decode the various tattoos and decipher the crimes that are hidden behind the inked codes. One scene in the show even gives a reference to another role she played in a new live-action show that was quickly gaining popularity for its unique format, showing just how popular her performances had become. In the scene from the episode “In the Comet of Us,” Patterson is asked if she wants to play a game, but is told that it isn’t “one of your wizard and elf games that takes four hours to finish.” She is later called an elf, to which she corrects them and states, “Actually, I am a gnome cleric” which is a direct reference to her well-known character, Pike Trickfoot, from Critical Role.

The release of Minecraft: Story Mode by Telltale Games took the franchise of Minecraft into new territory. Johnson voiced Petra, who had a significant role in both seasons of the game, which played out like a story where players made choices to alter the narrative in major and minor ways. While the game series as a whole received a rather lukewarm reception, it cannot be denied that the game’s existence was enough to show that Minecraft was not restricted to just being a game, but it had the potential to become an entire franchise. Johnson’s performance brought Petra to life as a loud, street-smart mercenary who wasn’t afraid to get her blocky hands dirty. However, Johnson was also able to give a more subdued performance when Petra catches Wither Sickness. This performance also helped to prove that she was once again more than happy to participate in yet another form of visual entertainment.

Ashley Johnson originally voiced the character of Terra in the Teen Titans animated series, and then she later reprised the role when Teen Titans Go! was released in 2013. While the latter show depicts Terra as being more of a comical villain, Teen Titans itself tackled a very mature plot narrative through Terra, opting to depict the character as one with trust issues and an inability to control her own powers. She becomes the love interest of another character, Beast Boy (voiced by Greg Cipes), and she goes through an entire arc that develops on the idea that she could potentially become a hero or a villain, depending on the actions of those around her. Johnson excelled at delivering emotional lines as Terra struggled with her desire to be in control and her growing feelings towards Beast Boy, something that was exemplified in the episode “Betrayal” when Beast Boy finds out about her allegiance to Slade.

In a newer format of visual entertainment, Johnson has participated in multiple campaigns of the popular tabletop role-playing game Dungeons & Dragons. While these games are usually played in a private setting with a group of friends, it has become more and more popular for voice actors and influencers to stream their games live on platforms such as Twitch and YouTube, turning collaborative storytelling in which everyone involved has an opportunity to shift the narrative with their character’s existence into entertainment. The introduction of the live-streaming allowed audiences across the globe to witness the exciting adventures that were unscripted and often improvised by both the players and, on some level, the Dungeon Master/Game Master. In this performance, Johnson played the role of Fearne Calloway, a faun Druid with an eye for collecting trinkets. This performance not only showed her abilities to think in character and make decisions on the spot, but it also serves as an example of how much fun one can get out of the game if enough time and dedication to the character is provided. Many individuals who start out playing Dungeons & Dragons may find themselves hesitant to full role-play a character, but Johnson makes it look easy as she dons the faun druid character in sessions.

Infinity Train is an anthology series based on the premise of a mysterious train that picks up passengers who have unsolved emotional problems or past traumas. Tulip was the first protagonist that audiences saw board the train, and Johnson’s performance as this smart and rational individual who tried to ignore their emotions instead of facing them head-on immediately felt like a perfect fit, according to the show’s creator Owen Dennis‘ blog. Johnson’s ability to vocalize emotion through her performance in many of her roles is prominent here as her performance as Tulip feels lively and believable. Johnson also went on to play a protagonist from the second season, a reflection of Tulip known by most as MT, or Mirror Tulip. This is a temporary name, however, as she eventually decides to call herself Lake instead. Johnson did such an impressive job at voicing Tulip and Lake that even though they sound exactly the same, they feel like two vibrantly different people with their own desires and emotions.

With the growing popularity of live-streaming, audiences have been able to enjoy shows that otherwise would never have had the opportunity to shine, such as the popular series mentioned earlier known as Critical Role. Johnson was a part of the Dungeons & Dragons campaign as Pike Trickfoot, a gnome cleric who is compassionate and extremely faithful towards her goddess, Sarenrae, she also reprised the role when the campaign got turned into an animated series. This series, titled The Legend of Vox Machina, gave a fresh perspective to the events depicted from Critical Role while also giving a new prologue story with the group of adventurers. While Johnson’s performance as Pike feels the same here as it did when she originally portrayed the character, the mere fact that she was now voicing a character that she originally created herself for a tabletop game in an animated series is a feat that has never really been accomplished before, and it no doubt will become a new goal for aspiring tabletop game performers to achieve.

The franchise of Ben 10 has existed since 2005, and while Johnson did not voice Gwen Tennyson in the original series (that role was voiced by Meagan Smith), she did end up voicing her from 2008-2014, spanning three separate shows within the Ben 10 universe. Ben 10: Alien Force and Ben 10: Ultimate Alien both portrayed Gwen as a teenager who is learning to use and further control her magical abilities, while Ben 10: Omniverse gives her a less prominent role within the core cast as she departs for college. Even with this small departure within Omniverse, Gwen played a significant role as part of the core trio in Alien Force and Ultimate Alien, thus making it one of Johnson’s more prominent recurring roles.

Johnson also voiced the academic excelling student of Gretchen Grundler within the cartoon show Recess from 1997-2001 and reprised the role in the series’ four films. The show had excellent writing, and Gretchen herself was portrayed as a young prodigy that, while intellectually smart, was very naïve and whimsical at heart. Despite this jump in academic intelligence in regard to the other members of the gang, she much preferred them to seeking others with academic interests. This is likely the most memorable role that Johnson played if you watched the series growing up.

When The Last of Us released in 2013, it started a conversation about if video games should be perceived as art. Part of that discussion has to deal with the monumental role that Ellie, the young girl that Johnson voiced in the game, played within the narrative of the story. The traumas of her past and the harsh world that she found herself in during the duration of the original game and its sequel molded her into a tough, resilient character.

Throughout the first game, Ellie is constantly stuck between keeping her innocence as a child, talking about comic books, and telling fun jokes to pass the time and the cold reality that almost everything in the world she lives in is out to kill her, if not to do something worse. It also doesn’t help that she was the hope for humanity, her body’s natural resistance to a deadly virus could have been a miraculous cure for the apocalyptic world. Johnson not only did an incredible job at balancing these two very different aspects of the character but also delivered a performance that made Ellie real, especially when combined with the game’s stunningly realistic visuals (especially for 2013’s standards). All in all, Johnson’s performance as Ellie was complex, emotional, and one of her most memorable roles.

Ashley Johnson Talks SPOOKED, How She Got Involved, the Shooting Process, and More


James White is a graduate from the University of Nebraska in Lincoln who loves to write and analyze various forms of media. Having just started his career with Collider in Fall of 2021, he hopes to bring a unique light towards shows that may otherwise be missed out on. His favorite movie is Spiderman: Into the Spiderverse, not just for the good story or the amazing animation, but for the incredible soundtrack as well!

Arnold Schwarzenegger, With a Net Worth of $450 Million, Cut Financial Support From His...

Ruben Randall - October 17, 2022 0
TV/Movies
Things are not looking great for Jennifer Walters in the penultimate episode of She-Hulk. After she teams up with Matt Murdock — a cameo...

Is She Difficult? Amanda Seales to Develop Scripted Series With Bunim/Murray...