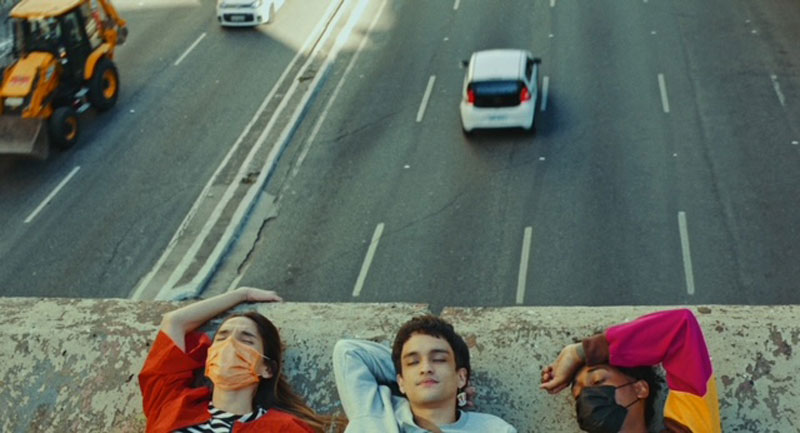 When I was last at the Berlinale film festival almost exactly two years ago, crowds had already started to vanish. Now, forty-eight months later, the feeling inside and around the event is eerily similar to those final moments in 2020—enervated, devoid of mobs, but adamantly festive in its formal arrangements. Being here again, I’m experiencing an unanticipated déjà vu. The halls are as empty as when I left.

The red carpets, press centers, and fastidious security guards checking badges (this time a little more relentlessly); the signature pre-film music blasting on speakers outside the Berlinale Palast; flecks of light from an enormous disco ball’s mirrored surface dancing across the building’s exterior. The venue is replete with all the trappings of one of the world’s largest film festivals. But spaces sound different without people to absorb their acoustics.

It seems appropriate to start my festival with a patient, understated documentary by Austrian filmmaker Constantin Wulff in which the austere tone creeps up on you. Für die Vielen – Die Arbeiterkammer Wien (For the Many – The Vienna Chamber of Labour) (2022) follows the daily operations of this unique Austrian institution for which the film is named. Everyday the Viennese Chamber of Labour communicates with a huge number of people fighting for civil rights in the workplace. Wulff records a swarm of individuals who approach the bureau with issues of employer negligence, abuse, and inequity. Wulff depicts the nearly incessant flow of requests with the same pragmatism the bureau uses when treating them.

As For the Many illustrates, the steadied actions of an organization like those of Vienna’s Chamber of Labour allow it to be a bastion of equitable societal infrastructure. Just as the Chamber of Labour is preparing for its centennial celebration, the pandemic hits, and the organization is forced to maneuver swiftly, reinventing procedures and practices both for its own offices and for a labor landscape grappling with unforeseen concerns. If there’s one thing we’ve learned since 2020: capitalism halts for no one. Our bodies, employers, income, social institutions, and relationships might break down, but commerce continues at an unforgiving pace. The Chamber is an inspiration in its response, and it’s refreshing to watch a film that doesn’t drown in institutional dysfunction or tears, but instead honors steadfast functionality.

This is my daily routine for access: I stand in front of the mobile testing unit for festival badge holders, log in to the web link on my phone, show my QR code I registered for on day one, get swabbed, wait for my results, share the results at another tent, then finally receive a colored concert-style Tyvek wristband that serves as my day-pass to all Berlinale events.

I am up early to get tested before my 9 a.m. screening of Dario Argento’s latest, having rushed to Potsdamer Platz from my apartment to beat the lines. When I arrive, only two people stand ahead of me. Birds fly across the vacant space.

Then, I watch Argento’s Occhiali neri (Dark Glasses) (2022), which is a deliciously gory little film that’s almost more true to the giallo genre than some the master himself crafted early in his career. When was the last time you saw a lightning-paced movie about a beautiful blind Italian prostitute who takes in a seven-year-old Chinese boy whose parents she accidentally kills while running from a crazed serial slasher murdering high-end call girls?

With its miraculous score (by Arnaud Rebotini) and acutely campy affect, the movie dispenses with pretense, hurtling us along its bizarre path, all framed by a literal eclipse—a harbinger for the impending ocular disaster in the film. Having seen my fair share of Italian giallo, I can’t help but think about this piece almost like a period remake, Argento remaking Argento, drawing upon and updating signature material (and tone) from the sub-genre.

Since its inception in 1971, the Berlinale’s Forum has highlighted a decidedly anti-colonial perspective. This year is no exception, and among a number of interrogations typical of Forum programming, Kumbuka (2021) stands out, almost as a kind of document of a film in its unmaking (or unmaking of the colonial gaze).

The lean, fifty-nine-minute feature is a kaleidoscopic scrutiny of subjecthood, power, and the camera’s role in crafting fallacies related to both. By interspersing old archival colonial footage along with that of two young filmmakers deep in the process of re-editing a Dutch film about themselves, Kumbuka keeps authorship fluid. Free-standing conversations between director Katondolo and a young African American student also comprise part of this cocktail, as do speculative Afrofuturistic segments at the film’s conclusion. All these ingredients fit together naturally. A rhythm forms in the light-footed way this work creates an argument for complexity of representation, eschewing long-standing tendencies to present African subjects as “objects on which actions are performed.” A true sense of co-authorship ensures a multidimensional sense of agency.

Co-authoring is on my mind and seems to be infiltrating four excellent films I see on Day Three. All worth covering. But Robinson deserves special attention.

À vendredi, Robinson (See You Friday, Robinson) (2022) is like a book of interchanges, a compilation of engagements. Iranian filmmaker Mitra Farahani concocts a dialogue between Jean-Luc Godard and Ebrahim Golestan that occurs exclusively via email. That the esteemed directors—whose careers traverse at least half a century—never meet, nor speak over the phone or in person is part of the film’s narrative allure. Farahani’s camera reflects this correspondence by tracking both directors in their home environs, enmeshed in their daily routines while peripherally musing on the other’s jottings. The two carry on, sending off a note every Friday for twenty-nine weeks.

But of course the back and forth is never just that. No straightforward greeting, more a provocation to reve(a)l in/through enigma. Godard first proffers the riddle. He emails like he makes films—cutting up, thwarting clarity, opting instead for collage and word play (e.g., “word-king class”). At one point, he even rephotographs Golestan’s Arabic script, abstracting the alphabet and turning it into an image among others that he sends back.

Sharp as a knife at ninety-nine, Golestan initially approaches the Swiss filmmaker’s playfulness with a blend of intrigue and suspicion. As the two Robinsons (Godard first applies this moniker to Golestan) continue to send dispatches from their desert islands, they fall in sync, riffing and improvising off the other’s moves. Rather than hammering home a portrait of these two giants, Farahani gives the film a uniquely compound shape informed by some of the shorthand and disruptive tactics both Goddard and Golestan employ. A meditation on isolation, letter-writing, making art at the end of one’s life, and the untranslatable.

Viruses: they shuffle our days and space. Everyone here in Berlin, on the subway and buses, wears an N95 mask. Entering most establishments requires proof of vaccination and same-day negative test results. I see Gustavo Vinagre’s Três tigres tristes (Three Tidy Tigers Tied a Tie Tighter) (2022), whose near future isn’t so far from ours. In the opening scene, the “Golden” strain of the virus is widespread, inflicting psychological trauma on its victims. The ill suffer amnesia.

But it’s amnesia Três tigres tristes opposes. Vinagre’s most recent film envisions new community and queer kinship as the means to hold on to disappearing memories and the past. Three young characters drift across the city of São Paulo. As they slowly make their way to and from appointments, the trio has a suite of encounters—a YouTube makeup artist shooting on the street; a potential lover who later forgets he ever met them; an elderly client who hosts the whole group while paying one for sex. Each individual from these rendezvous becomes part of the group when, later, the three find themselves in a quirky antique shop that morphs into a dream salon-cum-cabaret-turned-campy-masturbation party in which all the characters commune with each other and objects. Some version of their idealized or imaginary selves lurk here as does a glorious guinea pig in drag who steals the show.

The urgency in the film’s utopic, congenial ambling reminds me a little of Ulrike Ottinger’s gonzo surreal lesbian pirate film Madame X: An Absolute Ruler (1978). The pace of both films is informed by a wandering, communal queerness. In a world where the virus’ variants have exhausted the Greek Alphabet, Tigers gives us hope of undermining illness’ storylines and revamping our routines.

On February 1, 2021, the Myanmar army overthrew the democratic elections and seized power, squashing dissent and brutalizing citizens. Reuters recently reported that in the past year the junta has killed over 500 people, illegally detained 12,000 with another 8,800 remaining in custody.

Myanmar seems to have receded from the public eye. Why is that? The Myanmar Film Collective’s courageous Myanmar Diaries (2022) is a blend of covertly shot cellphone footage and staged scenes dramatizing atrocities experienced by the Myanmar people at the hands of the military dictatorship.

When I think about war, I think about translation—mainly, what is not able to be translated.The blind fanaticism of power-hungry ideologues like Putin or Senior General Min Aung Hlaing. The incommunicable fear of being the subject of genocide. The sheer ruin of constant bombing, of which we in America have seen and enacted so much, but experienced so little. The hodgepodge format of this filmic diary highlights that which cannot be fully represented in any sort of wholeness. The Oxford English Dictionary defines “correspondence” as: “the answering of things to each other.” Perhaps this is what radical correspondence looks like.

In no way do I want to homogenize the Berlinale’s weirdness. But many of the films presented at the festival insist upon adaptive forms of correspondence, be they in the form of letters penned by a department of labor; profound conversations with colonial footage; an improbable, post-trauma duo responding to each other and the world anew; notes exchanged between two cinematic auteurs; expansive conversations between queer generations in dystopian Brazil; or the anonymous dispatches from the front lines of human atrocity. Deep exchange, epistolary, communiqué, and messaging take place during an era in which we are smothered with constant contact, but low on presence and in desperate need of abundant dialogue with plenty of room for play, touch, all our flaws, and new visions for communing.

Ruben Randall - May 26, 2022 0
Actress
Behind every goodfella is a goodgal, and that’s especially true of Ray Liotta and Lorraine Bracco. Martin Scorsese’s Goodfellas is one of the best...