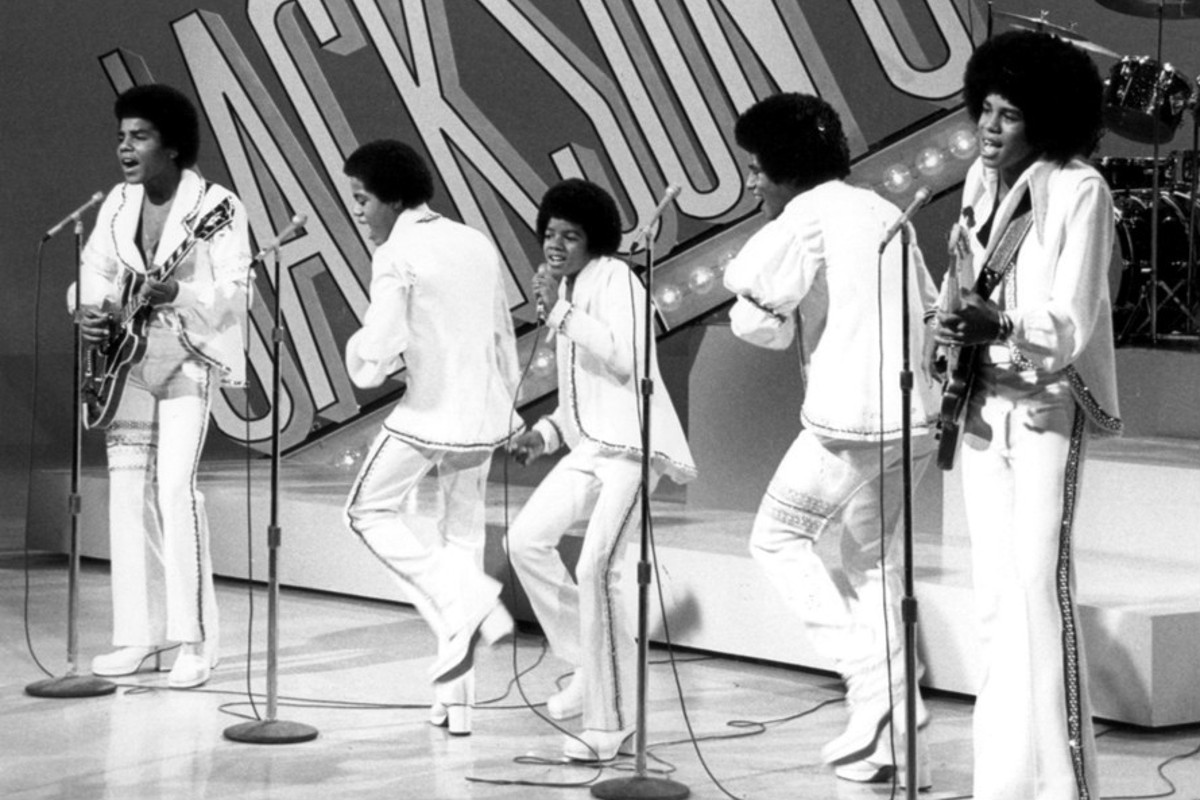 Universal teen hearts broke with the news that K-pop supergroup BTS is going on hiatus. The group’s incredible 10-year run not only generated hundreds of millions of dollars, but created a musical monster.

No matter how highly produced and industry-created the band, there’s no denying that there are good tunes and a dark history in the bubble gum pop mix. Defined by the Oxford English Dictionary as “a pop group composed of young men whose music and image are designed to appeal primarily to a young teenage audience,” this description excludes two important facts: Boy bands actually construct quality songs, and as young men, have been often exploited throughout their six decades of existence.

Boy bands at once offer listenable gems and a shadowy world behind the shiny curtain. Hop on in with The Manual to cruise through some of the brightest and bleak moments for boy bands in the last 60 years.

The term “boy band” wasn’t established until the late 1980s. Before this time, all-male pop groups were genre labeled, beginning with a cappella barbershop quartets in the 1940s and 1950s. Although generally known as a rock group, the highest-selling band in history, The Beatles are considered by many to be the first boy band due to the screaming hordes of teenagers that welcomed the Fab Four to the United States. The Beatles even inspired the first commercially created, successful boy group, The Monkees, for television in 1966.

Two early (mostly) vocal groups helped shape the template for the boy band format: Osmond Brothers and The Jackson 5. The musical acts tend to fall on different sides of the spectrum, though.

After being discovered as four kids performing an adorable Disneyland barbershop quartet, the four oldest Osmond brothers debuted on the Andy Williams Show in 1962. Their performance led to regular appearances that were soon punctuated by five-year-old Donny’s addition. The late 1960s and 1970s would see the kids go from child stars to cultural icons, first as a boy band and eventually as the Donnie and Marie Osmond duet. Though their fame allowed the Osmonds to dabble in an incredible variety of genres, reports remain consistent that the squeaky-clean Mormons from Ogden, Utah never indulged in showbiz’s excessive temptations.

Their peers from Gary, Indiana, The Jackson 5, helped spawn The King of Pop, but there are many knottier elements to the Jackson story.

Hailing from a rough part of town, fearsome father Joe Jackson needed a way to keep the boys from the street’s temptations. From the time before the youngest member, Michael was five-years-old, the brothers performed in local malls and at parties. They’d become a smash on the heels of their first single, Big Boy, recorded in 1968 for Steeltown Records. The local hit led to a contract with Motown Records the next year. Though the band was a smashing success, this came at a steep price.

The Guardian reported that father Joe Jackson would beat his kids with a belt, a cord, or a branch if they dared make a mistake during practice. Michael, the group’s lead, would endure psychological abuse in addition to physical wounds. On learning the boy was self-conscious about the size of his nose, Joe Jackson began to refer to him as “Big Nose.” The Associated Press reported that Michael was so afraid of his father’s wrath that he would sometimes vomit when in the presence of the elder Jackson.

With Menudo (a Spanish synonym for little and, in Puerto Rican Spanish, loose change), viewers get to see how ridiculously young these boy bands can be and how vulnerable these kids are.

Producer Edgardo Díaz formed the Puerto Rican-based Latino boy band in the late 1970s. Releasing their first album in 1977, the band became one of the most popular acts of the 1980s, especially in the Latin teen music world. While selling over 20 million records, the band had several radio hits, including A Valor and Quiero Rock. Like The Beatles before them, Menudo’s success led to two films: Una Aventura Llamada Menudo and Menudo: La Película. The band was a starting point for pop stars Ricky Martin (1984–1989) and Draco Rosa (1984–1987).

Menudo would eventually feature 32 different boys during its initial 32-year run. Díaz instituted a “Fountain of Youth strategy” for Menudo, where members would be replaced once they turned 16. Parents of the boys — many of them poor — would sign over parental authority to the manager. Both of these facts feature prominently in HBO’s new Menudo documentary, Forever Young.

In the video account, former members claim to have endured continual sexual abuse in addition to bullying, drug scandals, and oppressive working conditions under Díaz’s negligent and exploitative watch.

Beginning with Boston group New Edition in 1978, the boy band reached epic popular heights in the 1980s and 1990s, much of it backed by producer Maurice Starr.

Originally formed by Bobby Brown as a “new edition” of The Jackson 5, the band would put out hits throughout the 1980s and launch Brown’s solo career and the 1990s hit R&B groups Bell Biv DeVoe (known as BBD) and Boyz II Men.

Really just a young group of men looking to break into the mainstream, Boyz II Men received their big break in 1989 when they met Bell Biv DeVoe member Michael Bivins backstage during a show, impressing him with an a cappella rendition of the New Edition song Can You Stand the Rain. Soon after, Bivins helped sign them to Motown Records (now in Los Angeles, California). Two years later, Boyz II Men would debut one of the most successful R&B records ever, Cooleyhighharmony.

Over the next 25 years, the smooth-singing group would release five hit singles and 12 albums, going on to win four Grammys, nine American Music Awards, nine Soul Train Awards, and three Billboard Awards, and earn a star on the Hollywood Walk of Fame.

Meanwhile, New Edition’s former promoter was busy. After Starr led the band to create hits like Candy Girl, he would eventually separate from the group enmeshed in legal battles. Determined to overcome this setback with an innovative idea, Starr evolved his boy band vision.

“If New Edition was as big as they were, imagine what would happen if white kids were doing the same thing,” Starr told The New York Times.

In the summer of 1984, he asked talent agent Mary Alford to scour hardscrabble Boston neighborhoods for “white boys with the ability to rap, sing, or dance.”

The five-teen combination they’d finally settle on would create one of the first true megastars of the modern boy band era, New Kids on the Block. New Kids (later referred to as NKOTB) would not only go on to sell over 70 million albums, but they were also a promotional force. In addition to 1990s neon-splashed magazines, the band would spray their faces on almost any product where their mugs would fit — notebooks, pencil cases, lunch boxes, and pillowcases — to the countless fans filling sold-out concerts.

The influence of Boyz II Men and NKOTB would lead to the height of the commercial teen pop explosion in the late 1990s, punctuated by a band formed in Orlando in 1993. The Backstreet Boys introduced a hybrid of R&B ballads, hip-hop juice, and magnetic dance pop that would eventually propel the group to global superstardom and multi-platinum albums. Total sales of over 130 million albums make Backstreet Boys the most popular boy band of all time.

Post producer Lou Perlman’s success with the Backstreet Boys set him out to find another successful group of teen idols and he found them in the same Florida town.

Hailing also from Orlando was a band of boys named by Justin Timberlake’s mother, who commented on how “in sync” the group’s singing voices were. This just so happened to line up to the founding members’ first names: JustiN, ChriS, JoeY, JasoN, and JC. When Jason Galasso dropped out at the last minute, however, the group recruited a 16-year-old from Mississippi named Lance Bass. Upon acceptance, Bass was dubbed “Lansten” to keep aligned to the “NSYNC” concept.

With a string of hits and multi-platinum albums, the band would achieve megastardom and sell over 70 million albums over the next decade plus.

In the early 2010s, there was a resurgence of boy band popularity not in the United States, but in places both old and new.

One Direction, the British-Irish male vocal group, made their impact in the early 2010s with a tried-and-true formula: Stylish looks and bright pop rock sound. They were also formed by record producers, and in this case, on the British show The X Factor, a televised talent contest for aspiring singers. Although the new group didn’t win X Factor, the show’s inventor, Simon Cowell, offered the charismatic act a recording contract soon after the season’s end.

In the tradition of earlier pop music “boy bands,” One Direction was promoted as a set of teen idols that were musically compatible while remaining distinct in style and personality. They also used new school tools to conquer the American market. After building their fan base by touring the British Isles with harmonized pop sugar on its 2011 album, Up All Night (highlighted by What Makes You Beautiful riding the top of British and Irish charts), the band hit the States via social media.

In 2012, when the band finally arrived in the U.S., Up All Night debuted at number one on the Billboard charts and went on to sell more than a million copies. Two albums, 70 million albums sold, and a 3D concert tour later, One Direction began to take off on solo careers in 2015. This opened the door for BTS, which is maybe the most popular boy group the world has ever seen.

BTS brought in $130 million in 2019 sales from merchandising alone, according to The Hollywood Reporter. In addition to record-setting views for YouTube music videos and album purchases, the seven-member K-pop group has become a worldwide sensation.

First discovered in 2010 by South Korea’s Big Hit Entertainment, BTS received intense training on how to become superstars after a grueling audition period. This included dancing and singing lessons as well as acting and media training. The difference between BTS and previous boy bands is that Big Hit stuck with BTS for over a decade.

The boy group’s youngest member, Jungkook, is now 24 after beginning as a 14-year-old trainee. This has led to a seasoned and stalwart group, on stage and off. In 2019, BTS became the first K-pop artists to present at the Grammy Awards, and the next year, the first to perform at the award show. The band members are staunch advocates for their Korean ancestry and dialect. BTS also donated $1 million to the Black Lives Matter movement and reserved thousands of tickets for former President Donald Trump’s Oklahoma rally before leaving the seats vacant.

Boy bands may be bubble gum, but their music takes real talent and their melodic grooves are among the bestselling albums and tracks in industry history. Though often manufactured, legions of boy band fans are earned through hard work and sacrifice. If you can sneak in a minute to listen, you may find a melody that catches your ear.

See also  Yuriorkis Gamboa: When I Beat Isaac Cruz, I Want The Rematch With Gervonta Davis

Ruben Randall - December 4, 2021 0
Celebrity
Little Mix sent shockwaves through the music industry yesterday when they announced their plan to split, 10 years after finding fame on The...

Exclusive: Inside the Sh*tshow That Was the Trump-Biden Transition