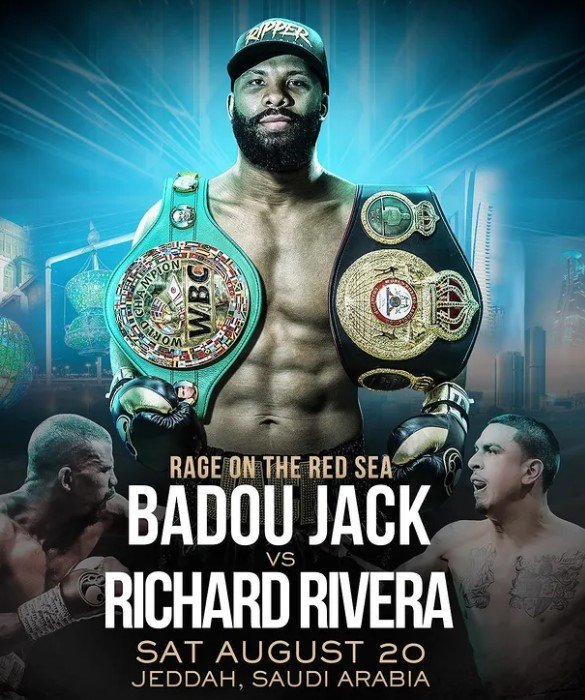 The boxing world is ready to see the much-anticipated rematch between Anthony Joshua vs Oleksandr Usyk for the unified heavyweight championship. The bout is set to take place on August 20th in Jeddah, Saudi Arabia. While many look forward to the main event, there are also plenty of great matchups on the undercard of this event.

One such bout involves former two-division champion Badou Jack and American boxer Richard Rivera who will face off in a 10-round light-heavyweight contest. Coming into this fight, both boxers would look to add another victory to their names while fighting in front of the largest audience of their careers. So let us take a look at everything you need to know before this fight.

Jack is a 38-year-old Swedish boxer and former middleweight and light heavyweight champion. He stands at 6-feet-1-inch and has a reach of 73 inches. Moreover, he is coming into this fight with a record of 26-3-3 with 16 KO victories, giving him a 50% KO rate.

Rivera, on the other hand, is a 31-year-old boxer who is a relatively unknown prospect competing in the lightweight division. He stands at 6 feet tall and has an undefeated record of 21-0 and also has 16 KO victories, giving him a 72.3% Ko rate.

Other facts about Jack and Rivera

Out of the two, Jack is certainly the more recognizable name. He is a veteran of the sport and is a solid, all-around boxer. Moreover, he possesses a decent jab and is also a good counterpuncher, and is also the favorite to win coming into the fight. Jack is a former Olympian and had a good amateur career before turning pro back in 2009. He is currently on a four-fight winning streak, beating Hany Atiyo in his previous fight. The Ripper has also tried his hand at promoting fights as he is the president of Badou Jack promotions.

Rivera, on the other hand, will look to leave his mark in boxing with this fight. He has had a short amateur career and only turned pro back in 2017. Although he is still undefeated, he is yet to face the level of competition that Jack has. Moreover, 14 of his 21  wins have come against boxers with losing records. However, the American boxer does have underrated power and could upset Jack on August 20th.

Who do you think will win? Let us know in the comments.

Arnold Schwarzenegger, Who Added Nearly $50 Million From ‘The Terminator’ Series to His Net...