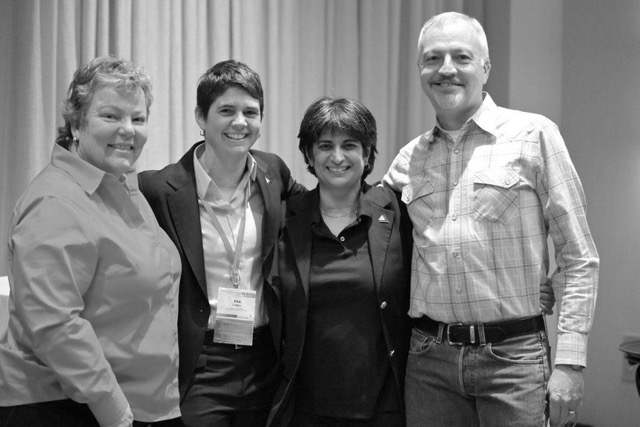 Joe Tom Easley, a nationally recognized attorney and LGBTQ rights advocate who taught at three U.S. law schools and served on the boards and in leadership positions at several national and D.C. LGBTQ and human rights organizations, died Feb. 13 at a hospital near his Miami Beach residence of complications associated with lung disease. He was 81.

Peter Freiberg, Easley’s husband and partner of 39 years, said Easley’s skills as a negotiator, speaker, teacher, and political strategist enabled him to serve as a volunteer advocate for LGBTQ and civil rights causes beginning in the late 1970s, when he began as a tenured law professor at American University Law School in D.C.

In 1978, according to Freiberg, Easley was appointed as an assistant dean at the A.U. Law School in addition to his teaching duties at a time when he came out as gay. “At that time, there were very few out university administrators,” Freiberg said.

From 1981 to 1983 Easley worked as a professor at the then-Antioch Law School in D.C., where he also served as an adviser to LGBTQ student groups. Antioch’s D.C. Law School later evolved into the University D.C. Law School.

Freiberg said that around the time Easley left Antioch in 1983 he began his affiliation as a lecturer with BARBRI, the nation’s largest training course and coaching program for law school graduates preparing to take their state bar exam.

“Based on student reviews, he was an extremely popular lecturer, making even his assigned, somewhat difficult subjects – contracts and real property law – interesting and enjoyable,” Freiberg said. He said the BARBRI organization arranged for Easley to travel to cities throughout the country to give his bar preparation lectures, usually in the months prior to when the winter and summer state bar exams are given for prospective lawyers.

He continued his lecturing with BARBARI until his retirement in 2013, Freiberg said.
Easley became active with D.C.’s Gay and Lesbian Activists Alliance from 1980 to 1982, according to Freiberg, and in 1982 Easley was elected as president of the Gertrude Stein Democratic Club, D.C.’s largest local LGBTQ political group. Freiberg said that around that time, then-D.C. Mayor Marion Barry appointed Easley as a member of the D.C. Police Civilian Complaint Review Board, which LGBTQ activists played a lead role in persuading the D.C. Council to create.

“Joe Tom was certainly a passionate, articulate and politically savvy champion of human rights in so many ways, most crucially in the fight to establish a Civilian Complaint Review Board,” said D.C. LGBTQ activist Craig Howell.

In 1983, Easley moved to New York City to live with Freiberg after the two became a couple that year. A short time later, Easley, while continuing his activism, enrolled in Yale University’s graduate school where he received a master’s degree in public health in 1986. Freiberg said Easley then taught public health law at Yale’s medical school part time for the next two years. During his time as a student and as a teacher at Yale, Easley commuted from Manhattan to New Haven four days a week, Freiberg said.

Easley, an only child, was born in Robstown, Texas, near Corpus Christi and spent his early childhood years in Truby, Texas, a small farming town where he started school in a one-room schoolhouse. His family moved to Eagle Pass, a Texas border city on the Rio Grande River in 1950, Freiberg said, where Easley graduated from Eagle Pass High School.

He received his undergraduate degree with a major in English from Texas A&M University in 1963. Freiberg said when Easley was about to be drafted during the Vietnam War in 1966, he enlisted in the U.S. Navy and served on a Naval intelligence base on a small island near the Alaska-Russian border.

“After a year, he was told that a friend who had propositioned him for sex before he ever joined the Navy informed the government that he was gay,” Freiberg said in recounting Easley’s brief period of military service. “His commander apologetically told him that he had no choice but to kick him out—all gay people were barred from serving—but that because of his exemplary service he would ensure Joe Tom received an honorable discharge and veteran benefits.”

His Navy benefits through the longstanding G.I. Bill veterans’ education program helped to pay Easley’s tuition at the University of Texas School of Law in Austin, where he received his law degree.

After law school Easley served as a law clerk for a federal judge in Boston from 1971 to 1972 before serving as an assistant professor for the next two years at the University of Georgia Law School in Athens, Freiberg said.

Easley next left for Europe in 1975, where he worked for the Brussels-based European Bureau of Consumer Organizations. Among other things, he assisted with an investigation of price-fixing by pharmaceutical companies.

Freiberg recalled that over the course of his career Easley also taught part-time for short periods at the University of Virginia Law School and New York’s Cardozo Law School.

He said Easley’s devotion to LGBTQ equality and civil rights for other minorities, including African Americans, began in full force when he returned to the U.S. from Europe to begin teaching at American University in D.C.

In addition to his affiliation with local D.C. LGBTQ groups, over the next 30 years Easley became involved with and helped advance the work of a number of national LGBTQ organizations. Among them was Lambda Legal, the New York-based LGBTQ litigation group for which Easley served on the board of directors from 1981 to 1991 and as board co-chair from 1983 to 1987.

From 1988 to 1995 he served as president of the Human Rights Campaign Fund Foundation, which later changed its name to the Human Rights Campaign Foundation. He also served on the board of the Servicemembers Legal Defense Network (SLDN), a national group that assisted LGBTQ service members facing discharge from the military due to their sexual orientation or gender identity.

Freiberg said Easley’s own discharge from the Navy for being gay helped to solidify his commitment and dedication to the cause of LGBTQ service members.

With Easley’s active involvement, SLDN played an important role in the successful campaign to persuade Congress to repeal the “Don’t Ask, Don’t Tell” law, which continued to be used to discharge LGBTQ people from the military if their sexual orientation or gender identity became known to military authorities.

Freiberg said Easley’s skills as a public speaker on behalf of LGBTQ equality surfaced in 1988 when he delivered the closing speech before more than 200 LGBTQ leaders from across the country attending a “War Conference” in Warrenton, Va., called by AIDS activist Larry Kramer to draw attention to the continuing AIDS epidemic, anti-LGBTQ court decisions, and anti-gay vitriol by religious right groups.

In what he and Easley also considered a gesture in support of LGBTQ equality, Freiberg said he and Easley in 2003 traveled to Toronto to legally marry. Their wedding became what the couple believed to be the first same-sex wedding to be written about in the New York Times’s wedding celebration feature.

“We felt strongly that legal marriage would not make one bit of difference in our relationship, and it didn’t,” said Freiberg. “But we wanted to make a political statement that our love and devotion was equal to anyone else’s, and that gay couples deserved equality before the law, including benefits and responsibilities,” Freiberg said.

“His whole life was animated by a desire to work for social justice and to do good,” said Freiberg. “He supported the underdog, whether LGBT people, African Americans, an injured Iraqi boy or the disabled, which he was in his last three years.”

Freiberg was referring to the national news media attention Easley received in 2005, including a story in the New York Times, after he arranged for an Iraqi boy injured in Iraq by a U.S. bomb to be brought to the U.S. for medical treatment.

“Joe Tom Easley was a dear friend and mentor who taught me much about leadership, LGBT politics, the law and about giving,” said Vic Basile, former executive director of the Human Rights Campaign and a longtime LGBTQ rights advocate. “He led by example, giving generously of his time and broad knowledge to help others in need, never asking or expecting anything in return,” Basile said.

Easley was predeceased by his parents, Tom Lee Easley and Lady Hampton Easley.

He is survived by his husband and partner of 39 years, longtime journalist Peter Freiberg; his sister-in-law and brother-in-law Eileen and Barney Freiberg-Dale; his niece, Sabrina Freiberg-Dale; his nephew, Hunter Dale and fiancée Eve Lichacz; a cousin, Jane Hays; and many friends around the world.

Plans for a memorial service, including a memorial event in D.C., will be announced. Contributions in his memory can be made to Lambda Legal, the U.S. Holocaust Memorial Museum, and the National Parks Foundation.

Maya Jama shares a glimpse of her toned-midriff in a chic...