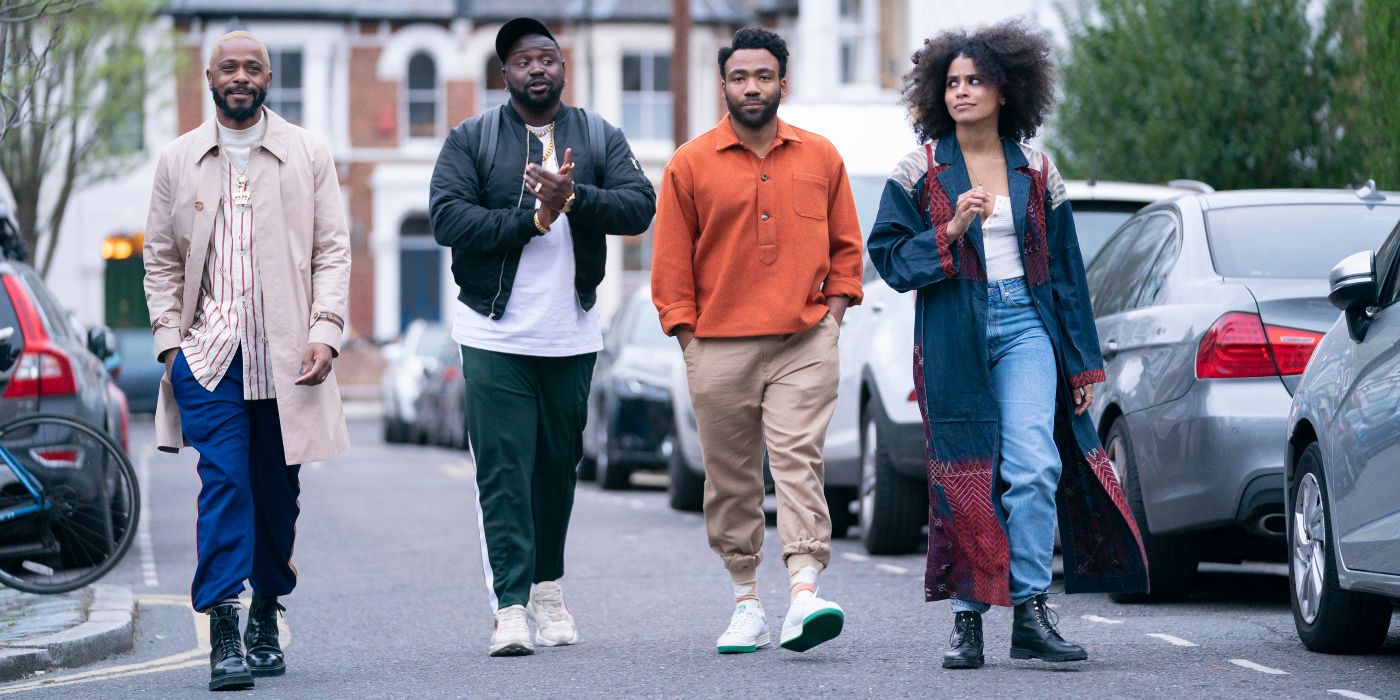 After six years and four seasons, the FX comedy-drama Atlanta will touch down for the final time this year. The series led by Donald Glover made its mark in pop culture as a distinct and surreal show that brought Black-centric experiences to the forefront. The show particularly draws from Glover’s own experiences living in his hometown of Atlanta, Georgia, which is a significant place that cultivated rap culture. The unpredictable plots of the episodes thread between prevalent social commentary and satirical comedy all while following the lives of two cousins who team up as up-and-coming rapper and manager.

The show is carried by ingenious writing, nuanced characters, and a brilliant ensemble cast. The series has also had some amazing guest appearances from Black talent like the Migos trio consisting of rappers Quavo, Offset, and Takeoff. The third season’s European setting brought the surprising appearances of Liam Neeson and Alexander Skarsgård, with Glover even revealing that Ryan Gosling was almost brought in as a guest star as well.

Before Atlanta concludes, this guide covers the characters we’ve come to love and the talented cast that portrays them, as well as where we’ll be seeing them next.

Earn is the show’s ambitious but flawed protagonist who is a Princeton dropout struggling to get his life together. While at his dead-end job of selling credit cards at an airport, he discovers that his cousin, Alfred, is a rapper that is gaining steady popularity. Only then, he seizes the opportunity to return home to Atlanta and become his manager. Earn faces the pressure of having to provide not only for himself but also for his daughter, Lottie, whom he raises with his on-and-off girlfriend, Van. Throughout the series, he’s a quiet hard worker who tries to make ends meet for his cousin and girlfriend but Earn is prone to self-destructive behavior that jeopardizes a lot of his relationships, especially the one with his parents. Despite being cynical, Earn does serve as the heart of the group while trying to redeem himself in the face of his past mistakes to make something greater with his life as a rap manager.

Donald Glover has established himself as a multi-hyphen Renaissance man due to being an actor, writer, comedian, producer, and most popularly known as singer/rapper Childish Gambino. He began his comedy career during the mid-2000s as a writer for the sitcom 30 Rock after impressing Tina Fey and producer David Miner. He was also part of a comedy sketch group called Derrick Comedy where he made appearances on their YouTube video skits. By 2009, he landed his most memorable role as Troy Barnes in the Dan Harmon comedy series Community. Glover landed some minor roles in films like The To Do List, Magic Mike XXL, and even Ridley Scott‘s The Martian. He also landed the relatively small role of Aaron Davis in the MCU movie Spider-Man: Homecoming. He also played the younger version of Lando Calrissian in the 2018 prequel film Solo: A Star Wars Story. His most recent film roles included the Coachella exhibited short film Guava Island opposite singer Rihanna, and Jon Favreau‘s remake of The Lion King where Glover voiced Simba opposite Beyoncé who voiced Nala.

Glover will next lead another TV series which is the Prime Video adaption of Mr. and Mrs. Smith co-starring Maya Erskine (Pen15). He is also set to produce and write another Prime Video series currently under the working title of “Hive”, which will reportedly focus on a pop-star figure similar to Beyoncé.

Alfred bursts onto the Atlanta scene as the up-and-coming rapper Paper Boi. His newfound popularity catches the eye of his cousin, Earn, whom he reunites with and gives him the chance to serve as his manager. Alfred complements Earn as being the confident and larger-than-life rebel whose attitude ultimately led him to this success as a rapper. However, his cousin helps in grounding him especially when Alfred finds it difficult to maintain his growing celebrity status with his delinquency that often results from his short temper. Throughout the series, he’s involved with drug deals, fights with other people, and even minor arrests that could easily threaten his rap career. Ironically though, Paper Boi’s fans find these actions as a fitting representation of Atlanta and in line with this brand of rap. Before Earn entered the picture, Alfred had his roommate, Darius, as his closest support while working on his music up till his breakout track.

A Yale graduate, Brian Tyree Henry holds a strong background in theater and Broadway having played Tybalt in a 2007 Shakespeare in the Park production of Romeo and Juliet. He also was part of the original 2011 Broadway cast of The Book of Mormon. Henry made guest appearances in TV shows like Law & Order and Boardwalk Empire until he landed his breakthrough role of Paper Boi in Atlanta. He even received an Emmy Nomination for Outstanding Supporting Actor in a Comedy Series, which led to him earning more projects. He made guest appearances in other TV shows like Vice Principals and This is Us while his movie career opened up to studio films. These included the star-studded Hotel Artemis, Steve McQueen‘s heist thriller Widows, and the horror film Child’s Play. Henry recently made his MCU debut in Chloé Zhao‘s Eternals and starred in the action comedy Bullet Train alongside Brad Pitt and Aaron Taylor Johnson.

Henry has five more upcoming projects including Causeway, an Apple TV+ film starring Jennifer Lawrence that premiered at this year’s Toronto International Film Festival. Henry will also reprise his roles in the upcoming sequels of Godzilla vs. Kong and Spider-Man: Into the Spider-Verse.

Van is a grade school science teacher who has an ambiguous on-and-off relationship with Earn. She’s the mother to their daughter, Lottie, and takes her responsibility seriously in ensuring a good life for their kid due to Earn’s inability to gain financial stability. Being a realist, Van is quite resourceful but can be passive-aggressive towards Earn. In the show, she faces some existential crises in terms of finding direction or success in her life. She also occasionally gets swept up in some of the shenanigans that Earn, Alfred, and Darius find themselves in. Drawing from Beetz’s own Afro-German background, Van presents the biracial Black experience within the show.

Zazie Beetz has built a steady repertoire of movie roles after rising to fame from Atlanta. After appearing in the film Geostorm, she played her most popular role of Domino in Deadpool 2. Beetz also starred in another comic book film, Joker, which her Atlanta costar Brian Tyree Henry also appeared in. She went on to other notable films like the indie drama Nine Days, the all-Black cast Western The Harder They Fall, and Bullet Train. Beetz has also done voice acting for the animated film The Bad Guys and the hit TV adaption of Invincible.

For future upcoming projects, she’s involved with the HBO miniseries Full Circle and will star in the film Sheltered. Beetz is also rumored to be joining the Joker sequel that Lady Gaga has recently been confirmed for.

Perhaps the most enigmatic and eccentric member of the Atlanta quartet, Darius is the stoner roommate and sidekick of Alfred who helps him in establishing his rap career. He’s often portrayed as the comic relief of the group due to his outlandish comments that are a result of his carefree and high attitude. Darius is a very supportive and loyal friend, but even his good intentions can lack the realism or foresight that is needed in certain situations. Strangely enough, he’s a gun enthusiast and finds himself in peculiar circumstances such as crossing paths with the mysterious Teddy Perkins. Regardless of the stresses in life, Darius is always ready to vibe and go along for the ride with the others.

LaKeith Stanfield has an impressive list of film projects including one of his first roles in Destin Daniel Cretton‘s indie drama Short Term 12 alongside Brie Larson (Captain Marvel). He notably played the lead roles of Cassius Green in Sorry to Bother You with Tessa Thompson (Creed), and Bill O’Neal in Judas and the Black Messiah opposite Get Out costar Daniel Kaluuya. He also has a wide range of film roles in romance movies like Someone Great and The Photograph. Stanfield also shines in darker films like Uncut Gems or big ensemble movies like Knives Out. He’s had a steady pattern of portraying smaller roles in biopic films like Selma and Straight Outta Compton. Stanfield has a few voice acting credits after appearing in BoJack Horseman and voicing the lead in the 2021 anime series Yasuke.

In terms of upcoming projects, Stanfield is set to star in the TV series adaption of the novel titled The Changeling. He’s also set to star in the 2023 Disney film Haunted Mansion and an A24 biopic based on Kwame Onwuachi‘s memoir Notes From a Young Black Chef.

Ruben Randall - July 7, 2022 0
Money
"Top Gun: Maverick" is a certifiably box office phenomenon. As of this writing, it is the highest grossing film of the year and could...