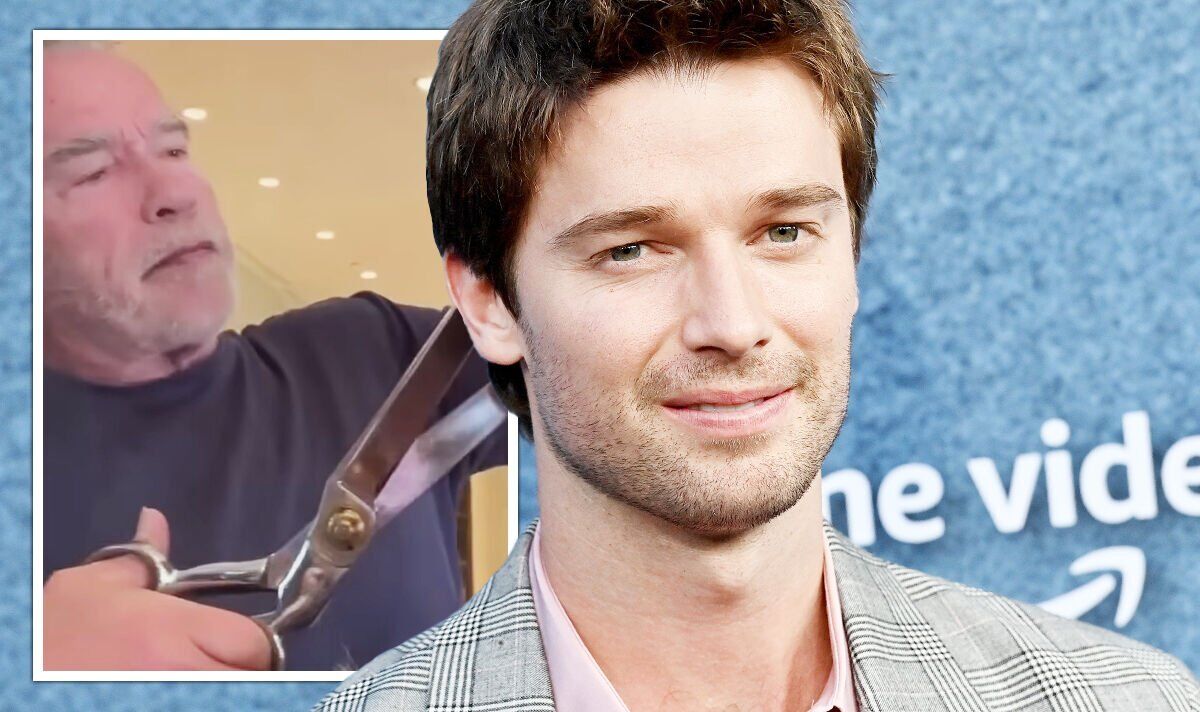 Patrick Schwarzenegger, star of Amazon Prime Video’s upcoming thriller series The Terminal List, revealed his A-lister father Arnold Schwarzenegger has been cutting his hair for most of his life. Unfortunately, things didn’t go quite according to plan during one of his more recent trims.

Hollywood star Arnold’s son Patrick was left bleeding from the head after attempting to cut his son’s hair with giant scissors.

Patrick recently posted a hilarious video of his father giving his hair a trim with extremely oversized tools on his social media.

In his appearance on Jimmy Kimmel Live, he told guest host Sean Hayes: “They’re like hedge trimmers, or something!”

“Yes he did!” Patrick then exclaimed when Sean asked if Arnold had cut his forehead.

READ MORE: Stranger Things season 4 volume 2 release time: What time is it out?

For context, the star explained: “The story is he always cut my hair growing up. Him and my mum [Maria Shriver].

“They did kind of a bowl cut, but my dad would always be the one who would shave it.

“I never used to get haircuts growing up, I still don’t. I haven’t been to a place to get a haircut in years.”

Despite years of practice, even the former Mr Universe clearly had trouble handling a pair of scissors several times the usual size.

The actor, best known for his roles in Scream Queens and the Staircase, also paid tribute to the Navy SEALs who helped him prepare for his performance in The Terminal List.

Patrick features in the main cast as Donny Mitchell and stars alongside his brother-in-law, Chris Pratt, for the first time.

“I got to train with the Navy SEALs,” he confirmed. “It was amazing.

“It was an insane experience. Chris said… ‘Hey man, I need you… if you want to get this role I need you to go and try to get into character. I need you to gain 20 pounds and go and start training.’

“It was kind of like a dream come true to get to work with them and learn from them. I have such pride in our country and the men and women in our armed forces.

“And to get to work with them and beside them in the actual show… I would say 80-90 percent of the actors in The Terminal List were real Navy SEALs. Such a cool experience.”

Next up for Patrick is another role in a major television series, this time as Golden Boy in the highly anticipated upcoming spin-off to The Boys, The Boys Presents: Varsity.

The Terminal List is available to stream on Amazon Prime Video now.

Daniel Radcliffe Discusses the Viral Photo of Him Wide-Eyed and Waving Guns: ‘It’s a...

How Old Is Snoop Dogg? His Net Worth Has Only Grown With Age

Ruben Randall - October 25, 2021 0
Celebrity
Rarely are local, national and international politics as intertwined as they will be this week for President Joe Biden. | Spencer Platt/Getty Images THE...