Nothing can keep Arnold Schwarzenegger down, according to son Joseph Baena.

The muscle-bound actor, who at just 24 years old is the youngest to ever grace the cover of Men’s Health, told Fox News Digital Schwarzenegger is “doing really well” after a frightening car accident last month that saw the “Terminator” star’s Yukon SUV roll over a Prius after striking a Porsche Cayenne in the Brentwood neighborhood of Los Angeles.

Baena’s mother, Mildred Patricia, 60, was the Schwarzenegger family’s former housekeeper. In Baena’s Men’s Health cover story, he admitted it took a while before he and the “Kindergarten Cop” became close enough to bond over their love of fitness and acting.

Despite the connection, Baena vowed in the February 2022 issue to never use his father’s last name and relayed to Fox News Digital that his own aspirations keep him from feeling pressure to live up to the legacy of the fitness culture icon.

“Well, the thing is that I have my own goals, and I’m staying my own course with my own goals, and I know exactly where I want to go and where I want to be, so I don’t really feel pressure to follow in his footsteps, per se,” Baena explained. “But, you know, I do want to make my family proud – my mom, my dad, my family and my brothers and sisters. So that means a lot to me, and family’s everything to me.”

Baena maintained that being able to follow in the footsteps of other notables who have struck poses on the cover of Men’s Health is an honor he hasn’t yet had the chance to fully internalize. 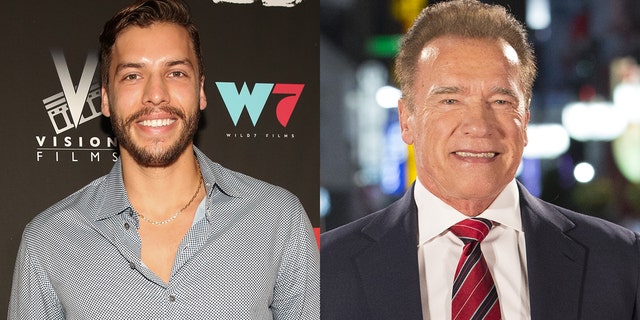 “Oh, it’s a huge, huge honor. You know, I mean, all these huge names, like Mark Wahlberg, [Dwayne] The Rock [Johnson], my father – it’s really just a big honor and privilege to be even considered as one of the covers and let alone the youngest cover in Men’s Health,” Baena said. “So, you know, I still haven’t absorbed everything. I still haven’t let it all in yet. I was just talking to my mom a little bit ago, and I was tearing up.”

Ultimately, Baena said he wants to chart his own path and make his own name while continuing to do his family proud.