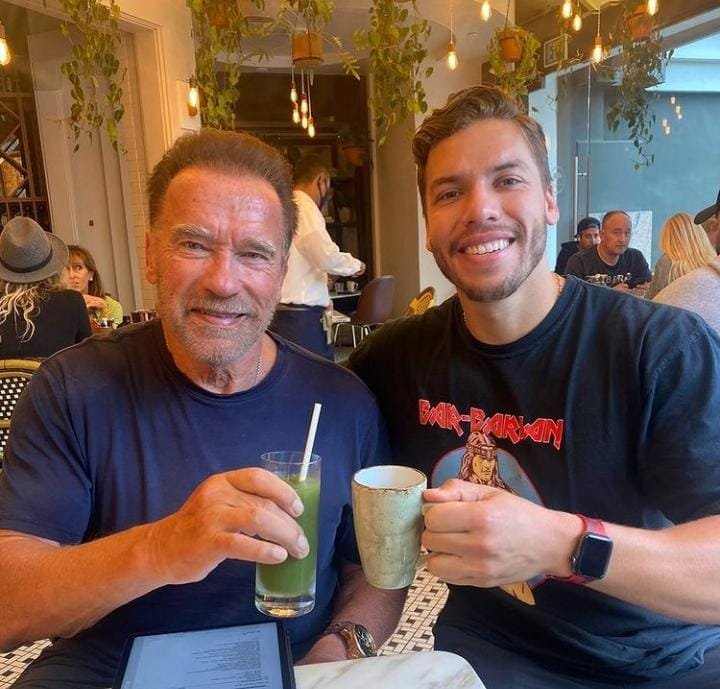 Legend Arnold Schwarzenegger made the title of Mr. Universe stand at its peak with all his achievements. Years of sweat and hard work made him achieve all the titles for bodybuilding. From attending business school to achieving the title of Mr. Olympia, a true inspiration for not just his fans but all walk of people. And, like father, like son,  Joseph Baena understands his struggles, hardwork, and follows in his footsteps for the ultimate workout.

At the age of 24, Baena looks like Arnold’s young version. While he was usually seen in workout videos, building his muscles.

A few days back, Arnold’s son Joseph was featured in Bradley Martyn’s video. Martyn is a fitness influencer who makes videos related to fitness. Meanwhile, in the video, Baena explains how his college sports team rejection made him addicted to the gym.

Baena said he was a fat kid who struggled a lot with normal activities. He said, “I was the chubby kid in my crew. It was until I joined swim my sophomore year — and I only joined swim because I didn’t make the soccer or basketball team. I got cut because I was too chubby.”

Bradley digs at Baena in the video by saying he could beat Arnold in bodybuilding. However, on this Baena made a sarcastic remark, “I don’t know man. I don’t know if you’d even beat Lou [Ferrigno] You look like Ronnie Coleman met Frank Zane.”

Bradley questioned Baena if he knew anyone who could beat Arnold. Then Baena said, “The lines are so different now. “Joe added,”The conditioning now is a lot more dry. To me, it doesn’t look like a sculpture anymore, it looks like a bodybuilder. I don’t know. It’s a tough one.”

It seems impossible to beat Arnold in bodybuilding. Also, in his documentary Pumping Iron, Arnold has shown how hard he practiced for his Bodybuilder title.

Who can beat Arnold Schwarzenegger?

Just like Arnold, Joseph loves working out and has a career in acting.  Meanwhile, taking a dig on Bradley, Baena mentioned Lou Ferrigno, Ronnie Coleman, and Frank Zane.

These big names in bodybuilding, Lou, Ronnie, and Frank, are also considered a rival of Arnold. Lou competed with Arnold for the Mr. Olympia title, but he could not beat him. However, as Arnold’s son added, no one can beat the greatest of all time. Arnold ended his bodybuilding career after winning his seventh Mr. Olympia title.

Ruben Randall - February 24, 2022 0
Actor
IE 11 is not supported. For an optimal experience visit our site on another browser.UP NEXT‘Read with Jenna’ book club discusses ‘Black Cake’...