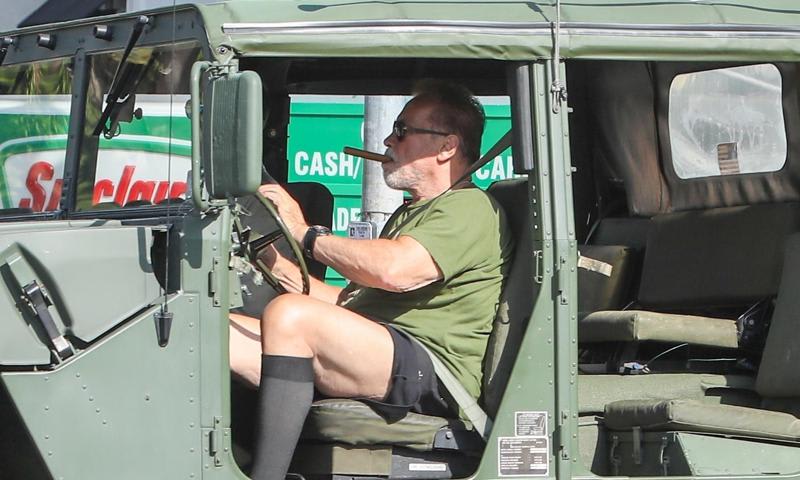 Arnold Schwarzenegger went for a smoke and a drive around town. Of course, since he’s Schwarzenegger, his smoke-and-drive sessions are a bit more impressive than expected, with him smoking a cigar and driving a vegetable-oil-powered army Hummer.

The photos show Schwarzenegger driving his truck, which has huge wheels, four seats and no doors. He was wearing a green shirt, black shorts, and compression socks, with his look matching his vehicle. He had some sunglasses on as he enjoyed his cigar.

Schwarzenegger was accompanied by a friend, who was riding on the passenger seat and was also wearing sunglasses.

Schwarzenegger has been spotted driving this car over the years, being one of his favorite vehicles.

This past week, he was spotted working out with his son, Joseph Baena. The two were at Gold’s Gym in Venice Beach, California. Out of all his kids, Baena is the one who looks the most like him, perhaps because he’s also interested in bodybuilding.

This past week, Baena dressed up as Hercules for his performance in “Dancing With The Stars,” taking on the mantle of his father, who played the iconic role in the ‘70s. “It’s a movie that I’ve watched since I was a little kid… it’s always one of my favorite characters growing up,” said Baena in an interview with Fox News Digital. “It was just funny for me to be able to portray this character also that he portrayed… we had a blast doing it and I thought it was great.”