Jersey Shore: Family Vacation alum Ronnie Ortiz-Magro and his fiancée, Saffire Matos, have been through noteworthy ups and downs throughout their romance.

Before he popped the question, Ronnie was arrested for an alleged domestic violence dispute in April 2021 and was later released on a $100,000 bond, according to his attorneys Scott E. Lemon and Leonard Levine.

However, Ronnie’s legal trouble didn’t cause a rift with Saffire. The two announced their engagement in June 2021, as Ronnie uploaded a sweet, beach-based Instagram photo. “I love you,” Ronnie captioned his post. “Thank you for sticking by my side through thick and thin! Til death do us part! #SheSaidYes.”

Although they celebrated their engagement with a huge party in October of that year, Ronnie and Saffire’s romance was “on the rocks” for a “few weeks,” an insider exclusively told In Touch that November.

“They get into fights just like normal couples would but sometimes their fights get really bad, which leads to them separating and spending time apart,” the source revealed. “Not only that but she will delete photos of him, block him, not wear her ring and so forth.”

Keep reading to see if Ronnie and Saffire are still in a relationship.

Ronnie and Saffire Were ‘Not Together’ in November 2021

It turns out, the pair weren’t just “spending time apart” — they were actually separated at the time, the insider added.

“Right now, they’re not together and sorting it out privately,” the source said. “That’s not to say it’s over for good. They both want to make it work since they have so much love for each other.”

See also  The ‘Jersey Shore’ Cast Ranked by Net Worth

Being that the eyelash technician still held her business in New York, she hadn’t “completely transitioned to L.A. full-time,” the insider explained. Although she didn’t comment on this, Saffire’s friends saw her time away from her fiancé as “a good thing” — “she can go back home to her family when she needs space and get the support she needs,” the source added.

Rumors of the couple’s split circulated when Saffire was only posting photos of herself from late October through the holiday season.

Some fans went so far as to claim the two had broken up, specifically in response to her Instagram post in December 2021, in which she shared a carousel of pictures of herself sitting in a car. “You say you belong to the streets, but the streets belong to me,” Saffire captioned her post.

As a result, several Instagram users perceived these solo snapshots reflected a breakup from Ronnie. “Bye ronnnnn,” one fan commented, while another wrote that Ron “dumped her” in a reply to a fan’s question whether the duo were still an item.

Saffire Was Still Wearing Her Engagement Ring in Photos

Despite the fact that Ronnie was not in any of Saffire’s Instagram posts at the end of the year, she was still wearing her engagement ring in multiple snaps, including the one from December 2021.

Ten days after that post, Saffire uploaded an Instagram photo on Christmas Eve, flaunting her engagement ring. This spurred fans to believe the couple were still together.

Ronnie Posted Photos of Him and Saffire in 2021

Ronnie was seemingly unbothered that Saffire didn’t include him on her Instagram page at the time. Two weeks after the duo were confirmed to be “on the rocks,” Ronnie uploaded several pictures of him and Saffire together on Instagram.

“Italy with my favorite,” the Jersey Shore star captioned his post in November 2021. He included a few romantic moments the two shared, with the first image being them sitting on a bed together, followed by snaps of them enjoying a gondola ride.

Not only that, but Ronnie added a separate post of one of their photos taken together from Italy in early December 2021, captioning the photo with multiple red heart emojis.

Ronnie and Saffire Packed on the PDA in 2022 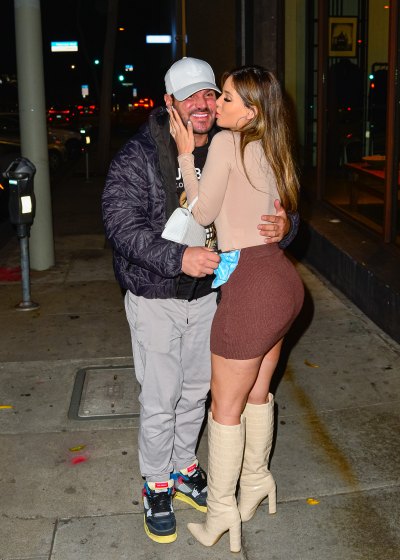 The pair were photographed together after eating dinner at West Hollywood hotspot Craig’s restaurant in January. They not only held hands as they exited the eatery, but Saffire planted a kiss on her man’s cheek.

The couple seemed to be fully reconciled and going strong by March 2022. They were spotted on a rare date night in Miami and held hands during their outing.

However, by May 2022, it seems the pair experienced another low in their relationship. After deleting all her fiancé’s photos on social media, Saffire hinted at a breakup with cryptic messages. She posted a quote on Instagram that said, “The realest woman in a man’s corner is the one he hurts the most. By the time he decides to do right by her, she doesn’t know how to love him anymore.”

Ronnie shot back with his own subliminal message that read, “A relationship where we both hustle, we both cook, we both clean, we both pay, we both spoil each other. That’s a relationship.” While the pair have yet to confirm a split, the flames also no longer follow each other.