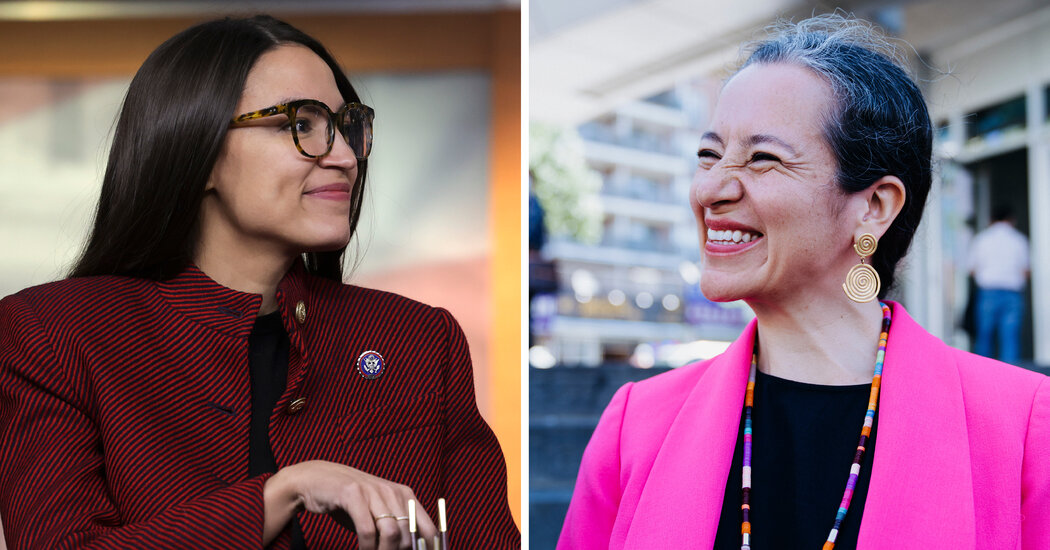 For much of her first term, Representative Alexandria Ocasio-Cortez raised her profile by fighting for nationwide initiatives favored by the far left, like Medicare for All and the Green New Deal.

But in recent months, Ms. Ocasio-Cortez, whose district includes parts of Queens and the Bronx, has shown a strong interest in more local issues, and in lifting the profile of people far closer to home.

On Wednesday, Ms. Ocasio-Cortez made her first statewide endorsement, backing Ana María Archila, an activist who is seeking to become the first Latina elected to statewide office in New York, in the contest for lieutenant governor.

Ms. Ocasio-Cortez is expected to appear at a rally for Ms. Archila on Monday, one day before the June 28 primary, and will also send out a fund-raising email. Ms. Archila’s campaign believes the endorsement will increase donors, volunteers and energize left-leaning Democrats to vote.

Ms. Ocasio-Cortez’s endorsement, which was confirmed by her spokeswoman, Lauren Hitt, may also encourage other national progressive Democratic leaders to take more interest in the contest.

“What A.O.C. represents is a constituency of young people who are so tired of the passivity of mainstream Democrats on the issues of our moment, whether it is climate, making progress on dismantling the racist structure in our legal system or standing with workers,” Ms. Archila said in an interview. “The future of the Democratic Party is this new wave and this new generation.”

See also  In Alaska, the Race to Succeed Don Young Is Raucous and Crowded

Ms. Archila, who is running in tandem with Jumaane D. Williams, the New York City public advocate, and Ms. Ocasio-Cortez have crossed paths before. In 2019, Ms. Archila was Ms. Ocasio-Cortez’s guest at the State of the Union address, after she got national attention for confronting Senator Jeff Flake of Arizona in an elevator over the nomination of Brett Kavanaugh to the Supreme Court.

Some elected officials and union leaders are worried that Gov. Kathy Hochul is running too low-key of a primary campaign, and that it could hurt the chances of Mr. Delgado, even though he has much more money than Ms. Archila.

“While the opposition might want to take advantage of a sleepy electorate that is not aware of Election Day, we want as many voters as possible to know what is at stake in this race,” said Sochie Nnaemeka, the head of the New York State Working Families Party, which has endorsed Ms. Archila.

An endorsement from Ms. Ocasio-Cortez does not guarantee victory. Last year, she endorsed Maya Wiley, a civil rights lawyer and former counsel for Mayor Bill de Blasio, in the race for mayor of New York City. Ms. Wiley came in third place in the Democratic primary.

Ms. Ocasio-Cortez also has been willing to weigh in on local controversies, recently accusing the speaker of the New York City Council, Adrienne Adams, of playing “dirty politics,” amid accusations that she eliminated discretionary funding under her control of the left-leaning members who voted against the $101 billion budget.

In May, she announced that she would be endorsing the entire slate of the New York Democratic Socialists’ candidates, as well as some backed by the progressive Working Families Party. The two left-leaning parties have occasionally been at odds with one another. This year they have aligned in support of a handful of challengers hoping to pick off long-serving incumbents in the State Legislature, in much the same way that Ms. Ocasio-Cortez herself did in 2018.

In several races young women of color are challenging long-serving male incumbents in districts whose demographics have evolved during their time in office. Others are challenging heavy hitters such as Senate energy chair Kevin Parker. Opponents claim these veterans have not been responsive enough to progressive demands.

The bulk of these challengers are looking for seats in the State Assembly, which some on the left have portrayed as an impediment to pushing a transformative agenda through the state legislature.

There are national echoes in some of these races. Jonathan Soto, a former organizer for Ms. Ocasio-Cortez running with her endorsement, is hoping to unseat Assemblyman Michael Benedetto in the East Bronx.

While campaigning to increase parental control over schools and expand access to health care, Mr. Soto has accused Mr. Benedetto of carrying water for conservatives, including the former president Donald J. Trump, who donated to him several years ago.

Mr. Benedetto, who is backed by the state’s Democratic establishment, strongly rejected these claims. In a video posted to Twitter he announced, “Benedetto a Trump supporter? Garbage!” before tossing Mr. Soto’s campaign literature into an awaiting bin.

Mr. Benedetto has echoed some conservative attacks on Ms. Ocasio-Cortez in pushing back at his opponent, whom he has sought to paint as an out-of-touch extremist.

Assemblywoman Inez E. Dickens, who is facing a challenger backed by the congresswoman, took aim at Ms. Ocasio-Cortez directly: “She needs to really think about coming into my district because I will stand up and I will push back,” she said.

Arnold Schwarzenegger ‘looks like a child’ in picture between Wilt Chamberlain and Andre the...