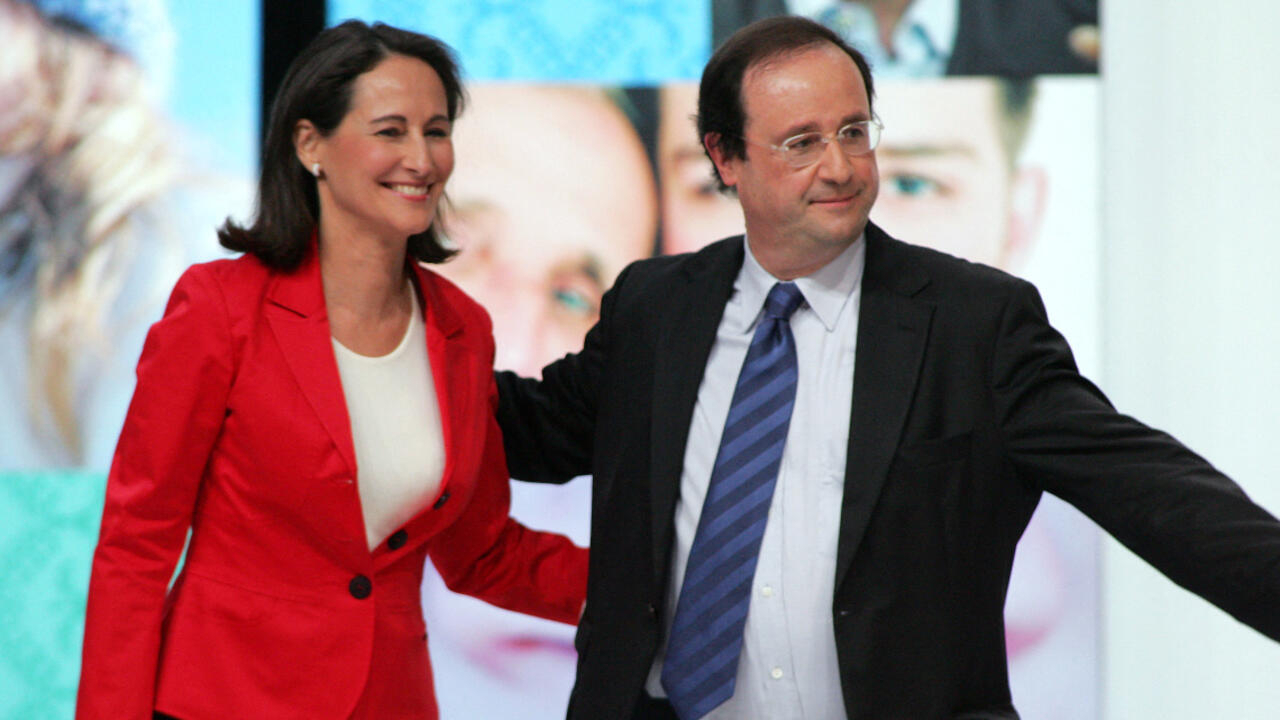 Any presidential campaign has its share of emblematic moments that change the course of the race, be they breathtaking instant tide-turners or incidents laden with meaning only in hindsight. With French voters set to elect a president in April, FRANCE 24 takes a look back at some of the emblematic moments from campaigns past. In the spotlight: Socialist Party candidate Ségolène Royal’s 2007 campaign rally, laden with offstage drama.

Just 24 days before the first round of the 2007 French presidential election, Socialist candidate Ségolène Royal took to the stage for a hotly anticipated presidential campaign rally in Limoges. The event was unusual in that, at long last, it was the first and only rally of Royal’s whirlwind 2007 campaign to see the Socialist candidate appear on stage with the head of her own party, François Hollande.

Officially, the pair had long been the ultimate power couple, their careers dovetailing at the apex of French politics for decades. But behind the scenes, the wheels had come off. Hollande would go on to win the Élysée Palace himself five years later. But Royal’s 2007 bid was doomed from the start, with the Socialist couple’s secret split the thorn in its side. In hindsight, those cringingly awkward 48 seconds of shared limelight in Limoges – all fixed grins and bumbling hesitation – spoke volumes.


The good times, after all, had been on proud display. The affable Hollande and the wallflower Royal met in 1978 as classmates at the École Nationale d’Administration, France’s top training ground for the political elite. When Socialist François Mitterrand won the French presidency in 1981, the Élysée Palace recruited the two promising young leftists as presidential advisers – Hollande on economics, Royal on social and environmental issues. Both went on to win election as lower-house lawmakers in 1988. Royal was named cabinet minister three times; Hollande would spend 11 years as party chief from 1997. The couple never married, but they had four children together. Their youngest, Flora, made her TV debut as a newborn in 1992 when Royal, then environment minister, invited a news crew to the maternity ward. By the time Royal parlayed those savvy media instincts into a presidential run 15 years later, the French public could be forgiven for believing they were privy to the family’s affairs.


From the perspective of the current presidential contest – a 2022 campaign overshadowed by war in Europe, an incumbent running against repeat candidates and a Socialist contender languishing at 2 percent in the polls – it is difficult to overstate the comparative intensity, even glamour, of the 2007 race. When the campaign began, it seemed destined to mark a changing of the guard: Conservative Jacques Chirac, pushing 75, was stepping aside after 12 years as president. A new generation, one of two Baby Boomer front-runners, was poised to take over: the energetic hardliner Nicolas Sarkozy, 52, on the political right or Royal, 53, the first woman ever to run with a serious shot at becoming France’s présidente, on the left.

Sarkozy, Chirac’s iconoclastic interior minister, had been explicit about his presidential ambitions for years. But Royal surprised even the bigwigs in her own party when she threw her hat in the ring. When told Royal was mooting a maverick bid for the 2007 Socialist nomination, former Socialist prime minister Laurent Fabius, plotting his own run, was quoted musing, “But whoever will mind the children?” (Fabius later denied the phrase, but the quote has stuck in French political lore as shorthand for the party’s dismissiveness of Royal and the era’s abiding sexism.)

But Royal, like no other Socialist on offer, struck a popular chord. In late 2006, she beat two Socialist heavyweights, Fabius and former finance minister Dominique Strauss-Kahn, to win the party primary in a landslide.

From there, she rode a wave of public fervour – dubbed “Ségomania” – to the utter bafflement of the party brass. At odds with a Socialist Party braintrust she saw as a frustrated old boys’ club, and on the outs with party chief Hollande, Royal led an innovative grassroots campaign, largely separate from the party structure, to remarkable effect. She attracted legions of new party members and coaxed fresh support from the working-class, immigrant-rich French suburbs to turn up at rallies and turn out to vote. When Royal spoke on stage, supporters would sometimes lob fresh red roses – the Socialist Party symbol – that glanced off the podium to collect at her high-heeled feet. Rockstars signed on to the cause, entertaining 40,000 Royal supporters for three hours at an open-air stadium rally on May Day in Paris.


Hollande, meanwhile, hit the trail for his party’s candidate. But he did so largely on his own, separate from the main attraction. The erstwhile power couple had secretly split. Their lack of communication spurred contradictory interviews about the candidate’s platform. “The worse it got for her, the more Ségolène Royal would tend to keeping up appearances, deliberately maintaining the lie,” L’Express magazine would report years later. “At night, a car would leave campaign headquarters for Royal’s home … most often the car was empty: the candidate had fitted herself out a hidden room, unbeknownst to her own team, on her campaign premises, where the sleepless nights dragged on.”

In the end, Royal’s campaign would prove no match for Sarkozy, a master campaigner atop a disciplined conservative party machine. In May 2007, Sarkozy beat Royal in their run-off duel, 53 to 47 percent. And once France’s 2007 election season had finally concluded, with legislative elections in June, Royal revealed she had asked Hollande to move out, free to pursue a “romantic affair” on his end. Hollande’s rumoured tryst with Paris Match journalist Valérie Trierweiler, 11 years Royal’s junior, turned out to be true.

By all accounts, the confidential split and its attendant divided loyalties had weighed awkwardly on Royal’s bid. “Never had French history, as imaginative as it is, known such a scenario,” the daily Le Monde opined after all was revealed that June. “Never had political lives been so visibly subjected to such private torments, which sent journalistic certitudes, partisan modesties [and] party supporters’ fascinations off balance.”

Sarkozy won the 2007 election handily by French standards. But the conservative’s Election Night, and indeed his first months in office, were notoriously marred by romantic intrigue, too, with his marriage to second wife Cécilia secretly on the rocks. Five months later, Sarkozy became the first French president to divorce while in office. Four months after that, he became only the second ever to marry while in the job, tying the knot with popstar Carla Bruni in February 2008.

Hollande, for his part, ended Sarkozy’s re-election hopes in 2012, winning the presidency with Trierweiler on his arm. He had beaten five Socialists, including Royal, in a 2011 party primary, after which Royal endorsed her former partner for the nomination. Burying the hatchet, Royal said at the time: “You must admit this couple’s record isn’t all that bad, with four children and two presidential candidates.” Still popular with Socialist supporters, Royal even hit the trail for Hollande in 2012, joining him onstage for an April rally. At the podium in Rennes, Hollande told a crowd of 18,000: “Ségolène Royal is here, too, as a symbol of unity, the unity that was missing in 2007, and that is here now, strong.”

Famously, the unity in Hollande’s presidential private life wouldn’t last at the Élysée Palace, either. In 2014, a glossy tabloid published paparazzi photos purportedly showing the helmeted Socialist president visiting a paramour late at night on the back of a bodyguard’s scooter – and the bodyguard allegedly returning with croissants the morning after. It was the beginning of the end of Hollande and Trierweiler, as the rumours of his affair with film star Julie Gayet eventually proved correct.

As the 2022 campaign approached, Royal applauded the rival conservative Les Républicains after Valérie Pécresse won a primary to become the party’s first-ever woman to run for president.

“It is clear that the male politicians around Valérie Pécresse were being very decent,” she told Le Parisien in December. “Something I never had: the Socialist heavyweights at the time all turned their noses up, apart from a few,” she said. Recalling the sexist remarks attributed to begrudging Socialists at the time, Royal said: “The men of my party weren’t ready. They were a lot more shaken than Les Républicains men today to see a woman ahead of them.”

She applauded the conservative nominee’s “flawless” performance before adding, pointedly, “Pécresse, for her part, has a husband who supports her. That’s a considerable asset.”

A House retirement sets off a game of musical chairs in...

How the pandemic has changed the way we travel for ever...