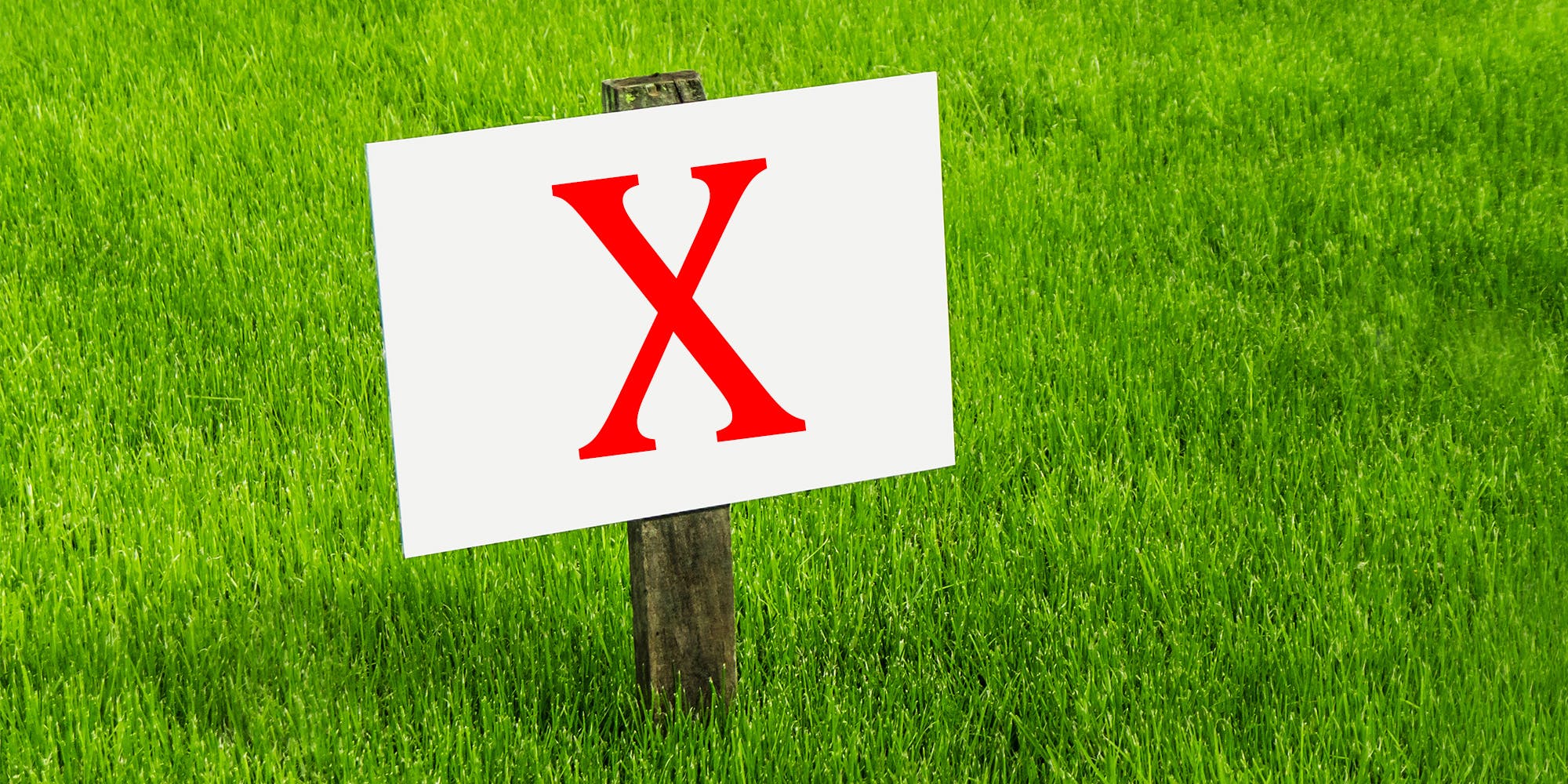 Another uses the increasingly buff Spongebob to compare the weaker “gardens when planted with monocultures” to the more powerful “gardens that mimic native ecosystems and contain an abundance of native plants.”

In yet another, a huge red X has been traced over the photo of a well-tended green lawn. “No more lawns,” it says. “Society has progressed past the need for lawns.”

@anatlfn is far from the only person to have “found anti grass memes.” Across different platforms, a seasoned movement of environmental activists and regular users is raising awareness of the various threats that classic “green carpet” lawns pose to the environment.

Their online concerns mirror a growing offline understanding of how grass lawns hurt the environment: The governments of California and Utah, for instance, are offering turf buyback programs to incentivize people to switch their lawns to less water-consuming alternatives, while smaller towns like Maryland’s College Park are rewriting their city codes to openly encourage “naturalized and native landscapes.”

Lawmakers in Nevada even passed a law banning non-essential turf in the Las Vegas region served by the Southern Nevada Water Authority.

According to a 2018 Science report, lawns are the largest irrigated nonfood crop in the United States. Kentucky bluegrass—the main variety that now populates yards across the U.S.—was first imported to America alongside livestock from Europe in the 1600s so that horses and cows could graze. In the following centuries, this perennial species of grass became a popular status symbol for the upper and middle classes.

But since this type of grass has no agricultural value, displaying a tidy, green lawn in front of one’s property essentially was solely a marker of wealth. As technologies like sprinklers and lawn mowers made this type of garden less expensive to maintain, lawns became associated with civic virtue in white, middle-class suburbs—and have stayed so to this day.

And these memetic, anti-lawn movements are attempting to show that a cornerstone of American culture isn’t worth the environmental harm.

“These grasses are foreign to our climate and habitat, and to keep them healthy we have to rely on mowers, blowers, additional water, fertilizers, herbicides, and pesticides,” grassroots organization Healthy Yards explains on its website. “Not only are these practices expensive and time-consuming, they are also detrimental to our soil, our surface water and our wildlife.”

To reach a larger audience, groups like Healthy Yards have also turned to platforms like Instagram, sharing their own memes and infographics. One of the most iconic, which is being reposted all over Twitter, shows a guy dressed as an 18th-century nobleman standing in a green lawn. “Are you still dressed like this?” the picture asks. “Then why does your yard still look like this”

And since Kentucky bluegrass turns yellow when it’s not watered, maintaining a green lawn at all times requires regular watering as well as fertilizers and pesticides, depending on the region. According to EPA estimates, maintaining green lawns requires 9 billion gallons of water a day.

Movements against “green carpet” lawns have been fighting the waste of water and dangers to native ecosystems that come with this monoculture since the mid-1900s and they have only been emboldened as climate change makes the issue more pressing than ever. In 2015, amid a particularly heavy drought in California, local politicians themselves encouraged people to “drought-shame” neighbors who wasted precious water to irrigate their grass.

Droughts continue to be a huge concern in Western and Southern states to this day: An early 2022 study found the U.S. West is in the middle of a megadrought, turning the region into the driest it has ever been in 1,200 years.

It’s only natural, then, that online creators found a community for their concerns. On May 1, Tumblr user headspace hotel posted several anti-lawn memes asking others to “steal and repost my anti-lawn memes to as many Pinterest boards and Facebook pages as possible.” The post wound up with over 104,000 notes.

On TikTok, videos tagged with #nolawns have a total of 6 million views. Most of the videos there are either posts by environmentalist creators like @eco.amical—who documents the process of removing her house’s lawn to make way for a more eco-friendly backyard—or informational explainers on why lawns are bad for the ecosystem. But that doesn’t mean the platform doesn’t host its share of memes and even a song written by @melbryantmusic, whose chorus goes “fuck your lawns, plant a garden, or better yet let your weeds get high as Willie Nelson.”

On Reddit, r/nolawns, founded in 2019, is up to 65,000 members. In it, people share photos of “alternative” lawns filled with diverse, native plants, tips on how to turn their own garden away from monocultures, and fights with neighbors or homeowners associations over unmowed yards. And plenty of memes.

“Memes and TikToks are big at spreading the word to people who may not have considered alternatives to the lawn,” one of r/nolawn’s moderators, u/TriniTornado, told the Daily Dot. “We want to ensure the content quality is high, but we also don’t want to exclude interest from people who are just opening their eyes to the fact that the lawn is not an ecological norm.”

His interest in the topic came from personal experience.

“I bought a property with a manicured lawn and garden and used to sit outside and wonder why I never saw any birds or butterflies. It sparked an interest in native plants and pollinator gardens,” he said. Soon, he started asking, “Why do we find it normal that we need to re-seed and add herbicides and pesticides every year to maintain a lawn, when there are so many plants that actually want to be in your yard without needing any inputs?”

Many anti-lawn activists are particularly concerned with the fate of pollinators, a category that includes bees, butterflies, moths, beetles, wasps, and other small animals. Pollinators are fundamental to every ecosystem: Of the 1,400 crop plants that produce our food and plant-based industrial products, almost 80% require pollination by animals. And, according to several studies, they thrive in lawns that aren’t clean-cut and tidy.

According to u/TriniTornado, there are larger societal complaints, too. “The lawn began as a symbol of being so rich that you don’t need to use all your land to grow food. And as people fall behind financially, they get fined by the city for growing tomatoes in their front yard or leaving some violets for the pollinators.”

He’s referring to the fact that homeowners associations, first founded with the unwritten goal of keeping Black Americans from suburban neighborhoods, are still well-known for policing—and fining—people for not maintaining a neat lawn. Last year, a 72-year-old immigrant from Bangladesh was openly shamed by a judge for failing to tend to his yard while he was undergoing cancer treatment.

“If I could give you jail time on this I would. That is totally inappropriate,” the judge told him.

As inequality continues to skyrocket in the United States, well-tended yards are turning back into the symbol of wealth they were historically set up to be and inspiring a movement against them.

The creator of a viral anti-grass meme, @theexxiledduck, underlined the political goals behind these pictures.

“I am fully aware that my memes somehow find a way to the average suburban liberal or conservative who doesn’t see an issue with their lawn,” they said to the Daily Dot. “And I generally do interact with them, trying to say ‘hey look, if you plant some native species you can bring back some pollinators in your area.’ It’s not much, but it is something that suburbanites have some control over. The next step really is addressing the homeowners associations and how they enforce monocultural invasive grass lawns.”

Under his meme—a picture of an average suburban lawn with no native plants, reading “mfs be like why are the bees and butterflies dying / my brother in christ, your lawn looks like this”—plenty of people are posting pictures of their progress in turning their lawn into something other than a monoculture.

“We just ordered some white clover and ground ivy seeds for our lawn, and over the weekend we planted some creeping phlox and other ground cover and flowering bushes! Biodiversity is the way to go!” a user replied.

It’s a movement that, cultivated online, is actually starting to grow.

Read more of the Daily Dot’s tech and politics coverage

Are These the Richest Celebs Who Own Private Jets? Let’s Look at Their Net...

OnePlus 11 5G Launch Date Confirmed And It’s Sooner Than You...