The Catholic priest and brother of McPartlin’s presenting partner Declan Donnelly died on in hospital Friday following a short illness.

TV star McPartlin, 46, wrote on Twitter: “Fr Dermott you were the kindest, wisest man I knew. Rest in peace my friend. You will never be forgotten.

“My thoughts, prayers and love are with your wonderful family.

“The world has lost a special man. X A.”

The diocese of Hexham and Newcastle were the first to announce the news of Fr Dermott’s death on Friday afternoon, with Declan, 46, paying tribute to his late brother shortly after.

He wrote on Twitter: “I am heartbroken to tell you that my darling brother Fr Dermott, @TweeterPriest, sadly passed away this afternoon.

“We are all beyond devastated.

“Thank you for your messages of sympathy and support, they are appreciated DD.”

In 2015, Fr Dermott officiated at the wedding of his brother to Ali Astall in Newcastle in a star-studded ceremony.

A statement from Hexham and Newcastle diocese said: “It is with great sadness that we have to inform you of the death of Fr Dermott Donnelly, who died peacefully this afternoon in hospital.

“This has come as a great shock to all of us.

“Please pray for the repose of his soul and keep his family, especially his mother, in your prayers at this difficult time.”

Fr Dermott recently celebrated his 30th anniversary of service to his parish and community, where he was best known for his work with young people and youth ministry.

He was a member of the clergy for St Joseph’s Church in Stanley, County Durham.

Hexham and Newcastle Bishop Robert Byrne said “he will be sorely missed for his energy, enthusiasm and ability to engage with all who met him”. 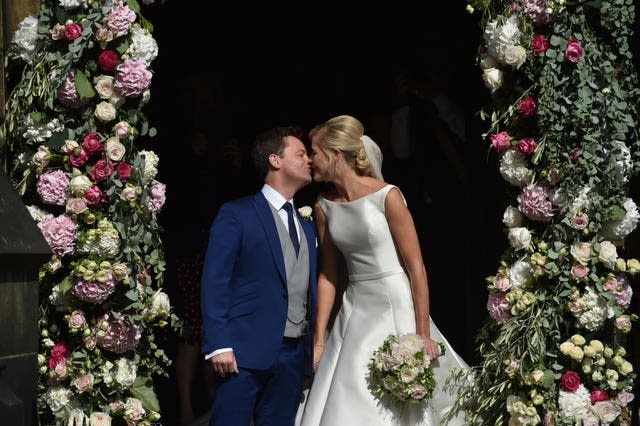 He added: “This is particularly true in his work with young people and youth ministry in the diocese, bringing many disadvantaged and dispirited young people to Christ.

“He truly lived his faith, and in doing so gave so much to others.

“It is with great gratitude that we will remember him and all he selflessly gave.”

Bishop Robert noted that as Fr Dermott was born and bred within the Hexham and Newcastle diocese he, and his extended family, were well known to the local community.

He added: “Our prayers and condolences should go out to those who will be grieving so strongly at this moment.”

Stanley, Dipton & Byermoor Catholic Parishes also shared the news and asked for parishioners to “pray for the repose of his soul”.

The group announced on Thursday that Fr Dermott was “extremely unwell” in hospital and had requested prayers for him.

A similar message was posted on the Facebook page of Pontop Partnership, a group of 10 Catholic parishes in the diocese of Hexham and Newcastle.

Following the news of his death, those who had known him and worked with him shared an outpouring of fond tributes to social media.

During his career, Fr Dermott was a supporter of charity The Catholic Agency for Overseas Development (Cafod), the official aid agency of the Catholic Church in England and Wales.

Cafod’s head of education Monica Conmee paid tribute to Fr Dermott on behalf of the charity, saying: “We are hugely saddened to hear of the death of Fr Dermott Donnelly, a great friend of Cafod who witnessed a burning passion and commitment to the fullness of life for all.

“Fr Dermott chose to stand in the light, and through his immense talent and gifts, so generously guided thousands of young people to experience the love and light of God in their own lives, inspiring them to share this with others.

“Unforgettable mountain-top moments for so many young Catholics were the Flame events at Wembley Arena, of which Dermott was a guiding light and a driving force.

“We are hugely privileged to have worked closely with Fr Dermott enabling the voices of the poor and most vulnerable to be heard.

“May the angels come to greet one of their own.”

In 2014, Fr Dermott featured on Songs Of Praise alongside CBBC’s Hacker T Dog to answer questions about the church that CBBC viewers had sent in.

St Joseph’s Church in Stanley will be holding a gathering at 6pm on July 8 to pray for Fr Dermott.

Ruben Randall - March 30, 2022 0
Money
A new backlash storm is brewing for Dave Chappelle as it has been revealed he is set to host four new comedy specials for...