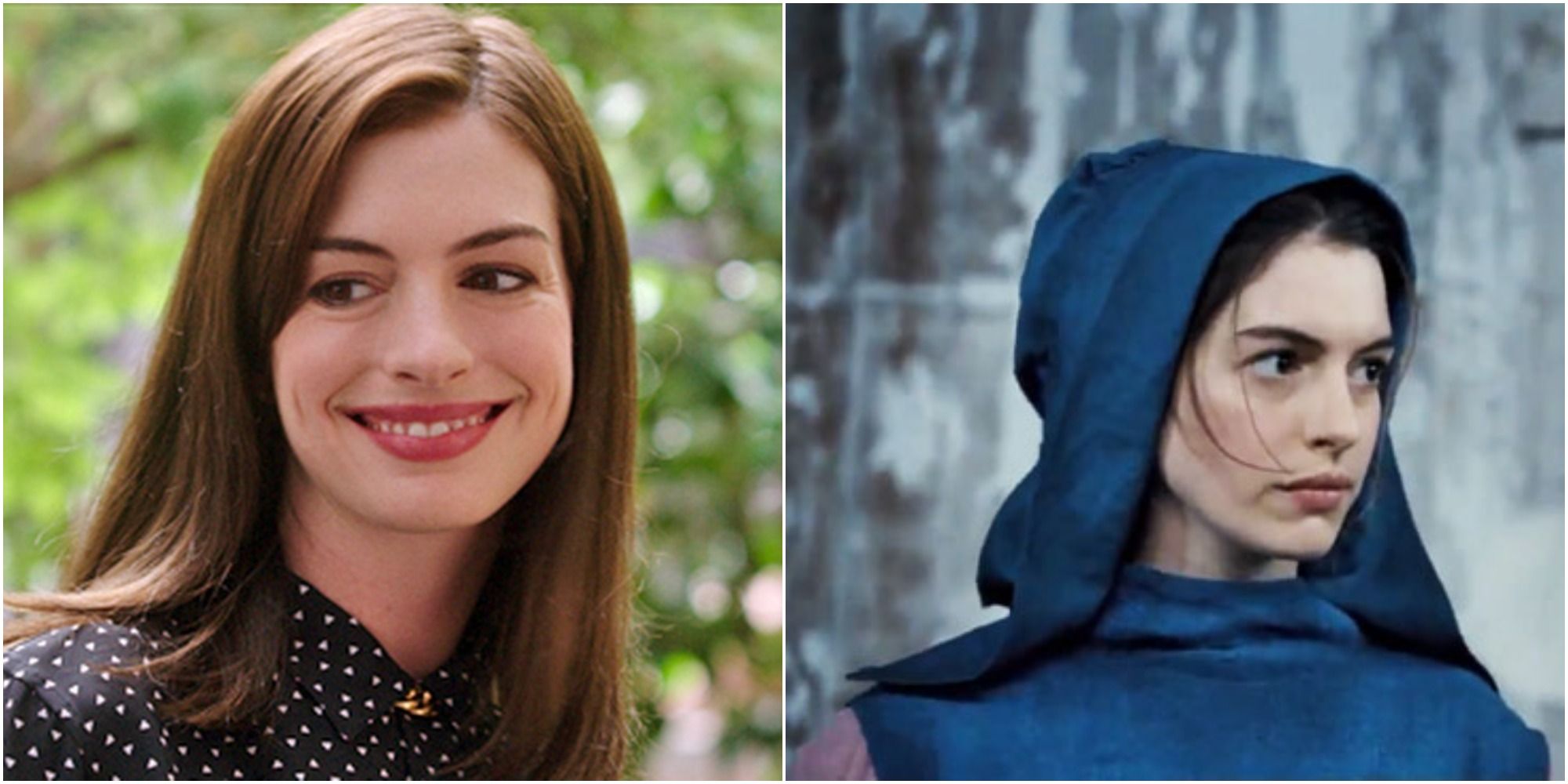 Anne Hathaway is best remembered for her breakthrough role as Mia Thermopolis, Princess of Genovia, in Disney’s 2001 film Princess Diaries and its 2004 sequel. Shortly after her venture with Disney, Hathaway was cast in films with more mature topics, like Brokeback Mountain and The Devil Wears Prada.

RELATED: Catwoman: 10 Things About Selina Kyle That Are Unique To The 2004 Film

Since her breakthrough role, she has become one of Hollywood’s highest-paid actresses, with her films grossing almost $7 billion. While Princess Diaries didn’t make the cut for the highest-rated films including Hathaway, there are plenty of other movies she stars in worthy of checking out, especially her Oscar-winning performance for Les Misérables.

Becoming Jane is a 2007 biographical film about Jane Austen’s early life and her long-time love interest, Thomas Langlois Lefroy. Hathaway stars in the lead role as Jane Austen opposite James McAvoy (known for his role as Professor Charles Xavier in X-Men: First Class).

The beloved Maggie Smith and Julie Walters also appear in minor roles in the film. Becoming Jane was created from various facts the production team discovered about Austen’s life and is recommended for fans of the period drama genre.

9 One Day Stars Two Friends Who Reunite Every Year On The Same Date – 7.0

One Day is a 2011 romantic drama based on David Nicholls’ 2009 novel with the same title. The film stars Hathaway opposite Jim Sturgess as Emma Morley and Dexter Mayhew respectively. One Day opens with two friends named Emma and Dexter at their college graduation from the University of Edinburgh on July 15, 1988. The two friends mutually agree to meet each other every year on the same date. Through their many reunions, they experience a tumultuous relationship and many personal issues, like struggling careers and family problems.

The Intern is a 2015 comedy-drama written, directed, and produced by Nancy Meyers, best known for the Father of the Bride films. The film stars Robert De Niro and Hathaway in lead roles as Ben Whitaker and Jules Ostin respectively. Ben is a 70-year-old intern at an online fashion website founded by Jules called About The Fit. He begins a romantic relationship with the company’s massage therapist and reminds Jules about her love for About The Fit. The film received mixed reviews from critics and placed second at the box office behind Hotel Transylvania 2.

The Cat Returns is a Studio Ghibli animated spin-off of the 1995 animated film Whispers of the Heart. The film follows a young girl named Haru Yoshioka, who has the mysterious power of understanding cat language. After she saves a cat named Lune from an oncoming truck, he offers his hand in marriage as the Prince of the Cat Kingdom. Hathaway voices the English dub of Haru, who accepts Lune’s marriage proposal and begins to display cat features, like paws and a tail. However, Haru leaves the cat kingdom after unexpected problems from the Cat King.

RELATED: 10 Movies To Watch If You Like Pride & Prejudice

5 Dark Waters Is About Robert Billot’s Legal Battle With DuPont – 7.6

Dark Waters is a 2016 legal thriller directed by Todd Haynes. The film is a dramatized retelling of the Robert Billott case regarding DuPont’s chemical contamination of a West Virginia town. Dark Waters stars Hathaway as Sarah Barlage Billott, Robert’s wife, and Mark Ruffalo portrays Robert. The film also features appearances by Victor Garber and Tim Robbins. The real-life Robert spent two decades in court with DuPont and even won over 3500 cases due to the contamination, which were settled for a total of $671 million.

4 Hathaway Won An Oscar For Her Role In Les Misérables – 7.6

The 2012 film adaptation of Victor Hugo’s novel Les Misérables, later adapted into a Broadway musical, received widespread praise from critics, particularly regarding Hathaway’s Oscar-winning performance as Fantine and Hugh Jackman’s role as Jean Valjean. Jackman’s range in the film, vocal, and character-wise, was another affirmation of how great of an actor he is.

While Hathaway only briefly appears in the film, she makes a huge impression on viewers for her stellar acting abilities and heart-shattering musical performances, especially during the song “I Dreamed a Dream.” One of the only critiques about Les Misérables is Russell Crowe’s average singing abilities.

Brokeback Mountain was directed by Ang Lee and based on Annie Proulx’s 1997 short story with the same title. Hathaway appears alongside Heath Ledger and Jake Gyllenhaal as Lureen Newsome Twist, the wife of Jake Gyllenhaal’s character. During auditions, she was filming for Princess Diaries 2 and showed up during her lunch break. That is when she told a little white lie about her abilities.

“When I left the audition, the last thing Ang said was, ‘Oh, by the way, can you ride a horse?’ My parents have given me a lot of gifts in my life, and one of them is: If you’re ever asked if you can do anything, say yes. You can learn anything in two weeks if you’re motivated enough. So I’d never been on a horse, and I replied, ‘Oh yeah, I’m a really good rider. So I knew I had to learn to ride, and I got really, really, really good,” stated Hathaway in an interview with Out.

The Dark Knight Rises is the final installment in Christopher Nolan’s The Dark Knight trilogy and is a sequel to the 2008 film The Dark Knight. Christian Bale reprises his role as Bruce Wayne / Batman, and Hathaway stars as Selina Kyle / Catwoman, which she diligently prepared physically for by taking martial arts classes.

The highest-rated film Anne Hathaway film on IMDb is Nolan’s 2014 sci-fi film Interstellar. The film is set in the dystopian era of 2067, and society struggles with the threat of lack of fruitful crops and dust storms. Interstellar stars Matthew McConaughey as Joseph Cooper, an ex-NASA pilot who is now a farmer. Hathaway stars as Dr. Amelia Brand, a NASA scientist and astronaut who works with her father to ensure survival. Interstellar won the Academy Award for Best Visual Effects, along with various additional nominations.

NEXT: 10 Sci Fi Movies That Will Give You An Existential Crisis

Cassidy Stephenson is a reader, writer, and video game enthusiast. She now works as a Gaming Lists and TV/Movie Feature writer for Comic Book Resources. In her free time, she loves watching movies, listening to music, and pulling 5-stars on Genshin Impact. Follow her on Twitter for more shenanigans @Cassidy_Lee18 You can also contact her at [email protected]

The Wanted and More Honor Tom Parker After Singer’s Death

“I used to shoot my pacifier in the sink”: Ben Simmons...

Ruben Randall - September 2, 2022 0
Money
Former Sixers guard Ben Simmons hilariously agrees to have started dribbling even before walking.  It won’t be wrong to say that Ben Simmons is gearing...