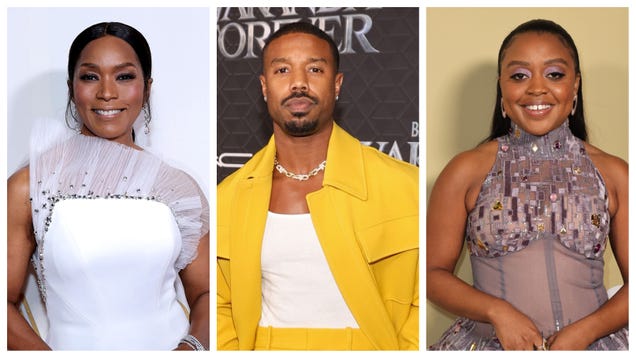 The 5th annual Critic’s Choice Association’s Celebration of Black Cinema and Television has announced its honorees. Hosted by Bill Bellamy, this year’s ceremony is set to take place on Monday, Dec. 5 in Los Angeles and will boast a handful of Hollywood’s biggest and brightest stars in recognition of their talents and contributions to the industry.

“The Celebration of Black Cinema & Television has grown tremendously over the last five years,” said CCA CEO Joey Berlin, per Deadline. “We’re thrilled to be able to recognize such outstanding projects across both film and television, and to honor these incredible actors and filmmakers for their work

You know we always love to big up our faves on this side of the internet, so without further ado, let’s get iiiiiiiit!

Black Panther: Wakanda Forever star Angela Bassett will be getting honored with Career Achievement Award for her role in the highly anticipated sequel.

Music icon and Motown Records founder Berry Gordy will receive the Icon Award for his “unparalleled contribution to music, film and popular culture.”

Journal for Jordan and Creed star Michael B. Jordan will be awarded with the Melvin Van Peebles Trailblazer Award for his “overall contribution to the industry” and in celebration of his directorial debut, Creed III, expected to hit theaters on March 3, 2023.

Lovecraft Country and The Harder They Fall star Jonathan Majors will be honored with the Actor Award for Film for his upcoming role in the aerial war epic Devotion.

Abbott Elementary creator and star Quinta Brunson will be getting recognized with the Actress Award for Television for her role as Janine Teagues on the hit, Emmy-winning, ABC series.

Atlanta and Marvel’s Eternals star Brian Tyree Henry will be receiving the award for Supporting Actor in a film for his role in the upcoming Apple Original and A24 film, Causeway, starring opposite Jennifer Lawrence.

The Woman King director Gina Prince-Bythewood will be recognized with the Director Award for Film for the Viola Davis-led film released earlier this summer.

Rapper Kid Cudi will be honored with the Groundbreaker Award for his starring role in the animated Netflix project Entergalactic.

P-Valley star Nicco Annan will be getting recognized for the Actor Award for Television for his role as Uncle Clifford on the popular STARZ series.

The Harder They Fall star Danielle Deadwyler will be awarded for her role as Mamie Till in the Chinonye Chukwu-directed film, Till, with the Actress Award for Film.

Actor Quincy Isaiah will be recognized with the Rising Star Award for his role as Magic Johnson in the HBO series, Winning Time: The Rise of the Lakers Dynasty.

Nikyatu Jusu will be honored with the Breakthrough Film Award for her Sundance-winning, psychological thriller, Nanny, starring Anna Diop and Sinqua Walls.

Comedian Ayo Edebiri will be awarded the Rising Star Award, presented by IMDbPro for her role on the popular FX series, The Bear.

The cast of the ABC hit show, The Wonder Years, will be getting recognized with the Ensemble Award for their contributions to the show.

The 2022 Critics Choice Association Celebration of Black Cinema and Television goes down Monday, Dec. 5 and is set to be televised nationwide on Nexstar stations in February in honor of Black History Month.

More from The Root

See also  Doctor Strange 2: Here Are 2 Strange Issues You Don't Know Yet About the Movie

Ruben Randall - September 19, 2022 0
Money
Alicia Keys is one of the most successful and well-known R&B singers in the world. She has released multiple platinum-selling albums and has won...