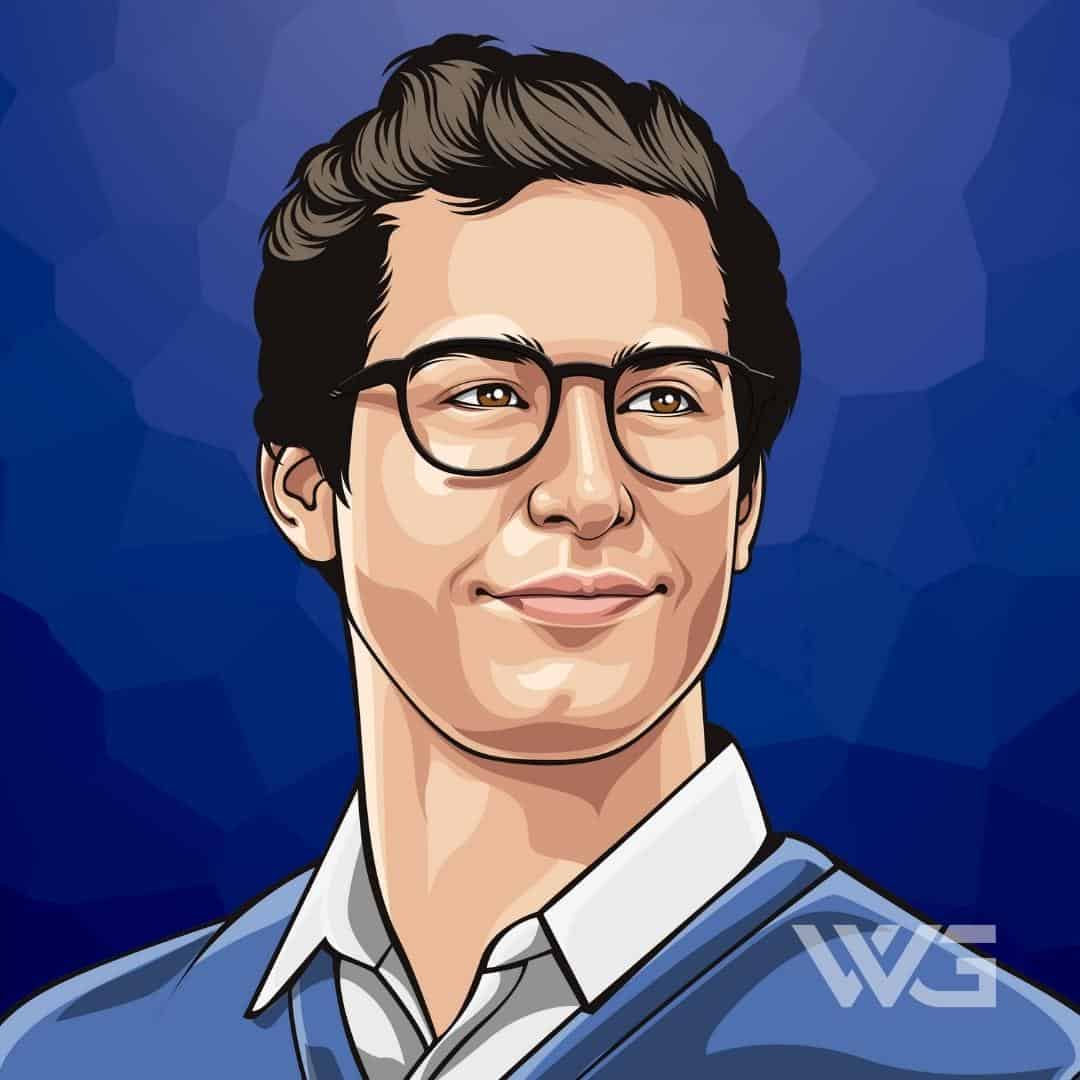 Andy Samberg is an American actor, comedian, writer, producer, and musician from California. Samberg is a member of the comedy group ‘The Lonely Island’ and was a cast member on ‘Saturday Night Live’.

He has starred in multiple films such as ‘Hot Rod’, ‘I Love You, Man’, ‘Jesse Forever’, and ‘Hotel Transylvania’.

Andy Samberg was born on the 18th of August, 1978, in Berkeley, California.

His mother, Marjorie Isabel is a school teacher and his father Joe is a photographer.

Samberg discovered that his mother Marjorie, who was adopted, is the biological daughter of a Sicilian father (Salvatore Maida) who immigrated in 1925, and a German Jewish refugee mother (Ellen Philipsborn), who had come to the U.S. in 1938.

After the video sharing platform YouTube was launched, some of their “digital shorts”, such as ‘White Power’, ‘Regarding Andy’, and ‘Awesometown’, became very popular on the internet.

He worked as an assistant on the sitcom ‘Spin City’ at the meantime. In 2005, they were offered an audition for ‘SNL’, following which Andy Samberg was selected as a featured player while his two friends joined as writers.

Initially, he was offered less live performances, and appeared in prerecorded sketches, with some of their digital shorts being featured on ‘SNL’.

The Lonely Island’s growing fame helped them bag the movie ‘Hot Rod’ in 2007. Samberg and Taccone starred in the film, while Schaffer acted as the director. Two years later, they released their debut album, ‘Incredibad’, which was well received by critics.

Today, he stars in the popular TV drama series: “Brooklyn Nine-Nine”, alongside stars such as Terry Crews, Joe Lo Truglio, and more.

Here are some of the best highlights of Andy Samberg’s career:

“It’s crazy. Since there have been men and women, there have been funny women… f**king idiot-ass men keep saying that women aren’t funny. It makes me crazy. I find it disgusting and offensive every time.” – Andy Samberg

“I’m a tearless clown. If I were to get a tattoo, it would be the two masks, and they would be both smiling.” – Andy Samberg

“I’m a comedian, and I decided I wanted to be a comedian when I was eight years old watching old Saturday Night Live episodes. I never decided to be a rapper because I’m not a rapper.” – Andy Samberg

“My mom let me kind of run free and be rowdy. She encouraged it. I’m the youngest child. So I was spazzy and trying to be funny to my older sisters. It’s kind of my role in the family – tension reliever. I was funny or annoying, depending on your perspective.” – Andy Samberg

3 Lessons from Andy Samberg and from The Lonely Island

Now that you know all about Andy Samberg’s net worth, and how he achieved success; let’s take a look at some of the strongest lessons we can learn from him and his band The Lonely Band:

1. You’re Never Too Old For Anything

Anyone who knows the name Michael Bolton probably knows him for his world famous love songs back in the day.

This is the man responsible for “When a Man Loves a Woman” and dozens upon dozens of other soulful love songs. And, now in his early 60’s, this same man is the featured singer of the hit Lonely Island song, “Jack Sparrow.”

If that isn’t proof that you can do and be anything you want to be no matter what age you are, then I just don’t know what is.

2. Being Cool is All About Confidence

If you’ve seen the members of The Lonely Island, then you already know that their oddly attractive persona has very little to do with the way they dress. The hyper-masculine attitude of The Dudes is all about confidence and self-respect, no matter what their clothes or behavior would otherwise indicate.

3. Throwing Things On the Ground is Funny in Almost Every Situation

If you’ve read any of my other Lifehack posts, then you may have noticed that I’m a big fan of exercising your inner child and not taking your life too seriously.

That’s just one of the many reasons that I’m such a huge Lonely Island fan. As their video and song for “Threw It On The Ground” shows, you can throw just about ANYTHING on the ground and it will be funny to someone.

How much is Andy Samberg worth?

Andy Samberg’s net worth is estimated to be $25 Million.

How old is Andy Samberg?

How tall is Andy Samberg?

What do you think about Andy Samberg’s net worth? Leave a comment below.

Steven Spielberg’s Net Worth (2022): How Much He Made From Jurassic Park, Schindler’s List,...

Mike Tyson reacts to US comedian admitting he spent time with...

Ruben Randall - December 28, 2022 0
Money
On his podcast Hotboxin with Mike Tyson, the former heavyweight champion of the world interviews a wide range of guests. On a… On his podcast...

What Teams Has Mitch Trubisky Played For, And What Is His...