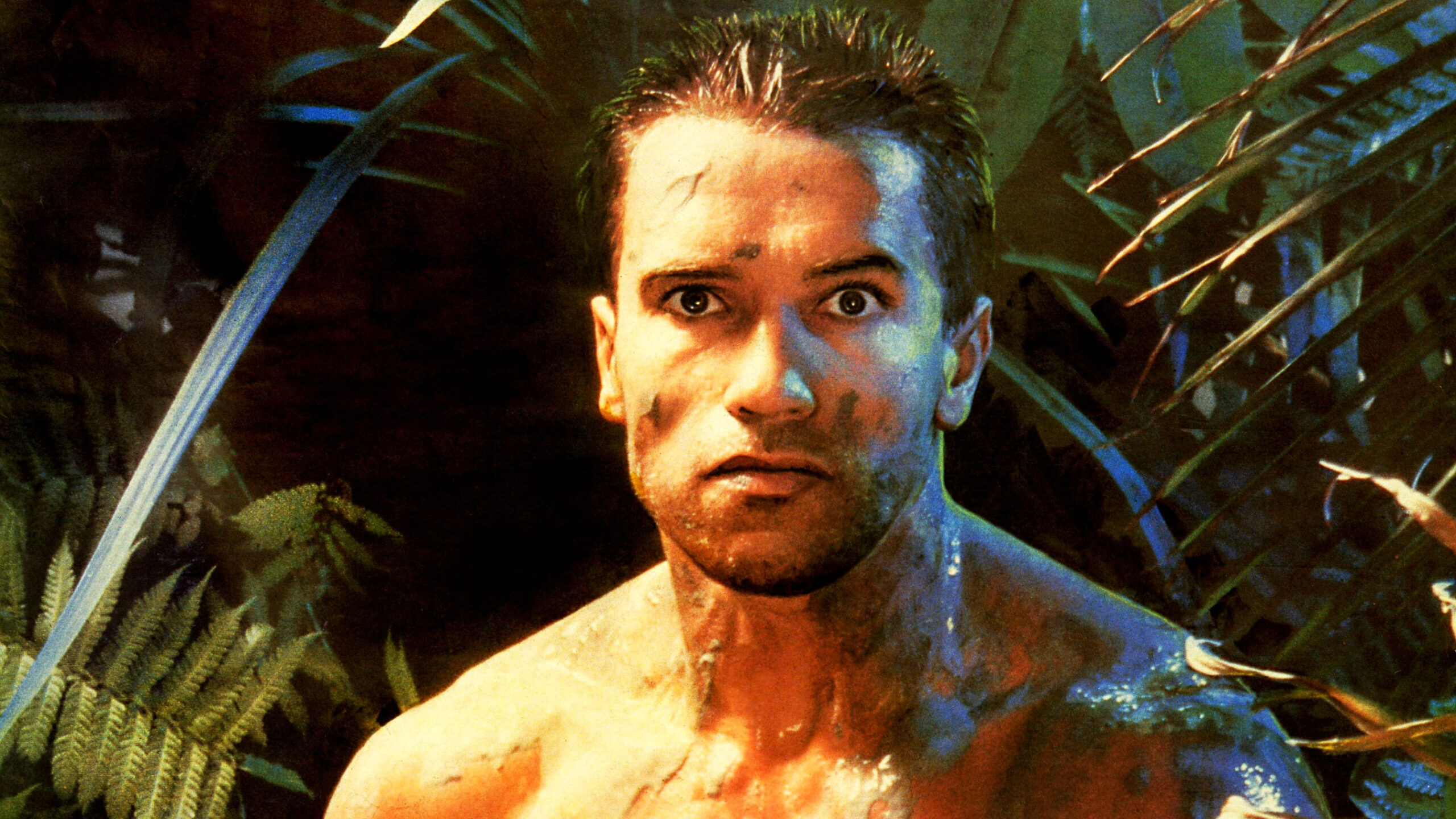 By Michileen Martin
| 1 day ago

If you wanted to make a bloody, fun, hilarious science fiction satire in the ’80s or ’90s, there was one director to turn to — Paul Verhoeven. The criminally underrated director not only brought us 1997’s Starship Troopers, but a decade earlier Verhoeven directed RoboCop. In between, Verhoeven teamed up with action superstar Arnold Schwarzenegger to make a science fiction action romp unlike any other — 1990’s Total Recall. The flick is currently streaming on Netflix, but — for those watching in the U.S. — the film will leave the streamer in less than a week.

Douglas Quaid is living a charmed life. On Earth in the late 21st century, Quaid is a construction worker with a knockout, loving wife (Sharon Stone). By the look of his home, he gets paid a pretty penny for his work, and of course since he’s played by Arnold Schwarzenegger, he’s built like a Sherman tank. But something is missing, and Quaid thinks he’s figured it out when he sees an ad for Rekall — a company that implants memories of vacations into their clients’ minds. In spite of warnings from his wife and his co-worker Harry (Robert Costanzo), Quaid goes to Rekall and orders a vacation to Mars filled with intrigue, adventure, and even a tryst with another woman. But before the procedure to implant the memories even begins, a new personality emerges from Quaid and attacks the scientists. 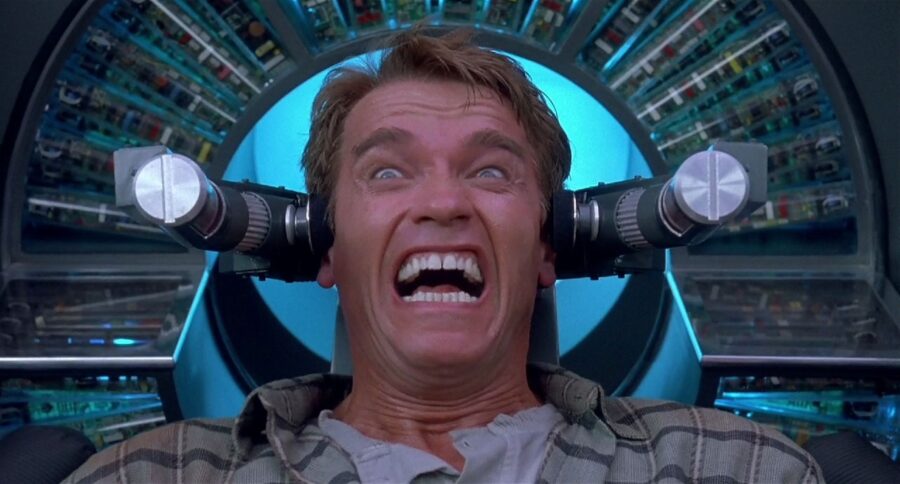 We soon learn Quaid’s life is filled with undercover operatives from the clandestine “Agency,” all assigned to keep the Arnold Schwarzenegger hero’s cover in place and to erase him should his memories surface. While Quaid doesn’t remember his former life as Agent Carl Hauser, he’s led by secret breadcrumbs he’d apparently left himself in case of emergency to a recording of himself, as Hauser, who tells Quaid to “Get your ass to Mars.” What follows is a strange adventure into the red planet’s seedy underbelly as Quaid contacts the Mars mutant underground and continues to be hunted by the Agency, led by the absolutely ruthless Cohaagen (Ronny Cox). To say more would be to give you way too many spoilers. Suffice to say, you never know exactly who you can trust in Total Recall, or what’s really going on.

Total Recall was the kind of hit that is far too rare for Arnold Schwarzenegger — not only was it a financial success, but a critical one as well. It wound up being the second highest grossing film in the summer of 1990, falling only behind the classic fantasy romance Ghost. Elevated by Verhoeven’s too often ignored satire, Total Recall did much better with critics than many of the actor’s post-Terminator 80’s work like Red Heat, The Running Man, and Commando. In fact, with an 82% score on Rotten Tomatoes, Total Recall has the third highest critic rating of all of Schwarzenegger’s feature films, and the fourth highest rating with audiences.

More than just an example of Arnold Schwarzenegger’s career or Paul Verhoeven’s directorial talent, Total Recall survives as yet one more example of just how much Hollywood owes the late science fiction author Philip K. Dick. The film is based on Dick’s 1966 short story We Can Remember it For You Wholesale. A growing list of films such as Blade Runner, A Scanner Darkly, Minority Report, and The Adjustment Bureau are based on Dick’s stories and novels, as well as the series Man in the High Castle. 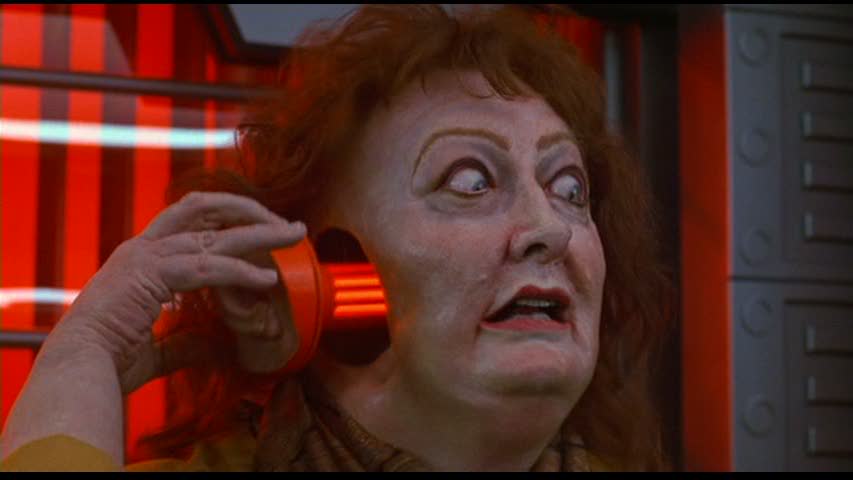 These days, considering what digital manipulation has made possible, the special effects of Total Recall may seem laughable to some. But in 1990, many of the film’s visual feats were absolutely cutting edge. Moments like Arnold Schwarzenegger painfully removing a homing beacon from his skull through his nose, or when the hero emerges from a suit making him appear to be a red-haired woman, were the kinds of things no one had ever seen before on screen. And, of course, who could forget Johnny Cab?

The science fiction elements of Total Recall also felt more real than what audiences were used to in Star Wars and Star Trek. Arnold Schwarzenegger getting pawned memories by a greedy salesman? Or annoyed by an animatronic cab driver? That was an easier future to see than one filled Vulcans and laser sword duels (though, to be fair, Star Wars is supposed to be take place a “long time ago” but you get the point).

Total Recall is more than worth watching if you’ve never seen it. And if you have seen it? Well, see it again. The film leaves Netflix next Tuesday, March 1.

Ruben Randall - February 13, 2022 0
Celebrity
A special election will be held on Tuesday, Feb. 15, in the 49th Assembly District to fill the seat vacated by Assemblymember Ed...

Daniel Dae Kim Said Dying ‘so Many Times on Screen’ Was...