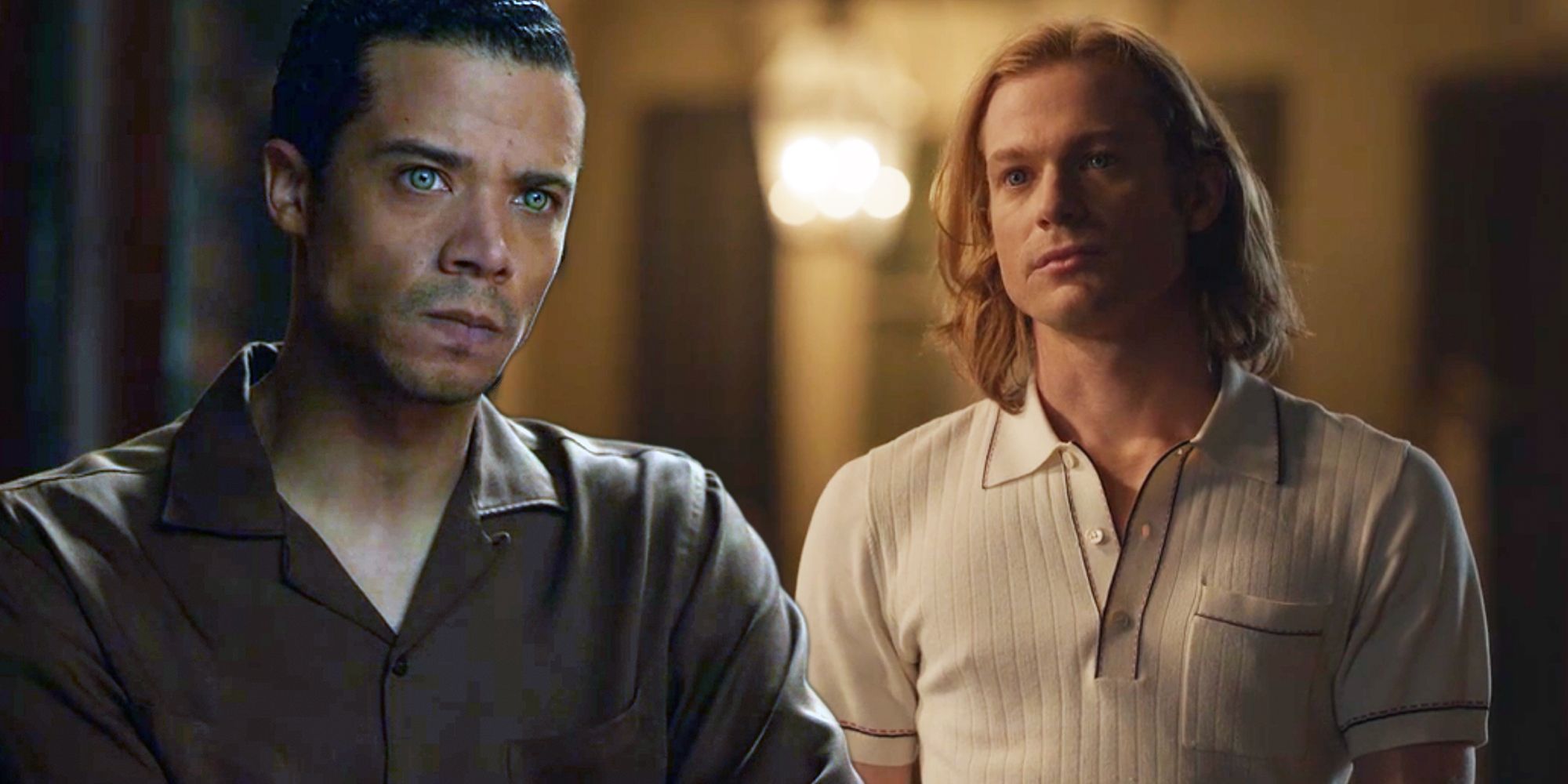 Warning: SPOILERS for Interview with the Vampire episode 6.The finale of AMC’s Interview with the Vampire season 1 is just around the corner, after an exciting episode 6 continued to affirm the vampire Lestat’s fascination with, and hold on, Louis de Pointe du Lac. Another point of focus in episode 6 was Lestat’s apparent musical talent, as it was revealed that the vampire has written songs for his lovers on numerous occasions. The episode even features a song Lestat wrote for Louis called “Come to Me”, which is sung in full by Lestat actor Sam Reid on the show’s soundtrack.

“Come to Me” was written by Daniel Hart, who has also composed all the music for Interview with the Vampire. A classically-trained violinist, Hart cut his teeth as a performing artist, touring with groups such as The Polyphonic Spree and St. Vincent, in addition to his own bands The Physics of Meaning and Dark Rooms. Hart has worked on a wide range of films and television shows as well; his credits include The Green Knight, The Society, and The Old Man & the Gun.

Related: 10 Best Movies & TV Shows About Vampires, According To Ranker

Hart spoke with Screen Rant about the rich musical tapestry of Interview with the Vampire, and what it was like to write a song from Lestat’s point of view.

Daniel Hart On Interview With A Vampire

Screen Rant: You’re a classically-trained violinist. Are you playing on this score?

Daniel Hart: Yes, I think it’s about 60% an orchestra in Vienna that we recorded, and then the rest of the time, if there are strings, it’s me.

Cool. Any string focus feels so natural for this score and the tone of the show. Was part of the draw of working on Interview with the Vampire the idea that you could kind of lean into your classical background?

Daniel Hart: I said yes to the job because the showrunner Rolin Jones asked me. I’ll do just about anything he asks me to do, forever. I don’t care what kind of music he wants; I’ll make it. I think he’s like one of the best people to work for. [One of the] best people I’ve ever worked for, anyway.

The musical tone of this show is so varied, because you have some stuff that’s period appropriate, and then you have some very dark, almost Gothic kind of stuff, and there are plenty of modern-day scenes. How did you land on the different tones for the different time periods of the show?

Daniel Hart: We talked about it quite a bit ahead of time. Rolin had some musical… he shared with me a little, like, palette library of stuff that he was interested in. And then I had some stuff of my own that I was interested in, given the subject matter, but also the ways in which they’ve changed certain things from the books to more reflect the kind of storytelling that involves race. That’s not necessarily Anne Rice’s original intention, but seems like stuff that she was totally on board for, considering she was consulted for the show. And so, there was this desire to have the music in some ways reflect the music of New Orleans in 1910, and especially African American contributions to that music.

Even in the last episode that aired, there are two versions of a song that Lestat wrote for Louie called “Come to Me”. One of the versions is one that he recorded for Louis to try and win him back. This one plays in the episode first, and it’s his lover Antoinette singing the main vocal line. Then, there’s a version where Lestat is singing the vocal that was supposedly recorded years later. For the version that we did with Antoinette’s, we made it like a spare chamber ensemble arrangement, but then the version where Lestat records the vocalist himself, we did it with a full orchestra. We wanted them to feel different from each other, but also because we thought like, “If Lestat is doing it, then of course he’s going to do it with a full orchestra. He’s so full of himself.” So I feel like, in that sense, the characters also help to dictate the kinds of stylistic choices that we were making, as well as the period in which they live.

You’ve played with bands and you’ve worked with bands, so I’m sure you’ve written many, many songs, but have you written from the perspective of a character like that before in your composing work?

Daniel Hart: The film that I finished last year with my longtime collaborator David Lowery is called The Green Knight, and I wrote four or five songs for that film. It’s a medieval fantasy film, so [I did] lots of research into Middle English and musical styles of the time and instrumentation of the time. So, writing songs from other perspectives and in other styles than I would choose for myself if I were writing my own songs is something that I had basically just finished doing right before I started on Interview with the Vampire. It didn’t feel like much of a stretch to me.

But I think within my own songwriting, writing stuff for my band, or co-writing stuff for other people, I like a diversity of styles. I like listening to lots of different kinds of music, and I’ve played lots of different kinds of music in the various bands that I’ve been in over the years, so I’m always looking for opportunities to do something different. Do something that doesn’t feel like me. Try out something new. I mean, it always ends up sounding like me. I can’t get away from myself, but I like trying to stretch away a little bit.

Have you been following the social media buzz around the song at all? I’ve seen people calling Sam Reid “Vampire Frank Sinatra”.

Daniel Hart: I get tagged quite a lot on social media; when people are talking about the music, anyway. I’ve read a lot of what people are saying. Because the books have such an intense following, it would make sense that if the show was good that people would have intense feelings about it as well, but I didn’t really think about it when we were working on it. I didn’t think about how much people would probably like or hate this, depending on how many boxes are checked for super Anne Rice fans. To that end, the ones that I hear from anyway… like, nobody’s reaching out to tell me that I’m terrible. So, I’m really happy that it seems like people who care a lot about these stories are really into this version that we’ve made.

I think the response to the song that Sam sang is the most gratifying thing for me, because he doesn’t consider himself to be a singer. I think he was a little apprehensive about putting that recording out into the world. I think it sounds amazing. I think his voice sounds like a singer’s voice, and [that it’s] quite powerful performance. So yes. Very gratifying to see people loving it on social media.

That song is on the soundtrack, which just came out a couple of weeks ago. Do you have a favorite track from the album, or something where the writing process particularly sticks out to you, or where the scene felt really special?

Daniel Hart: I do have a favorite track from the album. There’s a track on there called “Vicious”. In the show, it plays at the end of episode 5 when Lestat violently attacks Louis and pulls him up into the air and drops him. It’s one of my favorite scenes in the show, and it’s quite a long piece, relatively speaking. It’s almost six minutes, whereas I think most of the music written for this show, and for a lot of television shows, is like one to three minutes long.

It gave me a chance to really develop something and expand it, and the way that the orchestra performed it, it sounds so good. They really captured something in Vienna. I was just really happy with the piece of music, when it showed up as I was watching the scene and as it sort of started revealing itself as I was plucking things out on the piano. It felt to me like I’ve really unlocked something related to the show and to the characters. I listen to that one. I don’t always listen to the stuff that I work on. But I’ll listen to that one. I like listening to it.

Next: Blade’s Production Delay Hints It’s A Big Part Of The MCU’s Future

The finale of Interview with the Vampire season 1 airs November 13 on AMC at 10 pm ET, and the soundtrack is available on digital platforms now.