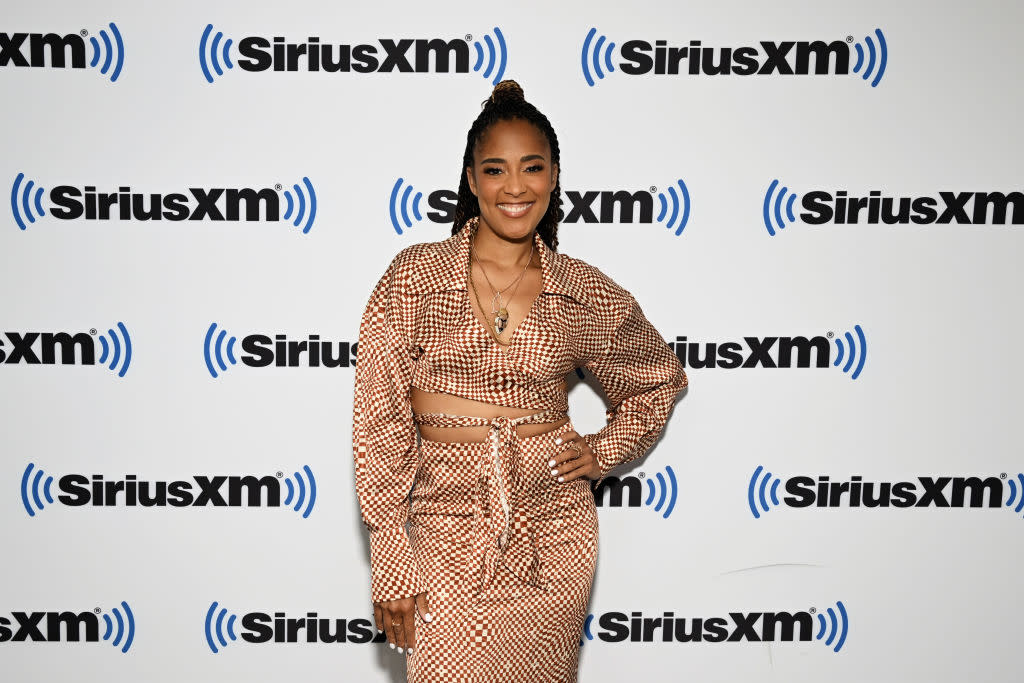 If there’s one thing we can count on Amanda Seales to do…it’s to keep it all the way real. The Smart, Funny and Black founder is busier than ever with a podcast, a new radio show, television projects in the works, and a brand new comedy tour: The Black Outside Again Tour. It’s Seales’ first major standup tour since her HBO comedy special I Be Knowin’, and as always, she blends funny with Black history and a cultural experience fans of hers know cannot be found anywhere else.

Seales has had quite the few years, having recently bid adieu to her role as Tiffany DuBois in HBO’s Insecure after the series came to a close following five successful seasons. She was also heavily featured in the Showtime docuseries Everything’s Gonna Be All White as a contributing historian of race relations in America. Formerly known as Amanda the Diva, she is a living and breathing text on all things Black.

While she has her share of critics, she’s learned to block out the noise. And more recently, she admits she notices a change in the way people react to her, and thankfully it’s on a more positive and critical thinking capacity, which is why much of Black Twitter came to her defense when she was axed out of a tribute montage of the finale episode of The Real. Fans recall Seales exiting the daytime talk show after a six-month stint citing claims of censorship and lack of diversity on an executive level coupled with toxicity in the workplace.

Shadow and Act spoke with Seales about everything she has on her plate, lessons she’s learned along the way, and so much more.

Seales is funny, witty and more importantly, brilliant. Attending one of her comedy shows exposes her multifaceted persona. For those who haven’t had the chance to see her live, or even catch a clip, she says be prepared for the unprecedented.

“I would say that comedy is like a TED talk with jokes,” she told us. “You can get knowledge because my company is Smart, Funny, and Black – but it’s also going to be very witty. I’m a very physical comic, so I definitely use my body. But at the end of the day, it’s some smart s**t. If you come in for fart jokes, this ain’t that. You’re going to get a sprinkle of dick jokes because you can be smart and talk about it. But at the end of the day, I want this comedy to be I want my comedy to be an extension of Dick Gregory, an extension of Paul Mooney, an extension of George Carlin – that’s where my shit sits. But then when you add in the Black woman element of it, it’s a whole other vibe.”

The interdisciplinary studies major from SUNY didn’t begin her career in comedy. Of course, she started off as a child actress. But she revealed in a recent interview with The Breakfast Club that her first job out of college was as a radio host at Sirius XM, and it wasn’t intentional. Ironically, Seales was fired following a professional disagreement. But she’s back with Hart’s network.

In addition to that, Seales has her comedy work, her Small Doses podcast, paid content she provides on The Amanda Verse, and now the radio show. But listeners and viewers will get something different from every platform

Small Doses has been going on for like four years. It’s me by myself and I’m basically talking about just different topics that relate to our existence and how to navigate this world and this life in the healthiest way possible,” she explained. “And then the Amanda Verse is basically a universe of Amanda. It’s a Patreon page…I’m in a new space where Insecure has ended and it’s time to forge a new path. I’m really just embracing this independent artist space. And the building of that in a real way requires the support of the people. It’s a space for folks who are true Amanda Seales fans to subscribe for $5 to contribute to me continuing to make free content and in that space. And then last but not least, is my show on Channel 6 on Sirius Satellite Radio. It’s every Monday at 10 a.m Eastern, 7 a.m. Pacific. And you can also listen wherever podcasts are posted. And I have my co-hosts and every episode we talk about the news that’s going on in the world through a Black lens. And then we have a guest and we always talk about it with our guests. We always talk about just their time in school…”

Being part of the cultural phenomenon of ‘Insecure’ had its ups and downs for Seales, but in all, she takes away the positives

Social media users have come up with their own narratives about Seales’ experience on the show. She hasn’t said much in detail about it, but she does say that for her, it is also about how the experience helped her grow. She prefers to focus on the good and lessons learned.

“As a creative, I’m not somebody who thrives as a struggling, as a starving artist. Some people do like the grind of it, it makes them produce better. I’m not that person – capitalism sucks. So like the quest of it gets in the way of my creativity. So Insecure allowed me to not have to think about that and allowed me to create my web series, Get Your Life. It allowed me to become really immersed in my stand-up and create I Be Knowin’. And it allowed me to create Small Doses and to write the whole book,” she says. “That to me is a very positive part of that right way to play…I feel like a lot of times folks romanticize things to be what they wanted to be. But even for everybody who’s watching this and works at a job, you got to find the perspective of the silver lining of things and also just the understanding of what you’re doing.”

Seales didn’t mince words regarding not being mentioned in the finale of The Real. Some of her colleagues came to her defense. Bailon Houghton and Mai Jenkins hopped on an Instagram live to let the world know they are part of the Amanda Verse and were not in agreeance with the way producers handled the ordeal. For Seales, it was a moment of validation. She’s long been viewed by some critics as problematic.

“It was really nice to talk with Adrienne and Jeanie publicly also because that’s the other thing – I get a lot of love privately, OK? I get a lot of texts and DMs. But I think folks know that I am, I really stand on 10 toes about a lot of things that they may not necessarily want to have on their head or have on a back by association,” she explained.

Watch the full interview above.