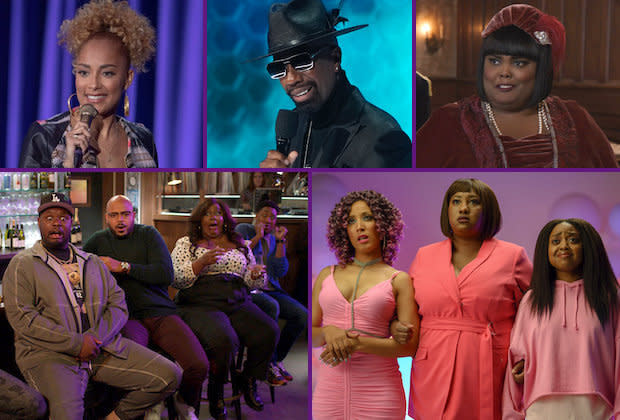 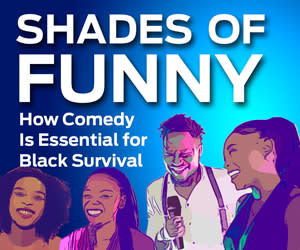 “Black people tend to be very funny during very dark times. It’s, like, in our DNA,” Nicole Byer of NBC’s Grand Crew shares during TVLine’s Shades of Funny roundtable video.

And modern times have seldom been as dark as these first years of the pandemic, and evvvvvverything else that has transpired within.

“We are very resilient people,” attests Gina Yashere of CBS’ Bob Hearts Abishola. “We’ve gone through a lot of cruelty and a lot of hardships, and it didn’t break us. Music and humor have been our way of coping and passing on messages — and still creating happiness.”

“Comedy is a defense mechanism, a survival technique,” says W. Kumau Bell (who directed Showtime’s We Need to Talk About Cosby). And that survival technique is often best displayed by the Black comedians who perform stand-up. As J.B. Smoove (Prime Video’s Phat Tuesdays, HBO’s Curb Your Enthusiasm) puts it, “Comedians being honest, they can relate to you and they make it funny. We’re therapists on stage, but we’re also the patient laying on the couch.”

Many of those comedians/creators also open up about specific instances when humor helped them overcome a tough time.

“We’re in the middle of a pandemic and we’re also dealing with institutionalized racism,” notes Jackson. “I was able to funnel a lot of the frustration, a lot of what I desire out of my friendships, a lot of the things that were helping me get by, and a lot of things I wanted to see into [Grand Crew].”

Closing out the lively discussion, we invited everyone to talk about the Black comedians whom they consider to be trailblazers. Press play above to hear praises be sung for Jackie “Moms” Mabley, Richard Pryor, Wanda Sykes, Katt Williams, Issa Rae, Chris Rock, Key & Peele and others.

But wait, there’s more! In the video below, Seales, Pinnock and others cheer Black Twitter and the other positives of social media. (Video interviews conducted by Mekeisha Madden Toby, Keisha Hatchett, Ryan Schwarz and Andy Swift)

Olivia Cooke Is Scared to Reveal Anything About ‘House of the...