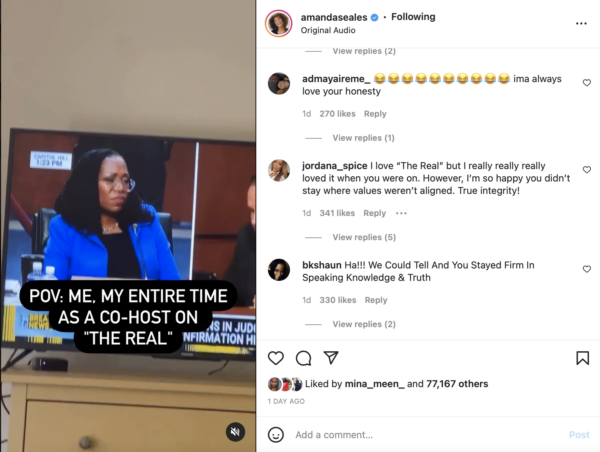 Amanda Seales still appears to be affected by her experience with and subsequent departure from the daytime Emmy Award-winning television talk show “The Real.”

As the nation watched the Supreme Court confirmation hearings of federal judge Ketanji Brown Jackson–the attorney set to become the first Black woman to sit on the U.S. Supreme Court–many critics have taken to their social media platforms where they’ve spoken out on the racist undertones in the treatment of the Miami native by the Republican party.

Folks on social media suggested the “Insecure” actress was not quite over her abrupt exit from the show, with many suggesting that the 40-year-old move on from the incident, including one Instagram user who wrote, “She need to hang it up.” Another person commented, “it’s been almost 2 years give it sista gir.” A third person wrote, “See this why I didn’t like her on the show. So bitter.”

However, Seales received plenty of support from fans who believed the star was more significant than the show. One fan wrote, “Talk yo sh-t Amanda! They assumed her light skin would instantly mean comply comply…sis brought the sauce to the show in her short time and I loved it! She’s toooo black for some, even our own skin folk.”

Another supporter echoed a similar sentiment, “No shade—they weren’t ready for a Columbia-educated, African American Studies MA on ‘The Real.’ That person added, “I would’ve been over it too, Amanda!”

“I love ‘The Real’ but I really really really loved it when you were on. However, I’m so happy you didn’t stay where values weren’t aligned. True integrity!” added another.

The actress served as a guest co-host on the series several times in 2019, before becoming a permanent co-host in January 2020. She joined fellow comedians Loni Love, Jeannie Mai, Tamera Mowry-Housley and Adrienne Houghton. However, later that August, she announced that she would not be renewing her contract after only six months on the show. The actress said, “My contract is up at The Real, and I didn’t renew it.”

Alicia Keys Net Worth Life, Career Highlights & Everything We Know...