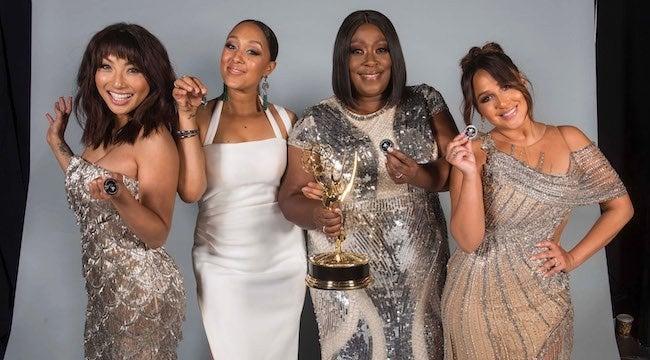 The Real is over. After 8 seasons and 1,360 episodes, the hosts – Loni Love, Jeannie Mai, Garcelle Beauvais, and Adrienne Bailon – bid adieu in an emotional finale episode on Friday, June 3. During the episode, the women reflected on their top moments, favorite memories, and the impact the two-time Emmy award-winning series made in daytime television history. Since its debut in 2013, the show has been praised for its diverse hosts and for targeting millennials with their subject matter. In the finale episode, Love directed the viewing audience to a montage featuring highlights from their time on-air, including all of the previous co-hosts Tamar Braxton and Tamera Mowry Housley. But one co-host who was missing from the tribute was Amanda Seales.

The Insecure star was a guest co-host on the show for several episodes before being hired full-time. She replaced Braxton in the fifth co-hosting chair a few years after Braxton was fired from the show in 2016. Seales – a well-known cultural critic and expert in African American culture and studies – brought her well-thought-out viewpoints on race and social matters to the show. But she admitted to some pushback from producers regarding the content she discussed. Some fans also felt she was too real for the show, which didn’t have a serious undertone before her joining.

After just six months, Seales quit, citing censorship. She revealed during an Instagram live chat after her exit in 2020: “I didn’t renew it, because it doesn’t feel good to my soul to be at a place where I can not, speak to my people the way they need to be spoken to. And where the people that are speaking to me in despairing ways are not being handled…I’m not at a space where as a full black woman I can have my voice and my co-workers also have their voices and where the people at the top are not respecting the necessity for black voices to be at the top too.”

Ruben Randall - August 12, 2022 0
Money
Hollywood star Ryan Reynolds has talked about the moment he told wife Blake Lively he had bought Wrexham Football Club – and she...