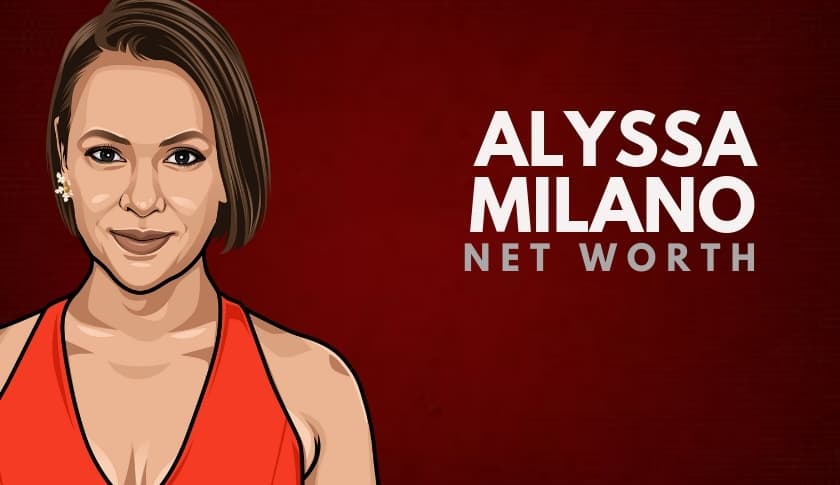 What is Alyssa Milano’s net worth?

Net Worth:$10 MillionAge:48Born:December 19, 1972Country of Origin:United States of AmericaSource of Wealth:Professional ActressLast Updated:2021

Alyssa Milano is an American actress, author, and singer.

Alyssa Jayne Milano was born on the 19th of December, 1972, in Brooklyn, New York.

Her parents are Lin Milano and Thomas M. Milano. Their family is of Italian descent, and she was raised Roman Catholic. She has a younger brother.

When she was 7 years old, her babysitter took her to an audition for a national touring company of ‘Annie.’ She made it through the auditions. While she was in the play, Milano and her brother traveled to the United States with the touring company. After their return to New York, Milano appeared in various television commercials.

Milano rose to fame when she landed the role on the sitcom ‘Who’s the Boss?’.  She starred on the show for eight seasons until its end in 1992. This role established her as a household name and teen idol and opened up the opportunity for her to take on many more roles.

When she was 12 years old, she co-starred alongside Arnold Schwarzenegger in ‘Commando.’ On stage, she starred in ‘Tender Offer,’ ‘All Night Long,’ and ‘Butterflies Are Free.’

After a Japanese producer saw her, she was offered a five-album record deal. She ended up only releasing four studio albums: ‘Look in My Heart,’ ‘Alyssa,’ ‘Locked Inside a Dream,’ and ‘Do You See Me?’.

From 1995 to 1998, Milano starred in seasons 5-7 of ‘Melrose Place.’ After leaving the series, she joined the cast of ‘Charmed’ as the character Phoebe Halliwell. The show ran for 8 seasons until 2006. On top of her television work, Milano has appeared in films like ‘My Girlfriend’s Boyfriend’ and Hall Pass.’

How Does Alyssa Milano Spend Her Money?

Milano owns a beautiful home in Bell Canyon, California. She purchased the home in 2001 for $1.595 million. It comes with five bedrooms and 5.5 bathrooms. She also owns a condo in Los Angeles.

Here are some of the best highlights of Alyssa Milano’s career:

“Animals, they are one of the most beautiful gifts we have and, you know, if there are people that have compassion, there are very few people that put their money into animal rescue organizations. And if there is someone that has that passion, animals need all the help they can get.” – Alyssa Milano

“It’s with a heavy heart that I have decided that I can’t relocate. I have two babies under 4. being a mother and wife comes first, and I can not uproot my children and separate the family by moving away. I will miss this job desperately and wish everyone the absolute best.” – Alyssa Milano

“The beautiful thing about baseball is that anything can happen. It’s like life in that way. As soon as you think you have it all figured out, something happens that makes you realize – you know nothing.” – Alyssa Milano

“After the oil spill, I had this strong feeling that if I ever were to be blessed in having children, I never wanted my kids to see me pumping gas at a gas station.” – Alyssa Milano

“Aaron Spelling always had his finger on the pulse of pop culture, he knew what the public wanted to see. He was one of the most loyal men in this business and believed in me at a time in my career when no one else would.” – Alyssa Milano

“I love Dexter. I love Top Chef. Can’t wait for it to come back. I love Friday Night Lights. I think TV is in a great place right now. It’s definitely getting better and better. I think there is some of the most complete writing for women and female characters, they’re done in television production and not really film production.” – Alyssa Milano

Now that you know all about Alyssa Milano’s net worth and how she achieved success; let’s take a look at some of the lessons we can learn from her:

It’s nice to be important, but it’s important always to be nice.

Animals are one of the most beautiful gifts we have, and, you know, if there are people who have compassion, there are very few people who put their money into animal rescue organizations. And if there is someone that has that passion, animals need all the help they can get.

Alyssa Milano is an American actress, producer, and singer who became a household name in the 1980s with her role on ‘Who’s the Boss?’.

She appeared in many television movies in the 1990s and starred in the television series ‘Charmed.’ Other notable roles of hers include ‘Romantically Challenged’ and the film ‘Hall Pass.’

What do you think about Alyssa Milano’s net worth? Leave a comment below.

Ruben Randall - September 11, 2022 0
Money
Drake flexes Nike's star-studded cast at special awards show in Oregon. With weeks to go before the start of the NBA season, players all around...