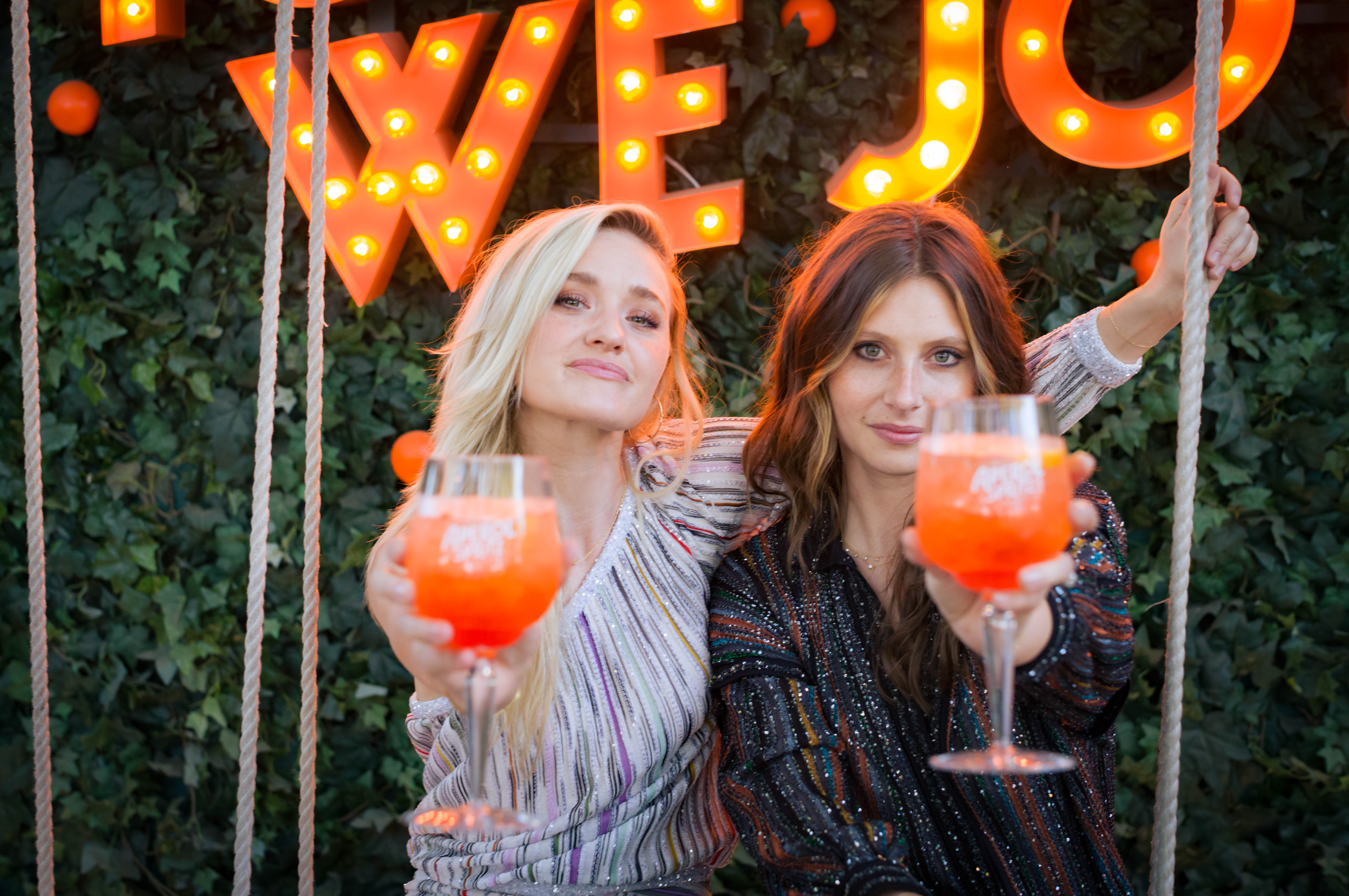 If you purchase an independently reviewed product or service through a link on our website, Rolling Stone may receive an affiliate commission.

It’s an exciting festival summer for Aly & AJ. The two are finally getting out and into the sun again after two years of ups and downs, everything from pandemic isolation, to rescheduled tours and family health scares. But the sisters are not only making appearances at a series of the season’s hottest concerts, they’re teaming up with the Italian aperitivo to spread the joy of being together once again with Aperol.

That’s not to say that Aly and AJ Michalka, performing as the duo Aly & AJ, have just been sitting back and sipping spritzes. Last year, they put out first studio album since Insomniac in 2007, the warm and breezy A Touch of the Beat Gets You Up on Your Feet Gets You Out and Then Into the Sun (which was mostly written in 2019, but had been delayed). The two even witnessed the resurgence of their nostalgic power anthem “Potential Breakup Song” on TikTok, and followed it up with an explicit version for now-grown fans of the original.

The two recently performed at BottleRock in Napa Valley, as well as Governor’s Ball in New York City, and will close out their summer by getting on stage at SEA.HEAR.NOW. in Asbury Park, NJ. Nearly 15 years after they came onto the scene as teenagers under Disney’s label, they need no reintroduction. Their fans are ready to rock out to everything old and new, and perhaps share an Aperol Spritz with them along the way. 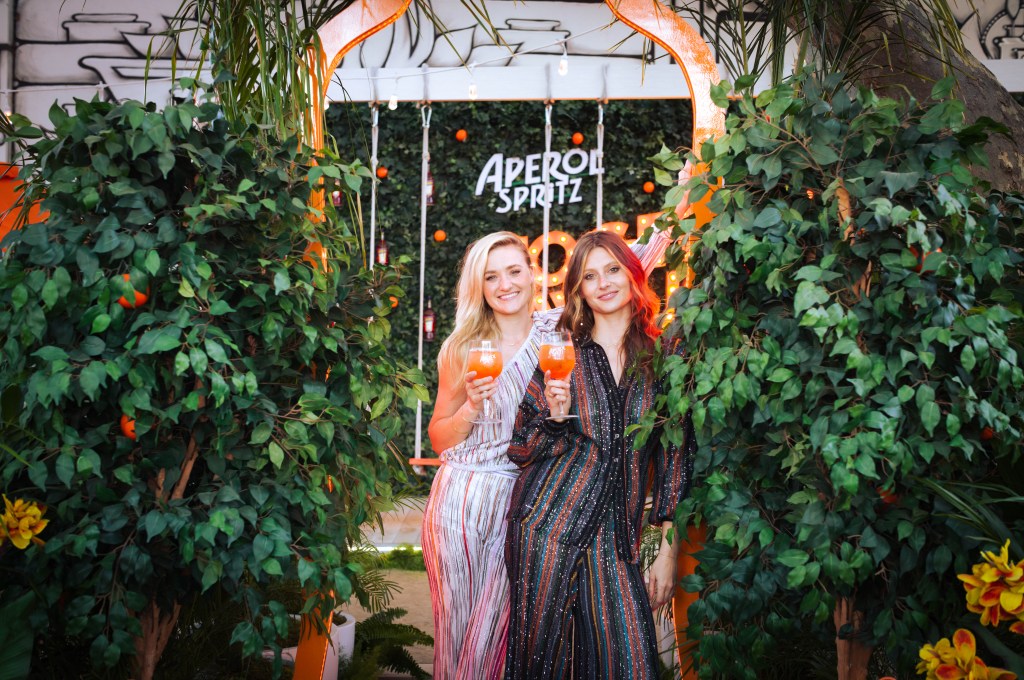 
Aly & AJ spoke to Rolling Stone about finally getting back on the saddle touring, the SoCal-inspired sounds of their latest album, and what, exactly, defines a “song of the summer”.

So why is this the Summer of Aperol for you both?

Aly: We’re actually not huge drinkers ourselves. So when we do drink, it’s usually an Aperol Spritz. We always have Aperol and Campari on our rider, like, it’s literally in our dressing rooms. We even introduced our band and crew to the Aperol Spritz.

Aly: I don’t think they even knew what one was. Now it’s like, “Aperol Spritz, or Negroni?”. You choose your own adventure [laughs].

AJ: I think it all kind of started in Italy. We were talking about this the other day, but the first Aperol Spritz that was had by us was when Aly got married in Portofino. And I feel like that’s what kicked off the love for it.

Aly: It’s this wonderful, orange-tinted, bubbly drink. I had my first sip and I was immediately like, “okay, so this is my drink of choice.” When you’re in Italy, and obviously in the summer, it’s just perfect.

These past two years have been such a great time of artistic growth and experimentation for you two, but you’ve also dealt with setbacks like rescheduled tours and isolation. So what does it mean for you to be touring right now? What is your favorite aspect of being on tour?

Aly: It’s a grind. I mean, it’s really tough. We have been touring for years and we really enjoy it. But taking that two year gap from touring because of the pandemic and then coming back into it, it’s kind of shown us that every business has completely changed. When you’re out on the front lines doing what you do, you’re directly affected by it. So Covid has changed everything for us, but at least getting on the stage and performing the shows, that feels the same. If anything, that feels heightened, because fans are so excited to hear live music for the first time in two years that I really think our live show has been really special the last couple of months. We just finished, I think show number 30? And BottleRock was an absolute blast. You know, Aly and I are kind of new to the festival scene, so to be able to play some of these outdoor venues really feels like it’s fitting for the type of album we made. There’s something about A Touch of the Beat and the color scheme and the backdrop that I feel has brought a lot of joy and excitement and love to all these random spots that we’ve been heading up over the last two months.

A Touch of the Beat has very SoCal, Seventies-inspired, invigorating vibes to it. Why did you reach for that kind of sound when you were putting together the record?

Aly: I think we were very much in that headspace. This was all before the pandemic hit, too. There was this joyfulness behind the songwriting process and the collaborations that we had going on with the co-writers that we were working with. We did a lot of writing in Los Angeles and Denver specifically. And then obviously when everything shut down, we had this full record that was pretty much ready to go, or just needed to be recorded. It was, I think, this nice reprieve from all of the hopelessness and the isolation that everybody was experiencing at home. It was this kind of wonderful juxtaposition that we had this record that was really happy and joyful, with this time in our country and around the world where everybody felt alone and unsure of what the future held. So it was the the perfect meeting of key moments for us, really. 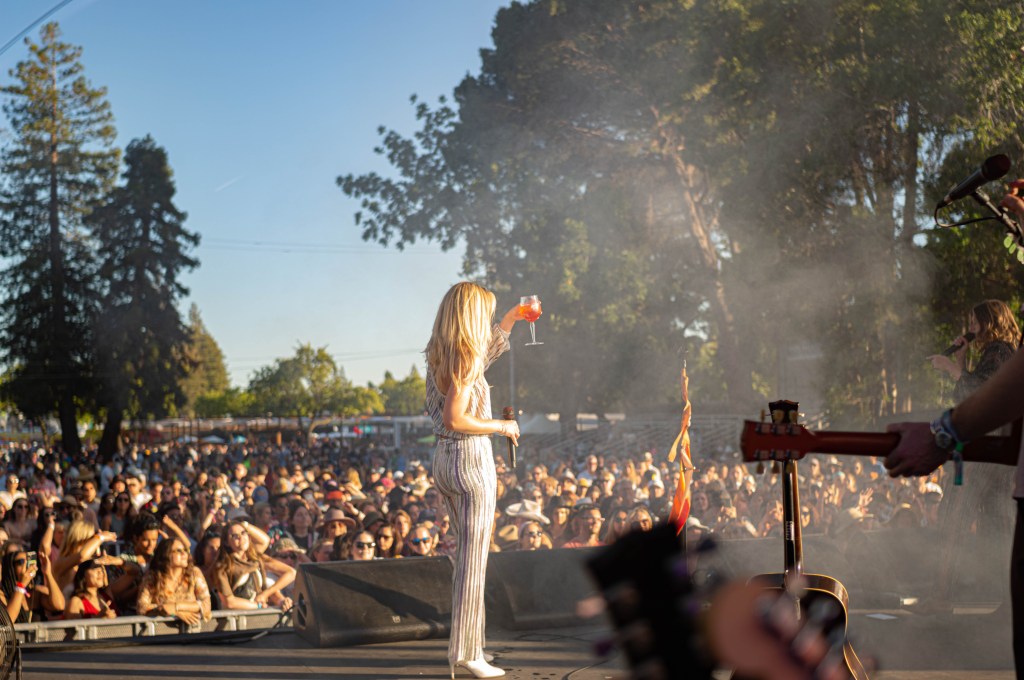 That makes a lot of sense, because I know you’ve also said in the past that you feel very close with your fans. You’d probably grab a drink with them. Have you had any particularly memorable or funny fan experiences over the past few months?

AJ: We do have a lot of really special encounters with our fans.

Aly: We had two fans propose right in front of us, which was really lovely. That was really nice. One couple at a meet and greet and the other on stage at a show. A lot of the fans know my dog Bixby, so he’s become a little mini celebrity, which cracks me up. If I’m at a meet and greet, some people go to greet him too [laughs]. We’ve had many wonderful moments that are really touching, and very personal and brave in terms of fans sharing their journey with us. Or their struggles too, maybe coming out to their family members, or overcoming suicide. I think those are just incredible moments for us to stop and realize that this is really the reason why we make this music. Obviously, we want to put out music that feels good for us to perform, but at the end of the day, it is really about how it affects the fans.

Then how does it feel to have this entirely new generation experience your music through something like TikTok?

AJ: It’s pretty wild. We weren’t expecting this kind of new life with our old music. It just shows that the music we wrote years ago still matters to people now, which makes us feel incredibly well as songwriters. I also think that people are now really getting to know and love the new material, which is special as we continue to grow as writers and performers. People are really accepting of the new music. We end every show with “Potential Breakup Song” as an ode to the TikTok craze, especially with the new and improved version. It’s a special ending to the set. But I can tell people are really yearning for the new stuff, too.

The Aperol Spritz is such a classic summer drink, especially to go along with your summer setlist. Why do you think people are so obsessed with finding the song of the summer, and what do you think defines one?

Aly: It’s a song that makes you feel good, something that you want to put on when you’re driving in your car to the beach or when you’re laying out with your friends having a drink. But there always is, like you said, a song of the summer. I do feel like a lot of songs on this record feel like that, especially for our fans. They’re very uplifting “get out in the sun, have a great day”-kind of vibes.

AJ: And you can’t really seek it out, either. It’s a song that has to come about in an awesome, organic way. I felt like even our “Pretty Places” is the perfect kind of summer song, and this was five years ago. We always knew it was a really special song, and we just held on to it. Now we feel like it’s the star of A Touch of the Beat, and it opens the show. Our fans have really latched onto that song, and I do believe that it’s become a summer anthem for Aly & AJ fans.

When you’re performing together, you have such great energy, and you really feed off of each other. After all these years, is there anything that still surprises you about working with each other?

Aly: I don’t know. Not a lot. Nothing surprises us because we’ve been doing this for so long. But every once in a while, you know, there might be a vocal riff or an ad lib that one of us tries that night that we’re like, “oh, that’s great”. Something that came out of absolutely nowhere. Or something we wrote. Or a melody line that will kind of throw us, but in a good way.

AJ: We still get impressed by each other. Which I think is good to always keep that alive.

If you had to describe a song off of A Touch of the Beat as a cocktail, which one would be the Aperol Spritz?

Aly: What’s interesting is in the “Don’t Need Nothing” video, we have a whole array of drinks and cake, and we actually had Aperol and Campari that show up in the music video. So for sure “Don’t Need Nothing”. It’s kind of amazing that we had that set up in that video before [this partnership]. We also already knew how to make the perfect Aperol Spritz, like the 3-2-1 [three parts Prosecco, two parts Aperol, one part soda]. You can’t do the wrong ratio on the items or else you’ll have a messed up spritz. So now we’re kind of like, spritz bartenders.

AJ: We were doing the Zoom cocktail hour thing a lot during the pandemic, and when we really got into it, Aperol Spritz would be a go-to. But the baking bread thing, and some of those other pandemic hobbies, those completely fell by the wayside [laughs].

Elizabeth Warren on Biden’s student-debt relief: ‘Sure I argued for more’ but it should...

Seo In Guk Shares First Impressions Of “Café Minamdang,” Talks About His Character, And...

Ruben Randall - December 17, 2022 0
Money
LIONESS by Beth Mead (Seven Dials £20, pp260) That was quite a day for the Lionesses back in July when England won the women’s European Championship....