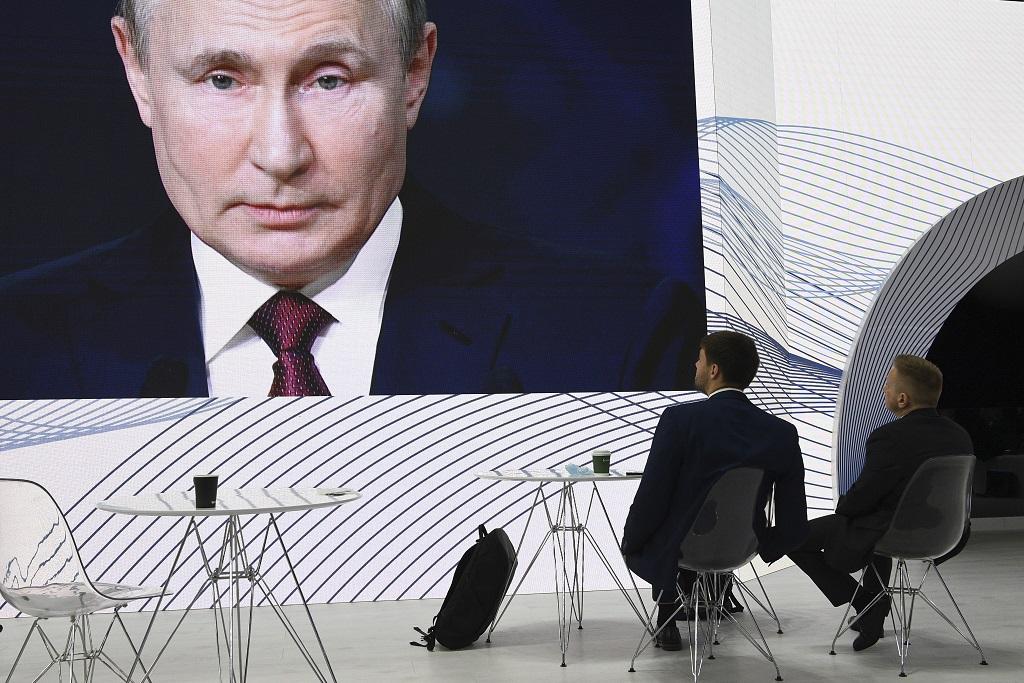 Sometimes, albeit rarely, 280 characters is exactly the right amount of space to make a crucially necessary intervention on America’s political discourse. Case in point, from comic Robby Slowick: “Bittersweet announcement but after an amazing 2 years as an infectious disease expert I am moving on. I am now an expert in no-fly zones and Eastern European affairs. Excited to make the most of this new opportunity.”

Yes, of course, journalists have always acted as if it required an hour or two for them to “get up to speed” on whatever issue interested them: nuclear fission, the internal politics of Moldova, or the infield fly rule. And yes, that is intensely annoying. But academics, many of whom devote their entire lives to trying to understand a single topic—and often complain about just this tendency in journalists—should know better. They should understand, based on their own professional experience, that various complexities that are invisible to all but those who have immersed themselves in their subjects are bound to interfere with the kind of dime-store, simplistic analysis that rules the day in our punditocracy’s discourse. The proper reaction, therefore, ought to be to stay at least in the vicinity of one’s lane when mouthing off on social media.

But it turns out the opposite is true. I can’t tell you how many people in my various networks whose subspecialties have nothing whatsoever to do with anything related to Russia, Ukraine, or war are mouthing off like Nate Silver on the intricacies of epidemiology. They need to take a chill pill and listen to people who’ve put in sufficient work to know what they are talking about. It’s bad enough that our cable networks don’t care, but the members of our scholarly and professional networks certainly should. Respect for expertise is, after all, what they’ve devoted their entire professional lives to.

Listen people, it’s time to get out more. Your Twitter followers, Facebook “friends,” and members of your listservs are not really your friends, and no one on any social media network cares how you “feel” about Putin, Biden, or Trump. Why not make some real friends, or maybe go to the movies? (I recommend Parallel Mothers, Licorice Pizza, and Drive My Car.) But however you decide to spend your time, please stop pontificating on Twitter et al. about things you know as much about as Donald Trump knew about drinking cleaning products. It’s just another form of pollution and minimizes our already minuscule possibility of having an intelligent public conversation about the extremely difficult and dangerous problems our country faces. In The Atlantic, we find a fuller account of a similarly annoying phenomenon, here.

One thing I will venture to say about Russia’s invasion of Ukraine—staying in my lane as I do so—is that it should give us cause to rethink the Cold War. Sure, the Bolshevik Revolution looked awfully frightening to American elites in 1917, given its take-no-prisoners, anti-democratic embrace of mass violence (and especially when they started murdering the members of the Romanov family). But by 1924–1925, when Stalin had consolidated his power and declared his dedication to “Socialism in One Country,” it ceased to be a significant threat to anyone in the United States. All of the “Red Scare” hysteria could have been avoided if we had just accepted the fact that the Soviet Union was still just the Russian Empire, and that its post-Lenin/Trotsky ideology was just a gloss to justify what any Russian autocrat would have wanted to do anyway. We would be a far healthier democracy today and millions of people would not have died in unnecessary, counterproductive wars if the U.S. had shown more self-confidence in its own values and beliefs rather than feeling that we had to counter the Soviets everywhere of their choosing.

I say all of the above because, while I know we would all love to see Putin gone, either in defeat or in retreat, no one can really be sure how that might be accomplished without setting off World War III. The Ukrainians can likely wage a spirited guerrilla war against a Russian occupation and drive up its cost over time, but it’s hard to imagine they can defeat an army eight times the size of their own in conventional warfare should Putin decide to go all out. In the hopes of avoiding that—or worse, of somehow inspiring Putin to respond to his army’s failure so far to capture the country by setting off a few tactical nuclear weapons—well, all I can say is I hope nobody in a position in power is taking seriously all the dumbass suggestions I keep seeing on social media. (It hardly needs saying that by far the stupidest of these have come from this man, though if you check the media coverage of his remarks, you will find it typically respectful, in the manner one treats the words of infants who have just learned to talk.)

The fact is that no one seems to know whether Putin is politically vulnerable inside Russia, or what he might do should he turn out to be. We don’t know if he can be overthrown from within or even if the Russian people would want that. Our intelligence agencies appear to be guessing on the basis of their own ideological predilections, rather than reliable data. Putin is a one-man show and were I to play poker with him, I’d have no choice but to play the cards and not the man. And our cards are all lousy.

Perhaps it is true that the Russian people would wish to get rid of him if they properly understood the crimes he has committed and the irreversible damage he has done to their country. We don’t know that either. What we do know is that such information won’t be available to them, because in Russia, just as in the United States and much of the world, democracy is in rapid retreat.

I know this because I’ve been reading the new detailed report by Varieties of Democracy (V-Dem), “Democracy Report 2022: Autocratization Changing Nature?,” based on over 30 million data points for 202 countries from 1789 to 2021. It enlisted over 3,700 scholars to measure hundreds of different attributes of democracy and found that “the level of democracy enjoyed by the average global citizen in 2021 is down to 1989 levels,” and “the last 30 years of democratic advances are now eradicated.” Dictatorships now govern 70 percent of the world population—5.4 billion people. The number of liberal democracies, which were rising up until 2012, have since fallen to their lowest level in more than 25 years and now account for just 13 percent of the world population. (And I think they are still counting the United States.) The democratic decline, the authors note, is especially evident in Asia Pacific, Eastern Europe, and Central Asia, as well as in parts of Latin America and the Caribbean.

Cancel culture is dumb and destructive and should always be opposed, but:

(a) It happens far more on the right than on the left.

(c) No matter how bad it may be in elite universities, it is nowhere near as important a problem as the editors of the New York Times op-ed page seem to think it is. And once again, I repeat, it’s a scandal how much journalistic attention is given to schools like UVA and Yale, etc., when the vast number of students in American colleges attend non-elite, usually public universities that are criminally underfunded. I like to think I teach at one of the best.

(d) Ms. Weiss should watch her back. (I borrowed that one from someone on Twitter, but I forget who.)

I’m a little late in mentioning this, but has anyone in the world had a better year than Paul McCartney? Just a few months ago, he was thought to be the guy who broke up the Beatles with his bossiness and refusal to go along with the business plans the other three had agreed to, and hence being the first to announce publicly that “the dream was over.”

Thanks to the release of Get Back, we now know that it was Paul who actually held the Beatles together as long as it was possible to do so. By the time of the 1970 breakup announcement, John had already informed the rest of the band that he was leaving to pursue projects with Yoko. (What’s more, George’s blossoming songwriting talent had become uncontainable in the band any longer.) But Paul’s a hero now, thanks to the charm and intelligence on display in the documentary in keeping things together, but also the way we got to see him write “Get Back” in front of our eyes like the insanely handsome genius he still clearly was. In the past few months, the 80-year-old mop top has enjoyed elder-statesman treatment from David Remnick, Terry Gross, and Rick Rubin and can be seen in superhuman size (and charm) with the rest of the boys in the terrific IMAX version of the Rooftop Concert currently traveling the country. Here’s Paul doing his greatest post-Beatles composition. He’s also touring this summer. Maybe I’ll see you in the cheap seats.