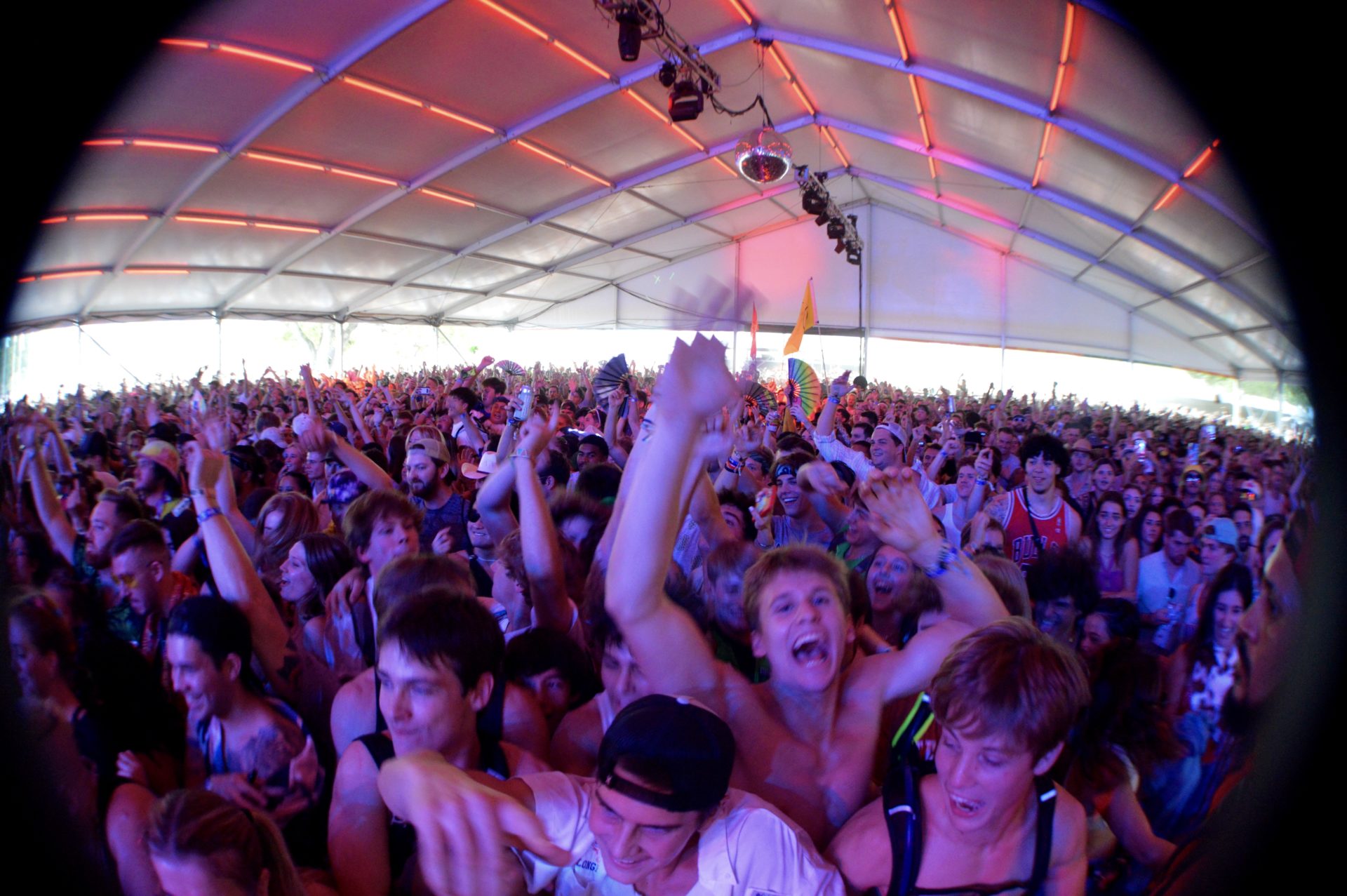 Austin City Limits made its 2022 return with its first weekend on Oct. 7-Oct. 9. W1 was a major success and featured some fantastic performances from huge artists, as well as lesser-known artists and local bands from Austin.

Day One: ALL THE STARS

The festival started really strong on its first day with great performances from Jazmine Sullivan, who got the festival hyped up with her ever-popular “Bust The Windows” and Carly Rae Jepsen, who gave crowd-pleasing performances of iconic songs such as “Call Me Maybe” and “I Really Like You”.

L’Impératrice, a French pop band, was a standout performance for the day as well. While some listeners were unfamiliar with the band and their music, the energy they had on stage was undeniably contagious. Their music is so danceable, and they really gave the audience a taste of what it is like to party with the French.

Later, Noah Cyrus blew Austin away with her amazing alto vocal range. She sang “Make Me (Cry)”, “Again” which features XXXTENACION, and the “I Got So High, I Saw Jesus”, which features her sister Miley.

The most memorable part of the set, however, was not the songs. During the show, Cyrus saw TikTok star and Dallas native Brittany Broski in the audience. Cyrus said hello and told her she “loved her”. The pure joy Cyrus had hyped the audience up, and some fans were saying they “had to find her” after the show.

Other notable performances include Billy Strings, the guitarist whose name was on everybody’s lips. James Blake, who really showed off how talented of a singer and musician he is, sang “Retrograde”, “Mile High”, and a cover of Feist’s “Limit to Your Love”. Omar Apollo danced with the crowd to some of his newer songs as well as fan favorites.

Headliner SZA starts on a platform, singing “All the Stars” and “Supermodel”. The stage’s set is intricate, appearing as a ship. During the set, she encourages the audience to go to therapy and “asks everyone to find comfort”. She thanks the crowd for being there and says she “can’t believe” she’s headlining ACL, almost in tears. Finally, she ends the set with “20 Something”.

Then, of course, we got to see the beloved country girl band, The Chicks, as they won our hearts over with favorites such as “Wide Open Spaces” and “Cowboy Take Me Away”.

Day two was huge for fans of EDM. Diplo and Flume were some of the headliners on Saturday and gave performances to some of the biggest and most energetic crowds of the day.

Straight from Austin, Texas, The Past Lives took the stage in the early afternoon. Being a smaller band at a huge festival is a big deal that some may find intimidating, but The Past Lives did not come to mess around. They excellently showed that rock n’ roll is alive and well, and appealed to every age group in the crowd.

The popularity of TikTok was definitely noticed with fans eager to see songs that trended on the platform, such as Role Model’s “neverletyougo”, Conan Gray’s “Heather” and “Maniac”, Aly & AJ’s “Potential Breakup Song”, and Wallow’s “Are You Bored Yet?”.

Lil Nas X brought his best to Austin with “Old Town Road”, “THATS WHAT I WANT”, and “INDUSTRY BABY”. A dance break was included with just his backup dancers, in which they individually took turns dancing to icons such as Beyoncé and Nicki Minaj.

The night ended with pop-rock veteran P!nk; opening with an energy-filled  “Get the Party Started.” Other notable performances in the set included covers of “River” by Bishop Briggs and “Bohemian Rhapsody” by Queen. She also did an interesting mash-up of her song “Funhouse” and “Just A Girl” by No Doubt. P!nk ended the night on a harness and with an acrobatic routine over the audience while singing “So What”.

Sunday must have been the day everyone was waiting for–a few individuals ran as soon as doors opened. Fans were already waiting at the American Express stage’s barricade only a few minutes later. One fan said this would be her 15th time seeing Paramore, and she arrived at Zilker Park around 6:40 a.m. Other people were in Red Hot Chili Peppers T-shirts and hats.

Glove, a goth alt-rock band, might have lacked energy, but they made up for it with coolness, talent, and versatility. Each member switched instruments and almost all of them sang. Pinkpanthress, a twenty-one-year-old house artist who got her start only recently, by releasing songs on TikTok, performed for a crowd of teenagers and twenty-something-year-olds who were ready to dance to some of her most popular songs.

See also  What To Do: A weekend full of holiday activities

Goth Babe, an indie artist, was one of the highlights of the day. From great music to short clips of his dog Sadie on screen, to throwing cupcakes at the audience, it was truly unforgettable. He also said he donates the profits from his music to environmental organizations. He performed “All These Things I’ve Done” by The Killers as his encore, and ended the set with “End Summer”.

The Marías, an indie/neo-psychedelic rock band known for the song “Cariño” and their collaboration with Bad Bunny “Otro Atardecer”, gave a sensual and ethereal performance. The band’s lead vocalist, María Zardoya, kept the audience captivated as she sang, danced, and looked amazing. Magdalena Bay was another standout from day three. Featuring a robot onstage and science-fictional visuals, the synth-pop duo immersed us into their simulation with songs like “Secrets (Your Fire)” and “You Lose!”

Then, Paramore took the American Express stage. The fans’ faces lit up; they no longer have to wait. The moment has finally come. They start with their new single “This Is Why”. The song had come out a week before the show, yet it appeared the whole audience knew the lyrics already. They even performed their hit “Misery Business”, after vocalist Hayley Williams said they will no longer perform it in 2018. Williams also told the audience this was their first time playing ACL, and they were nervous about their performance being streamed on Hulu.

While the audience eagerly waited for Kacey Musgraves to take the stage, they received light-up bracelets. When she came on stage, everyone’s bracelets lit up, and got ready for the amazing night that was to begin. Musgraves started off with “star-crossed” from her most recent album star-crossed, complete with a flaming heart on stage behind her as she sang. She continued to sing some songs from her recent album and then transitioned into her holder music such as “Golden Hour”, “High Horse”, and “Same Trailer Different Park”. She performed more songs from the album Golden Hour, saying that it wasn’t planned but she was doing it “just for Austin”. It was a very emotional night for both the audience and for Musgraves, mostly because we were in Musgrave’s home state and because Musgrave’s discography consists of a “bunch of depressing songs”, as Musgraves put it. The night ended with another extra song, as the audience was not quite ready to let the singer-songwriter go just yet. She gave a moving performance of “Slow Burn” and said goodnight.

After, legendary Red Hot Chili Peppers take over. The band has been on a world tour since June. This would be lead guitarist John Frusciante’s first Chili Peppers tour since his return in 2019. The band starts off with an instrumental, then fades into “Can’t Stop”. The crowd goes wild as soon as the guitar intro starts. Drummer Chad Smith has a bass drum with a hawk that has “Taylor” in the middle, a tribute to the late Taylor Hawkins. Flea does a handstand right before their last song, which was “By the Way”. Chili Peppers mysteriously ended their show about 20 minutes early, and fireworks popped with no one on stage. Red Hot Chili Peppers release their new album Return of the Dream Canteen on Friday, Oct. 14.